I saw a double rainbow the other day. 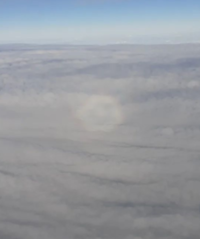 Overhearing Mrs. egg_ in a work meeting on zoom talking about "mileage in kilometers" and sniggering smugly to myself

going freelance has been the best thing i've done workwise recently. so much bullshit cut out of my working day 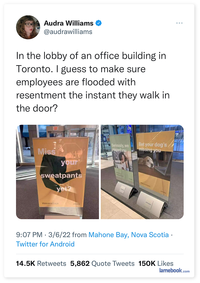 Blue murder in my dept as we're forced to go back to the office minimum of 3 days a week from April. Pretty much whole organisation is not public facing so bit of a headscratcher.

Scientician 0.8 said:
Blue murder in my dept as we're forced to go back to the office minimum of 3 days a week from April. Pretty much whole organisation is not public facing so bit of a headscratcher.
Click to expand...

rettucs said:
I would wager that many people are already doing up their CVs
Click to expand...

My colleague was in the office today for the first time in exactly 2 years and found the blackest banana in Christendom on her desk.

Scientician 0.8 said:
My colleague was in the office today for the first time in exactly 2 years and found the blackest banana in Christendom on her desk.
Click to expand...

Had to do a week away. Then they said "Oh, actually now that you've accepted it, we're only paying half the PD's we said we would, oh and also Sunday is cancelled".

So we agreed to something which wasn't what we got, and everyone was then pissed off and hard to motivate. Dragged everything down. Bad morale probably costed tens of thousands.

Hopefully next week will be better, less people = less dickheads.

But shouldn't people be pissed off, when the terms they'd agreed to were changed as soon as they agreed to them?
G

Cormcolash said:
But shouldn't people be pissed off, when the terms they'd agreed to were changed as soon as they agreed to them?
Click to expand...

Cormcolash said:
But shouldn't people be pissed off, when the terms they'd agreed to were changed as soon as they agreed to them?
Click to expand...

Of course we're right to be pissed off. Don't help the job get done though.

Had someone from my old job drop me an e-mail today asking for help figuring something out because nobody there knew anything about it and to be fair it is confusing. Happy to help as I sort of still work with them just not for them and they're mostly a good bunch of people.

Thirty minutes later someone different from old job sends me a 30 minute meeting request seeking assistance with some SharePoint permissions. Nope! I politely pointed out there is a helpdesk in the organisation that assists on issues like that and hope they got the message that you probably shouldn't be sending meeting requests to someone who no longer works there!

I left my “work” in the hands of a few 20 year olds for a month. I kind hope it burns down in my absence…. Of course only if my fur babies are out for a walk at the time.
S

re previous post, the client asked that I get paid extra for what I did, and I'm going back for another week of a cosy hotel and a bath where someone else pays for the immersion. My employer told me that they were asked to make sure I got paid a bonus, but they did not oblige.
I did get a slight raise, but not enough. My employer outmaneuvered me during the pay negotiation. Soon.

In any case, my jiggered back and dodgy mental state are much improved. Apparently doing something I actually give a shit about helps my mental and physical health. It was one of the most physically and mentally draining things I've ever done. And I've been to Russia ffs. Yet, it has improved my well-being.

The flipside, I was assigned to help some lads from Manchester who'd come down to London to do a really busy weekend in London. Even if everything had gone to plan they would have been working pretty much a straight 50 hours. And doing it for non-London wages. Everything didn't go to plan, one of their vans got stolen from the hotel carpark. It was full of empty flight cases, so all their kit will definitely get broken on the journey back up to Manchester. I hope they have a gullible insurer.
All the Manc lads were absolutely destroyed. Most of them were mates of mates of the boss, so they thought a weekend in London would be a laugh, poor feckers. The main one was puking and utterly demented just from stress. I'd never seen anything like it. Puts things in perspective. My job is kinda shit, but it could be shitter.

Next week will be 4th and last 60hour week in dublin
(Mon fri 7-7).
The last 3 have me rundown, miserable and longing for home.

Most badly run site I've ever been on. Too many chefs etc.

Lads, yiz are making feel me v grateful for the job I have
S

egg_ said:
Lads, yiz are making feel me v grateful for the job I have
Click to expand...

Well, you should be. Hustling is hard, as my young Manc associate discovered this weekend. I think there's a lot of people who are self-employed/run a business who've read a book about business management and not gotten past the bit about Maslows "self actualisation"*. Then real life hits them.


For me, this is where I'm at. Every good thing is appreciated all the more, every bad thing is something I've seen before. I am old.

Anyone any tips for toilet unblocking?