“They promised me an island if I did this,” says a weary Serena Williams, making a random cameo appearance as the punchline to a terrible joke in Adam Sandler’s latest comedy vehicle, Pixels. I sincerely hope she isn’t the only one who got an island out of it, as that’s really the only excuse for appearing in one of the laziest, nadir-of-cinema Hollywood marketing exercises in recent memory.

The funny thing is, it didn’t have to be this bad. It even starts promisingly, with a montage of ‘80s movie kids sweatin’ to the oldies in their local arcade to the rousing, pounding power-pop soundtrack of Cheap Trick’s ‘Surrender’. There’s a big video game tournament, y’see, with the winners seeing their top performances rocketed into space in a time capsule. And young Sam Brenner’s got it all sewn up, it seems – till his crushing defeat in the final at the hands of the cocky ‘Fireblaster’ Eddie Plant.

Thirty-some-odd years later, Brenner (Sandler) has well and truly whittled away his promise – video games being the only thing he was ever good at, apparently – and is now a dumpy middle-aged schlub installing home entertainment systems in a uniform best described as ‘dayglo UPS’. He also happens to be best friends with the President of the United States (Kevin James) because that’s funny, right? A work-a-day stiff is tight bros with the Leader of the Free World, eh? Why aren’t you laughing?

Anyway, Sandler’s schlub has an awkward meet-cute with Michelle Monaghan’s newly single mom slash ‘sexy librarian’ fetish before he’s called to the Oval Office by his bestie to consult on the latest threat to global security: an alien invasion in the form of giant pixellated video-game characters, just like the ones in that time capsule they recklessly shot into space all those years before (Stephen Hawking was right!). Sexy librarian lady is there too, because reasons, and soon enough the offensively creepy Ludlow Lamonsoff (Josh Gad, the poor man’s Jonah Hill) and be-mulleted ‘Fireblaster’ (Peter Dinklage) join the party as America (fuck yeah!) assembles a crack team of, well, guys who used to be good at arcade games to take on the CGI alien menace.

And the CGI is actually pretty good; the concept and execution of the giant blocky Pac-Man, Centipede, Donkey Kong and so on is a credit to the computer artists. That’s basically it, though. The unseen aliens pick a game to throw at them, Sandler and chums ‘remember the pattern’ to beat it, and repeat till the inevitable will-they-do-it finale. But dripping off that skeletal plot is a slimy, filthy contempt for the audience. It’s alarmingly transparent how much Pixels is a joyless, cynical cash-grab to get in on this new geek thing that’s happening. It’s like the Red Letter Media guy says: it’s cool to say you’re a geek, but not to actually be a geek.

Hence Pixels isn’t for geeks; it’s really a movie for jocks re-skinned with a bunch of old-school game characters you might remember (and many you probably won’t; Galaga is hardly a household name) and the humour is pitched accordingly, as is the sexism (one supposedly inspirational strong female character is purely an object of obsessive lust, and utters not a single word), the homophobia (Gad, the poor man’s Jonah Hill, plays to every bro’s fears of The Gay) and the racism (Pac-Man’s ‘creator’ is only included for the ‘foreign looking man talks funny’ bit).

So yeah, I hope everyone got an island out of this deal. I hope Michelle Monaghan and Ashley Benson (the aforementioned voiceless sex-bot) got a coral-ringed atoll or something for selling their gender down the river. I hope Peter Dinklage got himself a Mediterranean hideaway where he can take a break from filming Game of Thrones, which he’d better hope carries on for a few more years because his movie career’s fucked. I hope Jane Krakowski was promised an archipelago for the way she’s treated here, a fine comedic actor reduced to no more than a couple of scenes and as many lines of dialogue, completely superfluous to the boys-own plot. I hope poor Kevin James – who completely gave up after his passion project, MMA-themed comedy Here Comes the Boom, flopped hard – got himself an actual island someplace and not just one make of cake.

I hope director Chris Columbus got some tropical paradise, maybe next to Richard Branson in the Bahamas, for his part in this awfulness. “This is the man who made Back to the Future,” I thought before realising I was confusing him with Robert Zemeckis. I’m always doing that. It’s the Spielberg connection, I think. But this ain’t Spielberg. The guy who wrote Gremlins? Who made the Home Alone movies (only the first two count, but you know that)? He’s nowhere to be found in this witless shambles.

You know what? I hope even Adam Sandler got at least a rocky outcrop for his part in essentially eulogising his own career with this turgid pile. He literally says as much in a mid-film soliloquy wherein he confesses his character’s regret at throwing his potential away. With that puffy, sagging face, resembling more and more a human Droopy, the most passion he elicits here is when he’s crying for Brenner’s misspent youth. Or is his really reconsidering the bulk of his own life choices since, what, The Waterboy? Maybe he should take a holiday on his rocky outcrop to think about it, and stop making shit like Pixels. 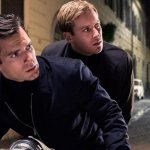 Previous
The Man From U.N.C.L.E. 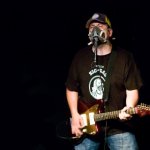 Next
Giveamanakick – We Are The Way Forward 10th Anniversary Reissue & Gigs