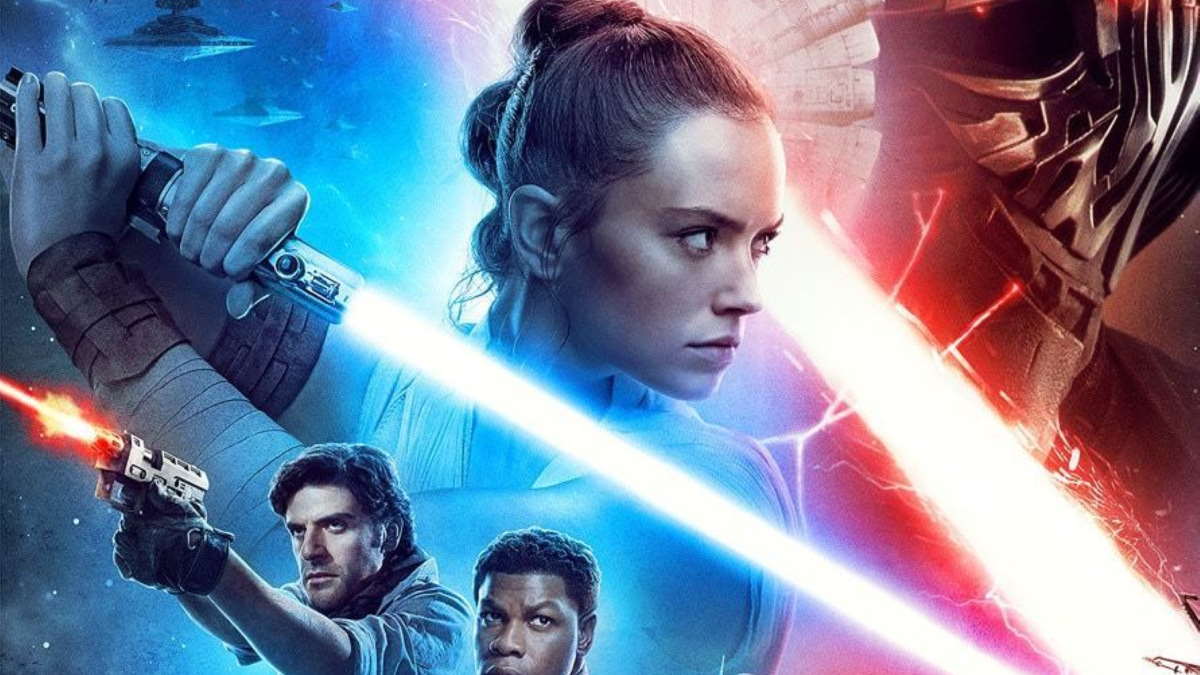 Star Wars: The Rise of Skywalker

A long time ago in a galaxy far, far away...

Star Wars: The Rise of Skywalker is “a definitive and worthy end to a beloved but troubled saga” says John Kealy

T.S. Eliot wrote of the world ending not with a bang but a whimper. The final Star Wars episode (in the main franchise at least) is not quite a whimper but despite the presence of several impressive-looking explosions, it is not a bang either. It is a slightly frustrating but entertaining exercise in nostalgia, as new characters’ stories draw to a close while old favourites are shoe-horned in whether it works or not.

In the previous installment, Luke Skywalker tells Rey that “No one is ever really gone”. This sums up The Rise of Skywalker. It covers the redemptive struggle that exists in the duality of Ben Solo/Kylo Ren (played by Adam Driver), and his complicated relationship with Daisy Ridley’s Rey. It also covers the incorporation of old characters with varying degrees of success; Emperor Palpatine is very satisfying but Billy Dee Williams’ return as Lando Calrissian falls short in terms of how he is used (Williams is clearly having fun though).

Unfortunately, “No one is ever really gone” also means that the number of false deaths and misdirections that run through the series greatly diminishes any real losses when they come. Often, real pathos and emotional heft is jettisoned  as what once were important and cherished characters return as Harry Potter-esque Force ghosts. When a major death does happen (and I’m trying to be as vague as possible here for those who have yet to see it), it ends up feeling a bit “So what?” as opposed to the punch to the gut that it could have been if there had not already been so many instances of characters cheating death.

Ultimately, The Rise of Skywalker suffers from a kitchen sink approach to writing. It feels like there are far too many characters chucked in for little or no benefit. Dominic Monaghan’s Beaumont Kin appears to exist only to make gormless reaction faces when required and Keri Russell’s Zorri Bliss is this trilogy’s Boba Fett – looks cool but does not get to do a whole lot. At the same time, new characters who have been developed in The Force Awakens and The Last Jedi are left on the shelf. Lupita Nyong’o’s Maz Kanata hangs around the Rebel base but that’s about it while Rose Tico (Kelly Marie Tran) gets to join in on the fights but her potential relationship with John Boyega’s Finn seems to fizzle out bizarrely.

While I found in The Last Jedi that the struggle between Rey and Kylo Ren was becoming too drawn out, Ridley and Driver’s performances drive The Rise of Skywalker and really make the movie. Their psychological and physical battles are up there with those of Luke Skywalker and Darth Vader in terms of spectacle and surpass the original trilogy in terms of dramatic depth. Without giving anything away, the characters’ arcs bring a satisfying conclusion to the series and manage to bring meaning to what seemed to me like a dramatic misstep in The Last Jedi.

Visually, The Rise of Skywalker is impressive as it bucks the trend in terms of special effects, using practical effects and puppets in places where other mainstream blockbusters would have plumped for CGI. This immediately creates a sense of immersion that brings back the warm fuzzy feelings I associate with the original trilogy (before George Lucas decided to use them as sketchbooks for his CGI-laden prequel trilogy). Even outside of special effects, creative camera shots create a sense of excitement and atmosphere that help the film from suffering too much from its overblown plot. One particularly effective scene sees our heroes shooting their way up a corridor as the camera tracks back along the floor, bodies falling between us and the action as the Rebels blast their way towards the fourth wall.

One place where the use of special effects arguably worked too well is with the incorporation of Carrie Fisher into the film. The unused footage has been incorporated perfectly from a visual perspective, it is impossible to tell that she was not filmed on the same sets. However, this feat of technology is ruined by a combination of obvious stand-ins shot from behind or in silhouette. Fisher’s inclusion is also let down by the frankly dreadful dialogue clumsily built around whatever lines they had available. This is exemplified by a painful joke when she asks Rebel pilot Temmin “Snap” Wexley to “Be optimistic” and he replies with an over-the-top dose of sarcasm. It made me cringe so much I almost turned inside-out.

Despite its flaws The Rise of Skywalker is at least a definitive and worthy end to a beloved but troubled saga. The latest trilogy undoes a lot of the artistic damage inflicted on the original trilogy by Lucas through his later edits and more than makes up for the psychic trauma suffered by his audience with the prequel trilogy. I suppose my feelings for the new trilogy and The Rise of Skywalker are best summed up with the thought that went through my head as I left the screening: If I was in charge I would have done it differently. With so much expectation, it is impossible to outdo the worlds and scenarios we built in our own minds over the last few decades.