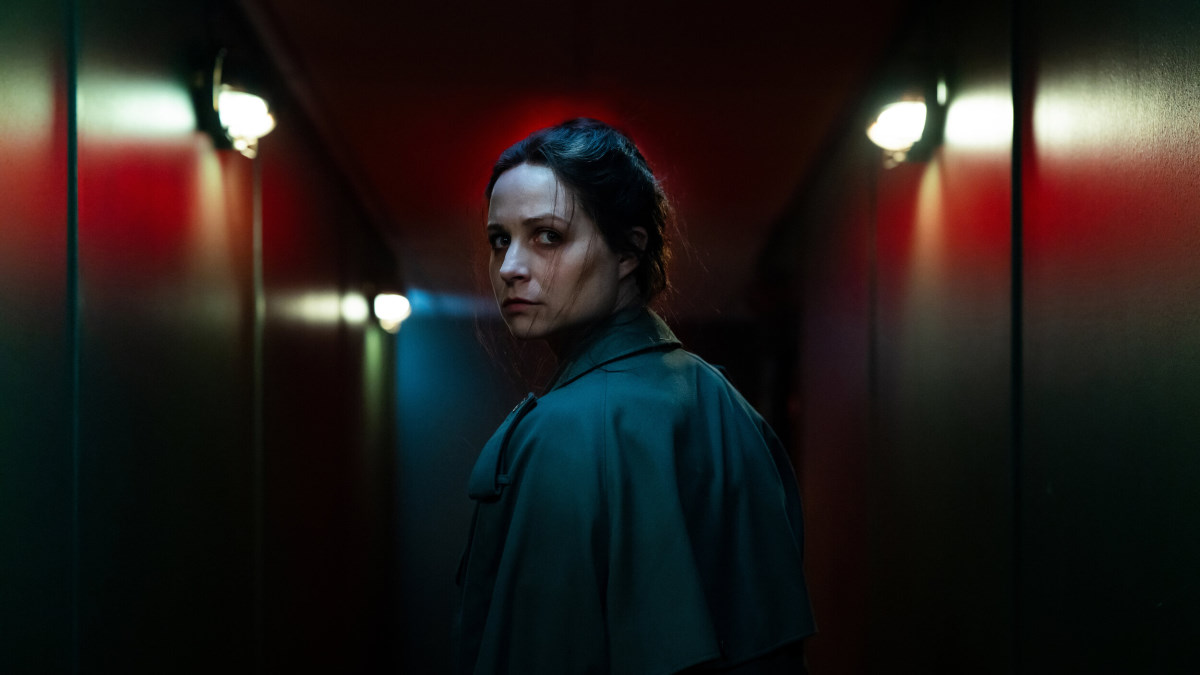 Decapitation? Fine. Skull-drilling? No problem. Disemboweling? Go right ahead. Eye Gouging? Not sure, we might have to cut some of that.

These are not the sorts of aesthetic judgements most of us have to spend much time thinking about, but it’s all in a day’s work for Enid (Niamh Algar), the titular film censor of Prano Bailey-Bond’s arresting debut feature. Censor is set during the drab days of Thatcher’s Britain and Enid’s job, at what we assume is the British Board of Film Classification (BBFC), mostly involves poring over the dubious outputs of the so-called “video nasty” horror genre. The video nasty boom of the 1980s, and the subsequent moral panic over it, was fueled by what we would now probably call a case of technological disruption. The new phenomenon of home video did not initially fall under the remit of the existing classification and censorship systems, allowing viewers to watch whatever they wanted from the comfort of their own homes. It also allowed film-makers, or at least those not concerned with mainstream acceptance or theatrical release, to indulge themselves in whatever outré notions took their fancy. The results were both spectacular and spectacularly awful.

At the time Censor is set, the regulatory systems have reasserted control, and so Enid and her colleagues must decide which films will pass with 18 or 15 certificates, which ones will require significant cuts, and which ones are so beyond the pale that they will be banned outright. The banned ones never entirely disappear however: they are merely consigned to a clandestine brown-envelope life under the counter of the many video rental stores still willing to illegally trade in such damaged goods. It is one of these outlets that Enid has to resort to in order to locate a copy of a film by the elusive director Frederick North. Enid has previously been traumatised by viewing North’s latest piece of work, submitted for classification by the magnificently creepy producer Doug Smart (Michael Smiley). She is determined to find out everything she can about North, as she sees eerie parallels between events depicted in his film and the disappearance of her own sister when they were both children. Niamh Algar (who recently rose to prominence as a result of Ridley Scott’s ambitious but tedious sci-fi TV epic Raised By Wolves) is excellent as Enid – deftly conveying the repressed anguish that has resulted not so much from the pulverising violence she witnesses on screen everyday, but from her own guilt at what she sees as her failure to protect her younger sister all those years earlier.

Censor beautifully recreates the dull surrounds of 1980s Britain (it’s a period film in all but name), particularly in the stilted scenes between Enid and her parents, who live a ghastly life of suburban bungalow bliss only occasionally enlivened by visits to a poorly wall-papered restaurant that some relative has assured them is “really very good”. This is the true horror of Censor: a peculiarly British sense of mundane unease occasionally spilling into outright terror, familiar to us also by way of the films of Ben Wheatley and TV shows like The League Of Gentlemen. Bailey-Bond further contextualises things with some brief footage of Thatcher’s attack dogs being let loose on the striking miners, reminding us that while the likes of Mary Whitehouse were up in arms over the corrupting effects of onscreen violence on children, there were real heads being bashed in and real lives being ruined, and all this was happening out there in a society that was not supposed to exist.

The film itself is anything but dull though. The dreariness of the surroundings only serves to accentuate the gleeful extravagance of the Giallo-style violence that happens both in the films Enid is watching and as a result of the chain of events set in motion by her investigations. Soon enough the boundaries between onscreen and offscreen, fiction and reality, start to crumble and the interstitial zone we enter into is realised with verve and style. Horror fans will appreciate the many nods to other works – ones that similarly play on the uncanniness of the video format (Cronenberg’s Videodrome and Hideo Nakata’s The Ring) as well as films that trade more directly in the video nasty aesthetic (Sam Raimi’s The Evil Dead). The fact that the climax of the film takes place in the proverbial cabin in the woods (complete with meathooks and axes inside) will either satisfy or annoy depending on how postmodern you like your horror films to be.

While there is much to admire and enjoy about Censor, it’s never really scary. A movie about a movie is never going to take us into that territory where we need to keep reminding ourselves that what we are watching is, in fact, only a movie. What it reveals very effectively is that horror needs an element of ambiguity to succeed. The reason the video nasty genre was so unsettling (and perhaps threatening to some) was that the clandestine nature of it meant that we were never really sure of what we were watching or who exactly was responsible for making it. That slightly out of focus footage on that badly dubbed videotape is probably the work of some young graduates fresh out of a film school with tongues lodged firmly in each others cheeks. But what if it really is the fevered imaginings of some disturbed maniac whose goal is to severely traumatise the viewer? And what if he is willing to go to any lengths to make that happen? What exactly is it we are watching here? And why?

Nowadays, the work of the BBFC is largely classificatory: those who work there rarely have to cut, much less ban, anything. That responsibility now falls to those policing the frontiers of newer disruptive technologies; and in line with the piously agnostic positions taken by the Internet platforms, we now have content moderators instead of censors. In the case of Facebook moderators, many of whom operate out of Dublin, this involves watching appalling footage day after day after day, and being offered little more than “wellness initiatives” to cope with the trauma (in one scene in Censor, after viewing a particularly disturbing and violent film, Enid’s colleague worries about the fact that she does not seem affected by it). It has recently been reported that not only are Facebook now outsourcing this work, allowing them to distance themselves further from any responsibility for it, but that those involved are forced to sign non-disclosure agreements that prevent them from even talking about it. Such is how that particular corner of the Internet is kept safe for the advertising industry. These parallels are what prevent Censor from being a purely nostalgic exercise. While debates over what sorts of films should be freely available or not might seem quaint in an era in which the whole concept of freedom has been weaponised by capitalism, concerns around regulatory responsibility, and the toll taken on those tasked with exercising it, seem very current indeed.