I saw a thing in the garden (4 Viewers)

I guess, I don't need to worry if the colony of 15 in the gaff is sustainable as you're all telling me.

I would ask is there something I can feed them without attracting rats etc.? I suppose I should probably just leave them alone. I have no access to where they're living. I assume that's the attic of my building.
M

They eat flying insects, so not much you can do, except maybe leave some rotting carcasses around the place.
S

I've been doing that anyway, just because.

egg_ said:
Mrs. egg_ is an actual bat-ologist. 15 bats all flying together in a city in England is quite a few. Any thing in particular you want to know?
Click to expand...

She loves all her subjects equally
M

seanc said:
I suppose I should probably just leave them alone.
Click to expand...

That's all you can do, really.

Thread starter
I made bat boxes a year or two ago. Bat notions.

egg_ said:
She loves all her subjects equally
Click to expand...

The dog found one of these. An Ichneuman wasp. Apparently they're quite common but I'd never see one before. 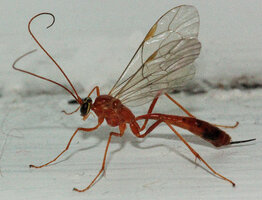 I used to find those yokes terrifying. Ok with them now, probably because my level of general dread is elevated enough that they don't add to it much

Hedgehog in the garden yesterday

There was a sparrow teaching its chick to fly in our front garden a few weeks ago. The mam (or dad?) would fly up the wall or over to the neighbour’s hedge and call out, and the little one would make a balls of trying to fly up; it was clearly a very new fledgling and hadn’t yet figured out how to make a running start so it kind of flitted up the wall to a foothold, then gave up and sat on the grass till the parent came back. I watched this for a while as I had to go out for something but the garden path’s right there and I couldn’t interrupt them.

Anyway, we’re a few tries and fails into this when the baby bird’s hopping around the garden perimeter takes it close to the front door, and there it is on the bottom of the door frame, just gurning up at me, no fear of me at all. And I was in a pickle, as there was no way its mam or dad was coming anywhere near me to get it.

So I grabbed a newspaper someone’d dropped in the door and kind of nudged it out, hopefully not giving it too much of a fright as it stumbled up the path at speed. The parent was waiting for it somewhere outside as I saw them reunited a few minutes later, then I turned away for a minute and they were gone, so hopefully the little one finally figured out where the gate was and hopped out that way for a better go at that whole flying thing.

Caught a couple of snails fucking in the greenhouse earlier

Just confirmed there are a couple of ravens living nearby. Two of them circled over the house for a few minutes last night. It took almost 50 years but I've finally seen ravens in real life.
T

We had an excellent little bat in the garden the other dusk, hoovering up all the insects.

One night I heard a load of splashing and ruckus, so I went out and there was a bat in my aquarium, kind of sinking, looking up at me with its little bat eyes doing the universal "I've made a huge mistake" face. I leave my balcony door and windows open, so I suppose the poor bollix flew in and... I dunno... tried fishing? Unclear.

Anyway I scooped it out, and tried to dry it off with my t-shirt, because it was all bedraggled and miserable with itself.

But then, out of nowhere, it decided it was Mr Fucking Cool again, and started doing this clambering thing with its wings (which have hooks on the joints I learned) and was getting all up in my face and looking fierce. So I sort of whooshed him off, and he started flying around in my apartment, so I fucked off to my bedroom and locked the door.

The next morning, there was no more bat. Job done.

magicbastarder said:
They eat flying insects, so not much you can do, except maybe leave some rotting carcasses around the place.
Click to expand...

If anyone ever finds all those dead prostitutes in the woods by me I've now got the perfect explanation.

Duck zonked out in the 38 degree heat the other day. Went over to see if it was ok and it looked at me like “back the fuck off bro”. 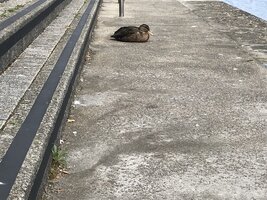 Users Who Are Viewing This Thread (Users: 2, Guests: 2)