Back in my primary school days, we once had a substitute teacher who was a bit handy with his organ. No wait, let me start that again. Back in my primary school days, we once had a substitute teacher who was more musically inclined than we were used to. He’d occasionally play tunes for us on a little Casio keyboard and encourage us to guess what they were. That was fun. And one time he invited a few of us who were interested to the church across the road, on the balcony high above the nave, to watch him tickle the ivories on its pipe organ. Okay, there’s no way to make that not sound dirty, I give up. Anyway, I didn’t think they’d let just anyone go up there in the middle of the afternoon and bang away at the keys, but that’s what it felt like we were doing, as I glanced back and forth between our teacher as he coaxed an impressive bellow out of those pipes, and the smattering of worshippers in the pews below, saying their Hail Marys or awaiting their turn in the confession box. Then Teach started into the overture from Dracula – Bach’s Toccata and Fugue in D minor, if you will – and I swear I could hear an aul’ biddy far beneath us gasp in horror. Oh, the sacrilege!

That memory, in a liminal haze between vivid recollection, dream and imagination, is what immediately filled my mind upon hearing the expanded edition of Áine O’Dwyer‘s Music for Church Cleaners, now a double LP (with download) from MIE Music. Originally released in 2012 on Paul Condon’s Fort Evil Fruit tape label, its seven tracks have been bolstered by an additional 10 meditations on drone and melody over 90 flowing minutes of music. Which is remarkable in and of itself since O’Dwyer – nominally a harpist, and frequent collaborator with Condon in long-running avant folk ensemble United Bible Studies – snatched those minutes whenever circumstances allowed her to sit at (and basically teach herself to play) the organ at a church in North London.

Typically her only audience on those Saturday mornings would be the cleaners prepping the chapel for the next service, which lends a tangible intimacy to these improvisations, as O’Dwyer expresses whatever sequence of notes inspires her at a given time, whether to explore its melodic possibilities or pause to reflect on the resonance and elegant decay of the pipes’ droning. It’s an intimacy given depth by the recurring deep background chatter, childish laughter and drone of cleaning equipment echoing from the recesses of the church, and occasionally broken by passive-aggressive moans about O’Dwyer “staying on one note” – betraying a wry, knowing sense of humour on the artist’s part that should help dispel notions that this is in any way ‘difficult’ music. It’s all beauty in song drifting on the river between joy and fear. Kind of like faith, I suppose. 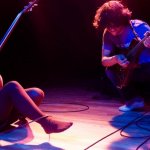 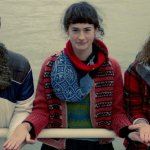 Next
This Is The Kit – The Workman’s Club, 6th March