Niall McGuirk on Interiors, “a perfect next step” for Quicksand

So let’s pretend you’ve read a review I’ve written before. You know I place emphasis on memories. I pay homage to an Irish era that was discovering the rest of the world. An Ireland pre-Celtic tiger. An Ireland where our nation’s confidence was only starting to build. The grey streets were starting to emerge from a monochrome wasteland, and people were finding an audience for views that didn’t blindly follow the establishment line. It wasn’t that these views were never there, just that the oxygen for them wasn’t.

We put gigs on under the name Hope Promotions, and bands were starting to come to Ireland for the weekend. Not just to play a big venue, party and then split to the next big town – these bands wanted to visit our country, they wanted to talk about our culture and would play anywhere. We would tell them to get the weekend special on the ferry. Travel over on Friday, go back on Tuesday and in the meantime we would get them visiting as many places as we could fit in.

And so, Quicksand visited ireland for a long weekend. We got them three Dublin gigs, one in Belfast and a night at the Dew Drop inn, in Kill. The band were enthusiastic about every minute they spent here. Of course the sound had evolved from the New York hardcore power of Gorilla Biscuits, and with the guitar playing of Walter Schreifels, Quicksand felt their way through songs. We went along with the mood and nodded back and forward. Maybe if we knew then what we know now, we would say emo core was taking shape, or at least realised that hardcore was having a post- stage. We didn’t know – we were evolving, our country was changing, and our taste in hardcore music was expanding.

(Walter returned a couple of months later as part of ‘Revelation Records New York Hardcore Band’ Gorilla Biscuits; their stay was shorter, as their ferry was due in to Cork from France, so the band could only squeeze a couple of days in. As happened quite frequently, and I’m sure this is the main reason phones are now used as navigation devices, Gorilla Biscuits missed their ferry and therefore their chance to play in the same venue that Nirvana would grace a short time after. I eventually got news to the booker of Sir Henry’s and agreed to pay for the p.a for the night. The band made it to Dublin for their Saturday afternoon show and it was pretty special. Come to think if it, we’re still owed that money…)

While our tastes may have been widening our view on major record labels weren’t. We travelled on different roads, and Quicksand went the Polydor and then Island Records route, while we stuck rigidly to our wild Atlantic way, and our paths never crossed again… Well, not really. Just cos I don’t buy records from major labels doesn’t mean I can’t listen to them. I looked but didn’t touch as two further albums were released. These post hardcore nuggets didn’t get the sales that record labels demand and the band faded though still remained hugely influential, while Walter kept doing what he knows best – playing music. 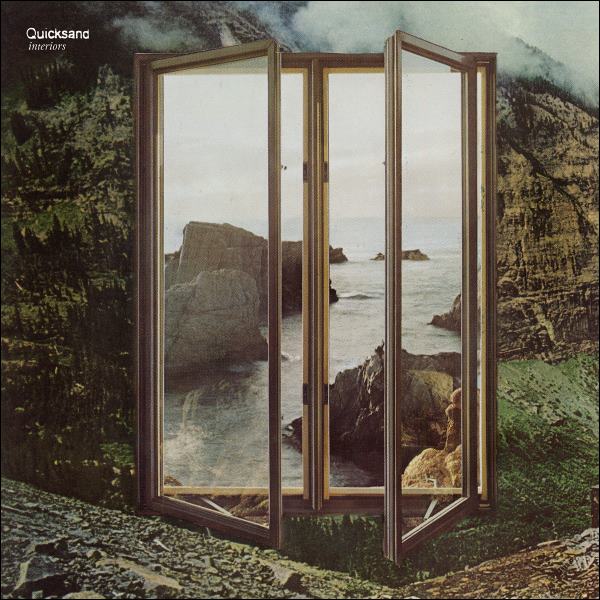 So we fast forward 22 years. Ireland is a multicultural rainbow, still with inherent problems, but we are a confident nation. Epitaph records has grown into a more professional set up than many of those major labels that disintegrated, and with the band playing a few gigs once more they have moved and set up a new home. A new album is now out. It grunges it’s way and moves through moods as the guitar chugs along with riffs and few chords. If you view yourself as a runner getting ready to run a steeplechase, or a jockey on a horse getting ready for the big jump, Quicksand will take you right up to where you’re going to take off and then bring you back to the start. And so it repeats, time and again. You won’t quite make the jump but your body will have a great workout along the way.

Interiors is a perfect next step for Quicksand. As it’s two decades since the last record, there is a slight – only slight – change in direction.  The vocals are lower in the mix and songs are a bit more about the mood. They still take you right up to that jump though.

Next
Battle of the Sexes