Paranoid Visions ‘are spitting their distaste for what is going on‘ – Niall McGuirk on their latest LP, Rebellion

“Dublins longest running punk rock band” is an accolade that means nothing unless there is substance to the band. Paranoid Visions don’t want or look for lip service to their longevity – they just keep writing songs and releasing good records. I wrote of their last release saying that they hark back to the grey streets of Dublin in the 1980’s; Paranoid Visions were a product of a city that wasn’t prosperous and was inward looking. That has now changed as prosperity moved to austerity and the divisions are as bad as they have ever been.

We seem to have moved into a situation where economy is king and society loses out to profit. “If it costs too much then why should we do it?” seems to be the acceptable mantra as our world moves from one where the state provides to one where people are now walking the streets feeding the homeless. Paranoid Visions’ Dublin is the one where people are taking control and taking matters into their own hands. As humans live and die on the grey streets, Paranoid Visions are singing about it. As we stumble from one crisis to another, Visions are spitting their distaste for what is going on.

The fear and hate in the city’s underground is where the album kicks off. “Are you getting the picture yet?” Deko and Aoife proclaim with their words being met with musical force of tribal drums and guitar rhythms, as if the punks are on a roundabout and have taken over the playground. The fascists will not cross this line. It is a sound repeated on Across The Holocaust with words reminding us about mass execution of 6 million people alongside Chaplins inspirational speech about fighting for better world. Paranoid Visions look at history and ask are we really condemend to repeate the mistakes of the past.

For a band with a strong presence on social media it is interesting that they have a song asking that we get off the internet and do something in the real world. Of course that real world is one of injustice and pain which Deko keeps reiterating.

The punk rock Paranoid Visions comes out in Greytown and Murder Most Foul. We can think of pogooing along to these, and all along Deko’s words are like the paste we used to put posters on the walls back in grey old Dublin. There’s even a version of Ruts classic West One (Shine One Me) if you fancy a bop. 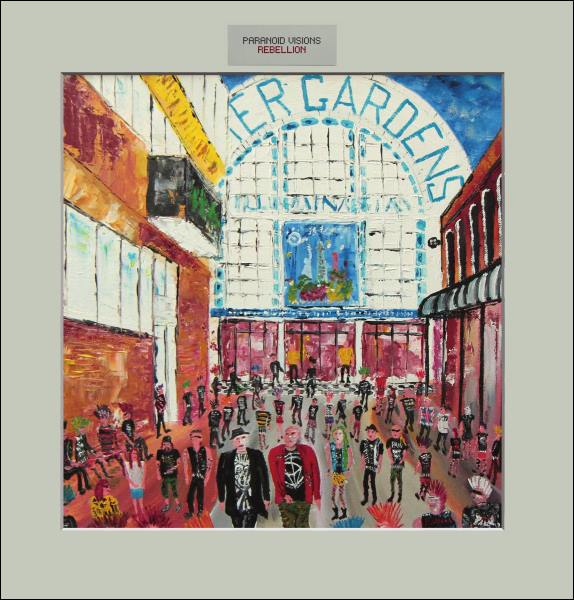 Many years ago, the Visions released (and subsequently re-recorded) Strange Girl which was a song about a young girl who died in a field in Co Longford, ashamed and lonely giving birth to a child she could not bear tell anyone about. It was a sickening reflection of a time where the church’s power held sway in this land, a time when the Angelus bells would ring, and as kids we would have to stop whatever we were doing and stay silent for the 1 minute twice every day at 12pm and 6pm. The bells rang out and decrepit Ireland ran quiet, quiet in magdalene laundries, or institutions run by people abusing children, or from certain pulpits as abusers got moved for their misdemenaours. “Angelus Bells” is a haunting reminder of that time.

It seems that one release a year isn’t out of their ability. The well crafted and beautifully packaged record ends with the one song that maybe isn’t required. Statement is a dancey remix that isn’t quite there – leave this stuff to the Cravats – but this record, which is a tribute to the Rebellion Festival at which Dublin punks lead the way, most certainly is.

In true punk rock style, even though in name and front cover this is a tribute to rebellion, its very existence is the only tribute needed and there’s no sugar coating involved.