The Greeks have been mining a rich seam of absurdist comedy in recent years and it’s not hard to read films like Dogtooth (2009) and The Lobster (2015) in terms of the political and economic crisis that has engulfed the country over the last decade. Sometimes irrationality is the only rational response to a situation that is as tragic as it is ludicrous. However, Athina Rachel Tsangari’s Chevalier concerns itself with a different kind of crisis: the much-discussed crisis of masculinity. What does it mean to be a man in an age when established gender roles, and even gender categories, are breaking down? Is it possible to assert one’s masculinity without inadvertently allying oneself with those odious and preposterous men’s rights activists? Or to put it more bluntly: what the hell are men actually supposed to do with themselves now?

Chevalier opens with a establishing shot of waves lapping onto a stony beach. Gradually, dark wet-suited figures emerge from the water carrying spears; most of them with large fish in tow which they wearily club to death before collapsing in exhaustion by the water’s edge. It seems like we might be looking at the aftermath of some catastrophic event or at least some sort of sinister Iron John-style nautical survivalism but it quickly becomes apparent that this is not so. The men are on a luxury boat trip and have just concluded their morning’s diving and fishing. Back on deck, while struggling out of their wetsuits, they verbally spar with each other about the size of the fish that they either caught or narrowly missed catching. They are a motley crew: ranging in age from the retired Doctor who has chartered the boat and is the nominal leader, to the young and hapless Dimitris who still lives with his mother and is deemed to be not strong enough to accompany the others on their physically demanding diving outings. The men spend the rest of the day either exchanging subtle and not so subtle insults, or else sequestered away in their cabins doing press-ups and seeing how far they can suck their stomachs in.

So far it seems like any common or garden middle-aged stag outing but things take a turn for the bizarre when, after an evening of power cuts forces more verbal communication than normal, they decide to spend the remaining few days of their trip engaged in a competition to establish who is the best. Not the best at anything in particular but, as they put it, the best in general. This is to be established firstly by means of a series of mental and physical challenges (each man devising one challenge) and secondly by a form of peer assessment where they continually grade each other in terms of general comportment and behaviour. It’s a neat setup that simply makes explicit the innate competitiveness that is often implicit in these sorts of male social interactions. As things progress, and the competition becomes more and more heated, the challenges become increasingly ludicrous. In one of them, it must be decided who has the largest erection, and this involves one of them reading erotic fiction from his Kindle out loud to the others in order to get the blood flowing. In another, the men compete to see who can assemble an IKEA CD-rack in the shortest time, surely the most apt metaphor for the trials and tribulations of contemporary manhood that one can imagine. 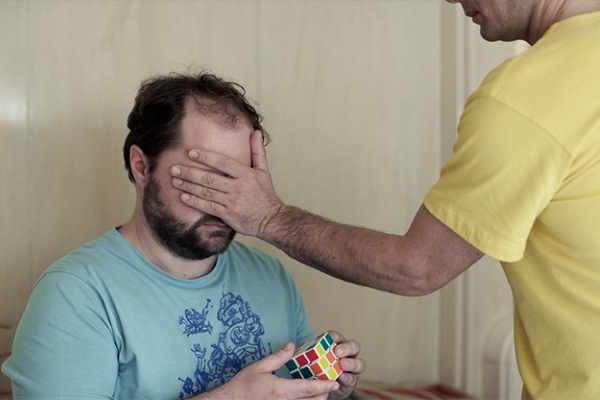 All of this absurdity is of course portrayed in an absolutely deadpan fashion. Tsangari’s style as a filmmaker is to eschew style altogether: never once are we asked to admire a beautifully composed shot or an exquisitely rendered colour palette. This is filmmaking that is designed to get out of the way as quickly as possible and allow us to seamlessly enter the claustrophobic world of these six men on a boat. This insularity is accentuated by the fact that the only other people who appear in the film are two crew members. Their job is to wait on the men hand and foot, wryly observe proceedings, and place wagers with each other as to who the eventual victor will be. Women only appear in Chevalier by proxy: either as voices on the end of telephone lines or pixelated on a computer screen when one of the men indulges in a Skype-sex session with his partner back on land.

Tsangari does a fine job of poking fun at the foibles of middle-aged manhood. The film is often hilarious but the humour is constantly undercut by a feeling of unease and by a lurking violence that is always threatening to come to the surface. When violence does make its presence felt it does so in a surprising way and while there is a somewhat bloody denouement it is not the one that we might be expecting. This subversion of our expectations is to Tsangari’s credit and her portrayal of men interacting with each other, while not pulling any punches about how awful such interactions can often be, is ultimately a sympathetic one. The men who emerge best from the proceedings are those that demonstrate some measure of kindness and empathy toward each other. Maybe there’s hope for us after all.