Jogging have “grown the beard, both literally and figuratively” for their second LP Take Courage, says MacDara.

Minutes, the 2010 debut from the Dublin post-hardcore trio Jogging, wasn’t exactly original – the spectre of Dischord looms large over its 10 tracks – but it was something spikier, more angular from a scene that’s unashamedly embraced pop over the past few years. There are clearly echoes of Fugazi, Bluetip, Faraquet and Q And Not U in those intricately picked mathy guitar lines, that thump-thump-thump small room drum sound, that bass tone like plucking a taut rubber band. And the material was great live, too. Lovely stuff, really scratches that itch.

Of course bold statements of that ilk are always a hard act to follow. Do you go for more of the same, or risk changing things up and alienating your earlier champions in the process? Jogging opted for the latter, yet thankfully on this one it seems they’ve grown the beard, both literally and figuratively.

Take Courage, their ‘difficult second album’ and first for Limerick label Out On A Limb, eschews some of their previous spikiness, which has the effect of playing up their melodic aspects, probably an influence from two years sharing the odd bill with bands that express poppier sensibilities. So they might not be as mathy anymore, but they’re definitely louder – thanks to a very American production job by former These Arms Are Snakes drummer Chris Common, who gives the songs a rich, spacious environment where each instrument has all the room it needs. You wouldn’t think to hear it that it’s recorded in a converted office block in Temple Bar. At the same time, what Jogging have given up in awkward angularity they’ve made up for in volume and forcefulness, essentially doing what Adebisi Shank have been trying, only with better results.

Opener ‘Deadweight‘ could be a remixed outtake from the Minutes sessions, and shows that Jogging have retained much of what’s particularly Jogging about them. Still there is that picked guitar and fuzzy elastic bass, and that gritty, half-sung half-shouted call-and-response between Darren Craig (guitar) and Ronan Jackson (bass), though drummer Peter Lee holds down a more conventional beat, rarely breaking 4/4 across the 40-minute running time, instead colouring with fills and rolls and minor touches.

‘Stand Still‘ is anything but, its restlessness underlined by a soaring vocal line that throws the concepts of a fixed key or octave to the wayside, not to mention that hardcore breakdown at the end. ‘Horse Sense‘, ‘False Spring‘ and ‘Skeletons, Inc‘ are straight-forward heavy indie numbers, while ‘Good Gold‘ leads with a robot riff nicked from the Shank’s playbook hooked to a hopping backbeat, and closer ‘Winter In The Theatre‘ is all drama and released tension. References abound: ‘Every Bristle A Bayonet‘, the calmest track of the 10 on offer, begins with a lilting Throwing Muses vibe before twisting into a Q And Not U trip; the chiming guitar slash on ‘Damage Control‘ is another hat tip to that DC trio’s sophomore effort Different Damage. Yet it’s all done with a nod; they’re not merely aping their influences, even if those are still quite obvious, rather collaging them into something Jogging can call their own.

Standout tracks here are the aforementioned ‘Every Bristle A Bayonet’ and the inside-out minor key melody of ‘Piecemeal‘, next year’s festival anthems in waiting (if the world worked that way) yet they’d all go down a storm. Jogging took the courage to refine their approach without compromise – or at least the wrong kind of compromise – and the results deserve a listen. 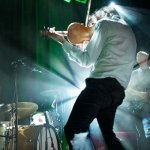 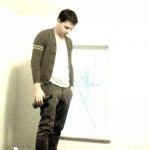