“Your appreciation of it will no doubt depend on your tolerance for repetition, but by placing it at the front of the running order, ESTEL clearly don’t give a fuck. I like that.” – MacDara on ESTEL‘s 2011 album A Massive, Glorious, Uphill, Shit-Fight.

ESTEL have always done things the hard way. Whereas their contemporaries on the Irish underground circuit were more easily aligned with prevailing movements of the day (and by definition were more marketable), the Dubliners have stubbornly ploughed their own furrow since 1999. Members have come and gone over the years – keyboardist Sarah Shiel is the only original, though drummer Andrew Bushe is almost as long-serving – but the band remains a mainstay of the scene, one that’s finally broadening its taste to appreciate those who don’t quite fit the mould.

A Massive, Glorious, Uphill, Shit-Fight (which came out almost exactly a year ago – sorry for the late review!) is their fifth album, and their first in five years, not counting 2009’s extended jam session with the legendary Mike Watt and Steve Mackay (the second volume of which is due out this year). It also presents the same four-strong line-up that produced 2006’s The Bones of Something, a record that hinted at a darker direction for the band, one much more under the influence of Goblin, the horror-prog soundtrackers of many a Dario Argento splatterfest.

That haunting record was ESTEL flipping the bird to the haters who refused to accept them on their own terms. After all, punk is whatever we make it to be, right? Five years of gigging and woodshedding since have produced a fitting follow-up, definitely with a view towards creating spaces for heads to explore rather than merely stringing together some interesting noises. And they don’t get more spacious than the epic 25-minute opener ‘Gang of Man‘, a creepy, trance-inducing monster. Your appreciation of it will no doubt depend on your tolerance for repetition, but by placing it at the front of the running order, ESTEL clearly don’t give a fuck. I like that.

The rest wear their influences on their sleeve, but wear them well. ‘Ten to Ten‘ has a warped spaghetti western vibe, like visiting the Jim Rose Circus in the Old West, while ‘The Consumption‘ goes for Melvins-style crushing doom-laden heaviness. ‘Monkey Knife Fight‘ is the perfect title for the tumbling maelstrom of noise it encapsulates. And closer ‘Head On A Stick‘, with its churning guitars, carnival keys and martial beat, conjures up some seriously deranged killer clown type shit.

It doesn’t compare to seeing and hearing this stuff live, mind you. The Night of the Living Dead samples don’t make up for the lack of Bushie’s top-notch banter. And better production would take this set to another level: the lack of resonance to the piano riffs works against the carefully crafted atmosphere, and the drumming loses its punch in spots. But as an advert for what these guys can do on stage, where they’re most at home, it’s pretty clear they’ve got a lot of shit-fighting left in ’em.

A Massive, Glorious, Uphill, Shit-Fight is out now on Little Plastic Tapes/Headwrecker. 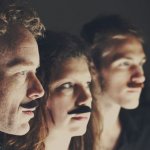 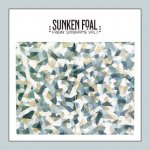