“…a blueprint that takes the rapid-fire attack of grind and applies it to abrasive take-no-prisoners free jazz. Or maybe it’s the other way round.” – MacDara Conroy faces the aural onslaught that is Dead Neanderthals.
Ever been boxed in the ears, but in a good way? That’s what Dead Neanderthals sound like.

The drums-and-sax jazz-grind duo from the Netherlands have been on the go for a couple of years now, and have already released an EP and two ‘full lengths’ (neither much longer than 10 minutes). Their output treads in the messy footsteps left by avant-garde jazz supremo John Zorn’s forays into extreme metal with his own Naked City project and his collaborations with Napalm Death’s Mick Harris in Painkiller – both of which were inspired by the quick-and-fast ethos of grindcore.

Like Zorn did in the late 1980s, Dead Neanderthals followed a blueprint that takes the rapid-fire attack of grind and applies it to abrasive take-no-prisoners free jazz. Or maybe it’s the other way round. It’s not quite clear which, but it doesn’t matter because what is clear is that their music simply pummels. And with their third album, the two-track Jazzhammer/Stormannsgalskap, ‘pummelling’ is certainly the word for it.

While their previous efforts were typified by minute-long outbursts of blastbeats and wailing saxophone, first track/side ‘Jazzhammer’ kicks into a very different gear, turning up the pressure with a repetitive, hypnotic drum attack underpinned by an onimous sax growl. A minute goes by, two minutes, but the beast keeps coming.

Mick Barr – lately of US black metal darlings Krallice – did something similar a few years ago with his own avant-grind unit Orthrelm, swapping his trademark ten-second shredding sessions for the long-form repetition of OV. But where that album/track was a near hour-long exercise in aural endurance, Dead Neanderthals have the good sense to pull their punches at the 10-minute mark. Still, that’s the equivalent of two rounds in the UFC.

And there’s not much of a breather before ‘Stormannsgalskap’ kicks in, playing on a similar beat-the-riff-into-the-ground motif but letting the ‘jazz’ part of their jazz-grind come to the fore, adding more No Wave skronk to the heavy mix. In a way, that’s Dead Neanderthals’ attempt at reconnecting grindcore with its origins: Napalm Death’s original trio said they were inspired by the scene that birthed the mighty and relentless Swans, and who am I to argue?

Jazzhammer/Stormannsgalskap is out now on Burning World Records. 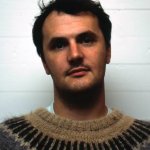 Next
Mount Eerie – Let It Dissolve Away