Chrome – Half Machine From The Sun

Chrome. That name inspires gleaming 1950s futurism – huge cars with sexy fins pulling up to the diner or the drive-in, flying saucers and giant robots on the silver screen – but the music these San Francisco industrial rock pioneers created is all New York raunch, studs and leather, the filth and grime of the Lower East Side, with an insistent industrial pulse to match the city’s racing heart.

When Damon Edge started the band in the mid-1970s, he wanted to make something entirely new from the contrasting influences of raging proto-punk and pompous prog; when he teamed up with guitarist Helios Creed in time for second album Alien Soundtracks, their alchemy was the necessary catalyst. Mixing the gritty street-trash sensibility of The Stooges with for-the-time cutting-edge electronics, Chrome were cyberpunk before there was ever such a thing.

Half Machine From The Sun collects tracks recorded in the sessions for the duo’s breakthrough records, 1979’s Half Machine Lip Moves and 1980’s Red Exposure, the latter released on Beggar’s Banquet in a climate primed (in the UK at least) for their man/machine fusion rock by the futuristic punk of Tubeway Army and Gary Numan. But Numan’s tunes are slick and robotic, his subject matter concerned with Ballardian themes of coldness and alienation, while the far more restless Chrome took their cues from the metaphysical sci-fi of Philip K Dick, whose own dystopianism is cut with the sense that the future might liberate us from human bondage.

Chrome’s songs reinforce the PKD-inspired notion of transcendence via technological or chemical means, and the audible result – distilled perfectly on this compilation, much more than a mere odds-and-sods collection – is a heady blend of punk aggression and acid-tinged psychedelia, seductive rather than confrontational like their East Coast synth-punk contemporaries Suicide (or Brits like Cabaret Voltaire). Those ‘Frankie Teardrop’ sonic terrorists might have been authentic New York scoundrels, but Edge and Creed’s idealised techno-urban romanticism makes for a more alluring experience.

There’s only so much eardrum bludgeoning one can take from Suicide’s harsh buzz, whereas Chrome’s warped sounds (best heard here in the sultry swagger of opener ‘Anything’, the swirling haze of instrumental ‘Sunset’, the neon-lit throb of ‘SALT’) open a wormhole to a sexier world of switched-on cool. Even the Cold War paranoia of tracks like ‘The Inevitable’ and ‘Fukishima (Nagasaki)’ is carried off with a care-free, sunglasses-at-night attitude, lulling the listener into more nightmarish scenarios (‘GHOST’, ‘Sound and Light’, ‘Morrison’).

More than that, though, these songs betray Chrome’s varied influences far better than the LPs these sessions produced. There’s James Chance-style no wave (‘Looking For Your Door’), psyched-out motorik (‘Autobahn Brazil’), even Roxy Music sex appeal (‘The Rain’). And their experimental streak (check out the sonic collages of ‘Housewarming Party’ and ‘Intervention’) shrouds some unabashed hooky jams like ‘Sub Machine’ and ‘Something Rhythmic’, stronger than anything on their albums proper.

It’s a happy accident that Helios Creed rediscovered these tracks some 30 years after they were recorded and subsequently lost to the vagaries of the record industry. It’s also tinged with the sadness that Damon Edge, who died of heart failure in 1995, is no longer around to see these songs unearthed. But maybe it was always meant to be, this time capsule remaining buried till the world was ready to hear it. 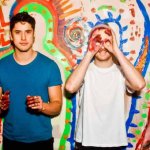 Previous
And So I Watch You From Afar – December Tour
Next
Jetplane Landing – Beat Generation… Ha!