The Warlords would also like you to know that their album – totally originally entitled "Warlords of Pez" – is out now on Trust Me I’m A Thief, and that they will be "embarrassing themselves on the Podge & Rodge show" next Tuesday, October 23rd. You have been warned.

Since their sell out album launch last Halloween, the Warlords have toured Ireland & the UK stopping off at some of the biggest summer festivals in the Universe. 3 shows at Glastonbury, Trinity Ball, the Galway Arts Festival and the Reading/Leeds Festival hosted some unforgettable shows. In September the Warlords awoke Electric Picnic with a 12 O’ Clock Mass on the Sunday morning. The Irish Times declared that the Warlords are "clearly going to hell" but they already knew this.

In October you can catch the Warlords in a town near you as they prepare for another Halloween tour. The tour finale in The Village on Halloween night promises to be a fancy dress extravaganza so start designing your costume now! 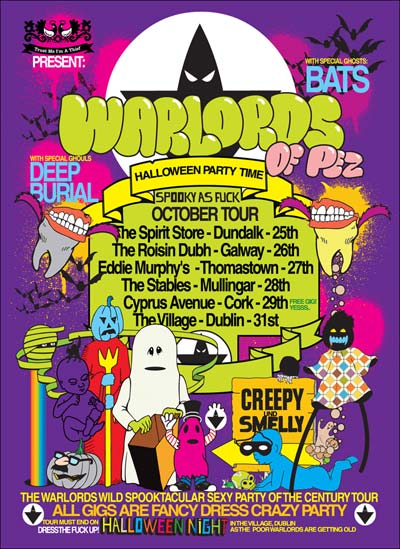 “If songs about horse vomit, snowmen made of poo and  frankfurterfrotting are your bag, then you’ll probably laugh yourself sick.  Purely puerile.” THE TICKET (THE IRISH TIMES)
“Contains a  selection of notes played on some sort of instruments, but there the  similarity to anything vaguely recognizable ends. This is the Warlords world.”  HOT PRESS
“This album is full of screwed-up hilarity…clearly  the drugs do work.” THE SUNDAY TRIBUNE
“This is the worst album  ever made. It’s also the best.” ARTROCKER MAGAZINE UK
“The Warlords are like the “You’ve Been Framed of Rock”.  Addictive, you want to turn over but you can’t.You know the baby’s going to  fall off the swing, so you have to keep watching!” ~ THE IRISH TIMES
“Surreal,  innovative, hilarious, the alternative to the dull Dublin singer-songwriter  scene.”  ~ HOT PRESS
“Stupid. Arty. Genius.  Who are these guys?” ~ PITCHFORK.COM
“Based on a  true story.” ~ WARLORDS OF PEZ  MAGAZINE
______________________________

The Warlords – supercool cybernetic constructs who eat lightning and shit magic, are the brainchild of Doctor Burglestein, deranged intergalactic genius.Their Sole Purpose: the annihilation of all intelligent beings unfortunate enough to cross their paths. These handsome hooded anti-heroes by means of their own particular brand of Sonic Terrorism intend to wipe the collective smiles from the faces of ALL MANKIND and bring about the end of civilisation as we know it.

In a lucky twist for the nation in general the Warlords will be releasing their double A-side single ("Old Women With Broadband" / "Monster Voice") on Irish Indie label Trust Me I’m A Thief in September followed by their brand stinking new album which shall be receiving its launch at Hallowe’en 2006.

Turbo Apocalypse is a consummate showman obsessed with the glitz and glammer of rock stardom, and the taste of human flesh. His onstage antics have been known to cause women to swoon, and continents to spontaneously erupt into a sea of molten lava, causing the deaths of millions. Especially the women, who are too busy swooning to plan any kind of effective escape strategy. His raw sexual magnetism is offset by the fact that he has no willy.

Deepspace Donkeybite is widely regarded as the biggest cunt in the universe. He insists on piloting the Pez rocket even though he’s only on his second provisional licence, and has a habit of flying it into stars, causing them to go supernova.The sound of his singing voice can send people into spastic fits, and is so loud it doesn’t need to be amplified. The only reason he holds a microphone is to have something to do with his hands so he doesn’t constantly fondle his enormous balls.

Evil genius Doctor Burglestein was banished eons ago to the inhospitable planet Pez for war crimes, crimes against humanity, alienity and robotity. And partly because of his unholy odour. The stinky madman set about creating an army of sinister genetic super-mutants to wreak his revenge on the universe. His brain sits in a jar in his laboratory on Planet Pez, his thoughs beamed to his body via wireless broadband. Occasionally the connection goes down, turning him into a gibbering, twitching lunatic. No one ever seems to notice the difference.

Deklekon Doombringer, a monster of such unimaginable evil even the other Warlords are a bit scared of him. His face is so nightmarishly deformed his mask had to be nailed to his face. Strange gasses and liquids emanate from every orifice of his body, and he has a lot of them. He can play the guitar just like he’s ringing a bell, and he can ring a bell just like he’s making a sandwich. His sandwiches consist mostly of spiders. His thirst for blood and L. casei immunitas knows no bounds. Whatever you do, do not lend him money.

Monumental pervert Disco Bloodbox is constantly letting his voracious sexual appetite get in the way of his guitar playing and Warlording.

Recently Doctor Burglestein decided to change his gender by bombarding him with seX-Rays. He was constantly fucking Max Megadoom anyway, so it was decided he might as well use this opportunity to breed a new generation of Warlords. But the sex change went horribly, horribly wrong!

When Turbo Apocalypse first emerged from his birthing chamber, his willy got caught in the door and was cleanly severed. Not one to let any part of his creations go to waste, no matter how small, Doctor Burglestein took the tiny member and used it to clone an entirely new Warlord. Enter Kidmeat, quite literarly a little prick.
Puberty has recently set in, causing all manner of peculiar growths and stinky miasma.

Next
Hooray For Humans – Signature Out Friday