The Run Ons, Stoat & The Objectorz will play this year’s thumped Christmas Party, in aid of the Our Eoin Fund

thumped.com Christmas Party 2017
In aid of the Our Eoin Fund

The Run Ons
Stoat
the objectorZ

About the Our Eoin Fund:

Eoin was diagnosed with MLD (Metachromatic Leukodystrophy) in October 2016. Prior to this Eoin was a very active little boy who loved running, climbing and playing. Following this devastating diagnosis Eoin’s condition has deteriorated rapidly and Eoin relies on a wheelchair and requires full assistance for all his needs. This life limiting condition unfortunately is incurable and Eoin will need us more and more as time passes.

It has been the hardest and most soul destroying news for all of us and we know that as MLD progresses it will rob our son of his speech, sight and hearing.

Eoin’s dad Gary Sloan has been involved in the Irish underground music scene north and south of the border for a long time, playing in a comprehensive list of bands along the way – including the objectorZ, who you can see at this very gig.

If you can’t make it along on the night but would still like to contribute, head over to https://www.gofundme.com/eoinfund.

I swore I’d never organise another gig – Christmas or otherwise – and, true to my word, I haven’t. Big thanks to Chris from The Middle Ages for organising all of this, to the bands for playing, and to Luke from Drop Dead Twice for the venue.

The Run Ons
Formed as a tribute to record collections (remember them? like a Spotify playlist but harder to carry) stocked with Big Star, Dinosaur Jr, Pavement too many Matador and Sub Pop albums to list and anything recorded by Mitch Easter. The Run On’s passionately believe that big chords through big muff’s into big amps make things better.

Stoat
“I was in 3rd year in school, playing bass in a band that I wanted to play guitar in. Someone told me that a guy called Cormac in 2nd year played bass. First time I met him, he had glorious black eye from a schoolyard fight. Turned out he played orchestral double bass – not exactly what I was looking for, but he was enthusiastic so he was in. That was 1986. We’ve been playing music together ever since. It would be around twelve years before we met Stephen, our drummer, who joined the band I think in 1998 direction. So the three of us have been doing the rounds now for the bones of twenty years.”

the objectorZ
“Cheap Trick or AC/DC crossed with Pegboy/Naked Raygun? Somewhere between hard rock (& roll) stuff and punk rock flittering around the heavier end of power pop. Some twin guitar action occasionally (you know they like a bit of Status Quo and Thin Lizzy) but staying under the 3 minute punk mark.” Thanks for the description from Spoonful of Tar. This is as accurate description as you could want.” 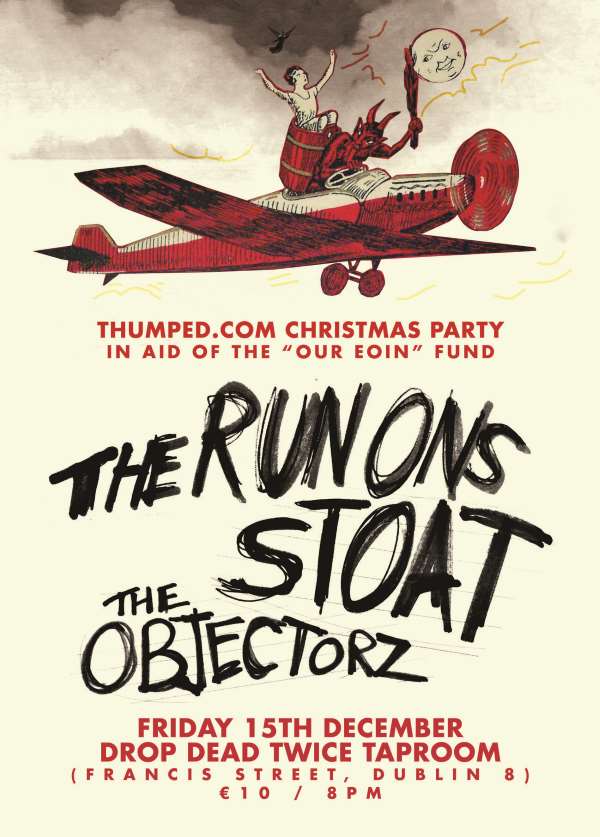 Next
Sect – No Cure For Death