Celebrate St Patrick’s Day with a Cork weekender in the company of Stanley Brinks & The Wave Pictures, Katie Kim & No Spill Blood.

This year, for that annual ‘drink-n-puke’ fest known as St. Patrick’s weekend, Plugd Records and Lisa Lemur have teamed up together to offer something a little different for folks wishing to escape the chants and roars of the outside streets…
Sayn’t Pah Tricks Week’nd features three days of folk, pop, apocalyptic noise-rock, vinyl DJs, eggs, beer and more, all taking place in the TDC and Gulpd Café in the Triskel Arts Centre, Cork. Handmade tickets at just €15 for the whole weekend, available from Plugd Records (first floor of the Triskel).
FRIDAY MARCH 14th, TDC room, 9pm:
STANLEY BRINKS & THE WAVE PICTURES
JOHNOFSILENCE (from O Emperor)
FRESCHARD (from France)
We start the busy few days on Friday 14th March, welcoming the legendary Stanley Brinks & The Wave Pictures, all the way from The Union of Kingdoms across the pond.  Stanley Brinks is best known as one of the founding brothers of French folk act Herman Düne. Since leaving Herman Düne in December 2006 he has been championed by the likes of Jeffrey Lewis; has recorded more than 100 albums; collaborated with the New York Antifolk scene on several occasions; recorded and toured with traditional Norwegian musicians and played a lot with The Wave Pictures. The Wave Pictures have been playing their brand of old-school rock-and-roll for more than a decade now, including slots at Primavera Sound and Green Man. The Guardian has described their work as “charming, witty pop songs shot through with Jonathan Richman’s gawky glee and Suede’s doomed provincial romanticism…” The two acts recently recorded a single Orange Juice for Fika Records, which will be featuring on the cover CD of the next UNCUT. Support comes from French singer-songwriter Freschard, and JohnofSilence, marking the first outing of O Emperor’s Richie Walsh’s new solo project.
SATURDAY MARCH 15th, TDC room (*NOTE: EARLY SHOW. 8pm doors; to be finished by 10:30pm):
KATIE KIM
THE MORNING VEILS
Saturday night, 15th March, sees things delve into darker, hazier territories as Katie Kim makes her long-awaited return to Cork, nearly two years after her sell-out show in the Half Moon Theatre. Katie Kim is the pseudonym of Katie Sullivan when she performs and records her slowcore, ethereal, ambient folk/pop. De-tuned guitars and sparse piano playing, walls of loops and echoing vocals come to the fore along with grisly tones and haunting and experimental flavours for sounds. All of which are executed with subtle simplicity. Paired with a voice that reviewers and fans alike have tried unsuccessfully to pin down to a niche or genre, Katie Kim’s style is entirely of her own making. Katie’s album Cover and Flood has been soundtracking the Gulpd Café evenings almost non-stop since we held an official listening party for its release in 2012, so everyone here is very much psyched at having her play in the TDC. Support on the night is from the enigmatic and rockin’ Morning Veils, fresh from their support slot to Julia Holter in Whelan’s before Christmas.
SUNDAY MARCH 16th, TDC room, 9pm:
NO SPILL BLOOD
+ Guests
On Sunday, all are welcome to Gulpd’s Sunday alter-ego ‘Egg Café’ to take a wee break from the festivites. Eggs, Bloody Marys and freshly spun vinyl from 12 – 4. The weekend will then come to a devastating sonic climax with the arrival of those synth-heavy noise merchants No Spill Blood. Ireland’s vitalic rock scene has once again created musical alchemy in the form of No Spill Blood. The band – formed from the much-loved, respected and established bands Adebisi Shank, Hands Up Who Wants To Die?, Elk and Magic Pockets – released their debut EP Street Meat internationally through Sargent House last year. Matt Hedigan (Hands Up Who Wants To Die?, Elk) on bass and vocals, Ruadhan O’Meara (Magic Pockets) on synths and Lar Kaye (Adebisi Shank) on drums took time out of their other bands to jam in Dublin in early 2011 after Matt had moved to the city from Cork. The trio’s shared musical influences, the agile post-rock electronic punch of Trans Am, the playful noise of Devo and the low-down post-punk of the Melvins can be heard melded into No Spill Blood’s spirited hurtling rhythms. While their other musical projects contribute to the tempos, the tones and the textures of the music, No Spill Blood’s sound is unequivocally their own. Repetitive Kraut-esque rhythms are goaded by O’Meara’s buzzsaw vintage synthesizers, Kaye swaps his robotic guitar work in Adebisi Shank for incisively-charged drums and Hedigan provides the fuzzed-out low-end and beastly vocals. Or in their own words – “Heft, Heft, Synth, Heft, Heft.”

Tickets go on sale from Plugd Records from this Tuesday 25th February, where €15 will get you a hand-made ticket for all three shows. If you don’t have a weekend ticket you’ll still have the option to pay at the door for each gig (€5 for Stanley Brinks / €10 for Katie Kim / €7 for No Spill Blood), but bear in mind that weekend ticket holders will be given first preference for entry. You have been warned. 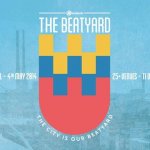 Next
The Beatyard Festival: April 24th – May 4th