Naked On The Vague, 14th October

Australian post-no-wavers Naked On The Vague play Upstairs at Whelans this Thursday courtesy of the ever wonderful Skinny Wolves.

Australian post-no-wavers Naked On The Vague play Upstairs at Whelans this Thursday courtesy of the ever wonderful Skinny Wolves. Also playing on the night are Children Under Hoof & Logikparty.

Naked On The Vague, from Sydney, Australia, fell into existence with a found organ, broken bass guitar, borrowed drum and some old poetry.

Lucy Cliché executes distorted keyboard melodies, while Matthew P Hopkins plays psyched out bass guitar. Diving deep into a world of apocalyptic pop and psychedelic weirdness, their disparate vocals grip onto stabbing keys and menacing hook-laden basslines, pushed on by an unrelentling drum machine far past the end of its warranty period. For their new ‘Heaps Of Nothing’ album on Siltbreeze, Naked on the Vague eschew their tantalisingly sparse duo attack for a quartet line-up, and the results are as sensational as they are sinister.

While the rickety, no-wave splat found on previous efforts had its appeal, the heft of a “proper” rhythm section has only helped Naked on the Vague delve deeper into the landscape of post-punk murk. ‘Heaps of Nothing’ is a 21st century codification of the gallows wit and mesmerising otherworldliness of (‘Dub Housing’ era) Pere Ubu, Primitive Calculators and Lemon Kittens. Shuttling mutant urbanity from past to present, Naked on the Vague is only too eager to confirm that the Earth isn’t flat. Because ‘Heaps of Nothing’ is here to flatten it.

“The Blood Pressure Sessions is a gorgeous, disconcerting event that grows deeper and more addicting with each listen” –Skyscraper magazine

“Sydney based duo with keys, female vocals, bass and drumbox. Unlike some groups with a line-up like this, they stay away from beats and focus on No Wave (or perhaps, ‘little band’ harshness. Very stark in a black and white kind of way, and really quite hep” –The Wire (UK) 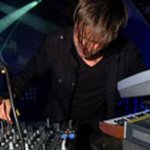 Next
Chris Singleton – Live On The Internet