We’ve just gotten some tickets for Trentemøller and Underworld to give away, courtesy of our pals at POD.

We’ve just gotten some tickets for Trentemøller and Underworld to give away, courtesy of our pals at POD.

‘Into The Great Wide Yonder’, Trentemøller‘s second artist album. The follow up of ‘The Last Resort’ offers as much depth and soul as it’s predecessor, yet sounds ultimately fresh and different. Above all, the ten tracks show an artist that’s willing to take risks, find inspiration in new places and move beyond the sound of his previous album. Trentemøller: ‘Of course I didn’t want to make the same record twice. That would have been boring.’ Instead he just started to collect new ideas, without thinking too much about the direction the music would take him: ‘The only thing I knew was that I’d want the music to be more organic, warm and not typical electronic sounding’. Compared to the intimate electronic mood pieces of ‘The Last Resort’, the ten tracks on the new album indeed have a glorious indie rock sound, with a lot of dynamics, distorted driving twang-guitars and haunting synths alongside four beautiful melodic vocal songs. 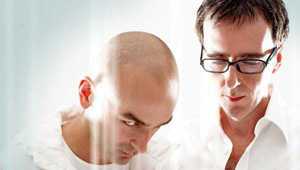 Dance music pioneers Underworld have announced a very special show this November at RDS Simmonscourt, Dublin. Renowned for their incredible live shows, Underworld are back on tour in support of their forthcoming LP “Barking”, out this month, and featuring co-productions by Paul Van Dyke, D. Ramires, and Mark Knight amongst others. The group have been through many changes in personnel – and style – since their formation in 1986. Throughout their career they have changed the shape of dance music- with a lush fusion of Techno, House, Drum ‘N’ Bass and early electro.

Next
Naked On The Vague, 14th October