Glen E Friedman is in town this week for the opening of an exhibition of his work in the Lighthouse Cinema.

Glen E Friedman is in town this week for the opening of an exhibition of his work in the Lighthouse Cinema.

CandyCollective & PhotoIreland is proud to present for the first time in Ireland an exhibition of works from Glen E Friedman’s touring collection “Fuck You All”. Never been seen here, there will be 40 pieces on show at the prestigious Light House cinema in Smithfield Dublin on July 8th 2010 and running for the month of July. Glen will also be attending the opening of this exhibit and will give an in-depth Q&A on his work and processes.

To accompany this special event there will be a very special screening of seminal American band Fugazi’s – Instrument, [Cert 15a] which was directed by Jem Cohen which Glen has close links with through his last publication “Keep Your Eyes Open”

Tickets for this screening are available from the Light House website or call direct http://www.lighthousecinema.ie / 01 879 7601

About Glen E Friedman
Glen E. Friedman is the most significant photographer of his generation. His images of the early Dogtown skateboarders in the late 1970s along with the burgeoning hip-hop and punk rock scenes of the 80s and 90s have made him one of the most important photographers today. With the uncanny ability to capture images of people whose subculture was about to change the world, his subjects range from Jay Adams and Tony Alva to Run DMC, Public Enemy and the Beastie Boys to Minor Threat and Black Flag, among many others. Over the years, Friedman has been able to define the moments of the movements that defined an era. This has cemented his place in history as an uncompromising, extremely gifted artist. Friedman’s touring exhibition Fuck You All premiered in 1997 at the Institute of Contemporary Art in London, England. Since then it has been exhibited overseas in Sydney, Australia, Harajuku and Shibuya, in Tokyo Japan, Florence, Milan, Sicily, and Rome in Italy, Berlin, Germany, Stockholm, Sweden, Antwerp, Belgium, and most recently as one of the headliners at Photomonth in Krakow, Poland, and now in Dublin.

Stateside, shows have been in Chicago, Washington D.C., Philadelphia, and Los Angeles. Friedman has had books of his work published including Fuck You Heroes, Fuck You Too, The Idealist, Dogtown – The Legend of Z-Boys (with mentor C.R. Stecyk III – it was inspiration to the award winning documentary film Dogtown and Z-Boys that Friedman co-produced); all of which are in multiple editions and pressings. And most recently with the books Recognize and Keep Your Eyes Open. 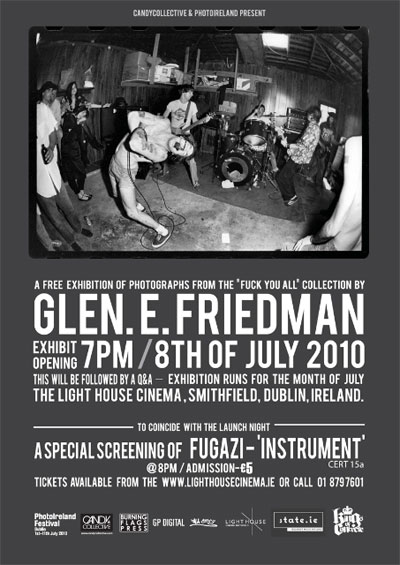