New Dublin label Fallow Records will launch their first two cassette & digital releases, from Be Honest & JG/BC, with a gig in The Joinery on February 28th.

Be Honest & JG/BC will be joined by experimental woodwind master Sean Mac Erlaine for the gig.

I would like to introduce you to the first two releases on Fallow Records, a new label for adventurous music from Dublin, Ireland. Both are released on cassette and digital formats on the 28th of February, 2013. The cassettes are limited to editions of 50 each.
Be Honest – Tea, Sugar, Soda, Soap (FRT001)
Be Honest is a solo project by Ian Maleney exploring extended guitar techniques, improvisation, field recordings and generative sound. Tea, Sugar, Soda, Soap is the first release under the Be Honest name and it is inspired by the sounds and atmosphere of rural Irish bogland. The album is based on field recordings collected over the course of a year from the Brosna river basin in Offaly in the Irish midlands. These recordings were then overlaid with a series of improvised guitar playing, experimental instrument triggering and generative synth patches designed to short-circuit preconceived compositional ideas and habitual performance techniques. The album takes the form of two side-long tracks, each moving slowly through sounds of distance, echo, life and decay, influenced by the work of people like Richard Skelton and Liz Harris. The title comes from the list of things Maleney’s grandfather would walk the four miles to the shop to get during the strict rationing of World War Two. The necessities. The album is deeply rooted in that particular place and the life there which sliding always into some unknown future.
JG/BC – Samekh (FRT002)
JG/BC is the duo of Jamie Grimes and Brian Coniffe. Samekh is a six-track exploration of improvised guitar, processing and field-recordings. With each track captured in a single take, the immediacy and unhindered spirit of the music is clear. Patient, dynamic and powerful, the pieces run from the uplifting and immersive opener ‘The Vision Of The Machinery Of The Universe’ through the bleak soundscape of ‘Black Dwarf’ and on to the peaks of the epic 13-minute centerpiece, ‘Sorath’. With influences ranging from the charged spiritual electronics of Coil through to the wintry gravitas of early black metal, Grimes and Conniffe neatly side-step any new age hoohah and draw deep on a more primordial spirit, freeing the mind and helping it to focus on what is truly necessary. A cosmic journey that melds earthly spirit and celestial body. 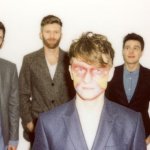 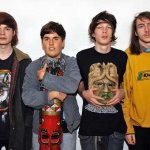