Cymbals – Ignore It And Just Swim

‘It’s tough because so many things conspire against getting music out, and making as much of it as possible – money, jobs, the world, the inexorable onward march of time’ – Siobhán Kane talks with Dan Simons & Jack Cleverly of Cymbals who play The Workman’s Club on February 28th.

Cymbals‘ first record was called Unlearn (2011), and in many ways their approach to music is about shattering received wisdoms in order to begin again. While there was a filtering of bands like Talking Heads in their early work, their later influences have taken in disco to house, and indie-pop to rock, present in their EP Sideways Sometimes, and perhaps best encapsulated in their nine-minute sprawling song “Like an Animal“, which is raw, jangly, and interesting, and which provided a kind of basis for their new work, the soon-to-be-released 12” “The Natural World”. Produced by Dreamtrak (Oli Horton), and released once more by Tough Love records, it is richly melodic, full of life and ideas, as so much of Cymbals work is. Dan Simons and Jack Cleverly talk to Siobhán Kane.

From the first imaginings of the band, do you think that there has been quite a distinctive evolution over the last couple of years?
J: Definitely. Two of us had been in bands before, and Sean, who used to play drums, then bass, basically taught us how to be ingénues again and made us forget all the bad skills we thought we had learned, and showed up all the fake stuff we had acquired for what it was. Pretty much all our recordings we made during that period, on Unlearn and Sideways Sometimes, are live and super-minimal. It was a crucial process, which taught us what was essential.

I was thinking about this in relation from you swelling to a four-piece from a three-piece, did you feel that you needed an even more expansive sound?
J: I think we just got more ambitious with what we were doing. We just incorporated digital drums samples into the live set too, so we’re getting closer to what we’ve been wanting to do since the start, but also further away from the really strict thing we had. In a sense we’re relaxing into it though.

Expansive is a word that I would use in relation to your music- and the fact then that artists like Talking Heads and Kate Bush are influences is unsurprising – because they contain a generosity within their work that continues to give in surprising ways – what is it that you love about them?
J: Talking Heads are just always unpredictable and off-centre. And I love what David Byrne says about the nicer a voice is, the harder it is to believe what it has to say.

D: I reckon Kate Bush is good enough to get over the obstacle of a really nice voice. She takes these huge risks with layers and instrumentation, which we weren’t really able to do in the past, but are starting to experiment with a little. Both Talking Heads and Kate Bush have amazing ways of putting their music to dance and movement, which we’ve recently started getting interested in.

Did covering Pavement’s “Kennel District” for the compilation on Tough Love provide something of a turning point? Was it a constructive project for the band – that you found your own voice through covering someone else’s work, perhaps?
J: It was really the first thing we did as a band I guess, the first thing that got noticed by anyone. In many ways we’re still at that point, figuring stuff out, but it also seems like a world away. We definitely found what we wanted to do as a band when jamming that song. It’s extremely carefully that we’ve brought back Dan’s violin since then.

In terms of Tough Love, they seem anything but – they are quite community-minded, and battle on for the bands they support. How did your relationship with them come about?
J: It’s tough because so many things conspire against getting music out, and making as much of it as possible – money, jobs, the world, the inexorable onward march of time. You just love it so you keep doing it, but it’s tough. Stephen [Pietrzykowski, label owner is super strong in that respect. He’s someone who genuinely loves music and who’s making new things happen. He has been an incredible encourager of the band. He’s also part of the creative process really, visually and musically. We have grand ideas about doing something good, and you really have to not care about the wider music scene or world and just do what you want to do creatively. It’s weird because London’s really strangely tough for bands – the hype wave is a much stronger force than the bands themselves, who are kind of at its capricious mercy. You basically have to ignore it and just swim.

Would you see London as a muse? I believe you used to live in Bristol, which perhaps influenced your work in other bands, do you think then that the same could be said of London?
J: There’s certainly a Cymbals family around east London, and so it wasn’t weird for Luke and Neil to join as they had been coming to see us since the first show, so they were a key part of that family. We jam our songs to friends, see what they think, play house parties, do small gigs in the area, record on our phones and play to those friends who all have an input and are part of what we are.

With Unlearn, you brought together many people with diverse ideas and ways of helping, like Rory Bratwell – was that really the purpose? So that they would all challenge you into different ways of thinking, rather producing a more cohesive, straightforward sound?
J: It’s weird, because I was cycling past the studio we recorded with Rory with the very first time, and it’s been demolished, it’s a pile of bricks now. It brought back loads of memories – we were so nervous that day. For a lot of that time while there was this weird hype around us when we first started we had no idea what was happening, it felt so unplanned, and I think all of us, Stephen included, were a bit taken aback. We were pretty intimidated too, and constantly felt like we were so uncool. I think we’ve relaxed now and we’re a bit more confident, but initially, because we weren’t teenagers and had to work a job to pay our rents we felt like pretenders, and there was this whole scene that we felt like we didn’t really fit into. It sounds silly now.

I like the way you reproduce a lot of dance rhythms with guitars, leaning towards funk in places, is there anyone in particular that inspired you on in this regard? And also how far has dance music, particularly House – influenced you? I think that dance music – though I know it is too broad a heading – is going through an exciting evolution at present.
J: We’ve got really into funk influences recently, The Gap Band, Change, Mtume – the new record has been pretty inspired by all that stuff. At the start we were desperate to counter the tendency songwriters have to dramatise their problems. It was like being desperate to have music in our lives as something really fun, so house parties and friends were a big part of that. I think we’ve got over the initial nervousness about actually talking about things we’re interested in recently.

I had written off “Like an Animal” early on as I thought it was way too serious, and I thought people might not be able to dance to it, but I actually think starting to work with Dreamtrak took us to the next level and allowed us to be comfortable as songwriters and also make dance music.

How did you come to work with Dreamtrak?
J: We heard some of the songs he’d worked, particularly his remixes for Beat Connection, CocknBull Kid and others, and we loved the sound he got, and we wanted to work with him. We’re currently working on an album with him, we have around 16 songs recorded, and close to ready and we’re just choosing the best ones.

It’s a completely different process to anything we’ve done before. We recorded at Lightship 95 with Ben Phillips, where we made Sideways Sometimes. The difference is that that was pretty much a live record with minimal production – although Ben Phillips is a genius to have sorted it out and made it listenable! This time we recorded the live stuff at the Lightship, and then we have spent a lot of time in the studio with Oli working on production. Oli is amazing to work with as he is a synth and drum machine genius, but he’s also a musician, so he has a lot of great stuff to say about the songs, and he has been helping us write the songs as well. Our new single, “The Natural World”, along with “Like an Animal”, is a good indicator of what’s coming.

How far is space important to you? For example, as you said, Sideways Sometimes was recorded on the Lightship 95.
J: It was a really surreal week, and it happened at quite an exciting time for the band. But it was also a bit of a fraught process, we were learning how to write and there was a bit of pressure – mostly imagined in our minds. Going back there to record the new songs brought back memories. It’s definitely an important space for us.

We’ve also had the same practice space – a shoe box basically – at Netil House in Hackney for over two years. Now that is a place I will never forget.

The screenprinting by Sinead Evans is beautiful – and it makes sense with your sound. Do you think that you will collaborate with her again in the future? It is very comforting to see this much work go into artwork – something that is constantly getting eroded with the online world – it’s really lovely.
J: As I think we’ve said before, for us, the artwork is as important as the music. We’d certainly love to work with Sinead again. We’ve started working pretty closely with Robin Hulme, who is a liberty print designer and has a slightly different approach to us. So far he’s designed for 4AD, Vuitton, Liberty and us, so he doesn’t do loads of record sleeve artwork. We like that he has a unique eye. I think that’s what we loved about Sinead’s work too, it was different. I still have one of those screenprints on my wall.

What plans do you have for 2013?
J: We’re mainly working on making an incredible record, and we’ve also introduced some interesting stuff to our live set – handclaps etc! So we’re pretty excited about getting out there and playing it to people.

Cymbals play The Workman’s Club on February 28th – Win tickets here – and The Roisin Dubh in Galway on March 1st. 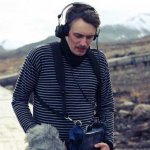 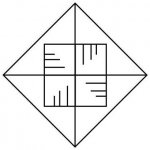