Larry will be reading extracts from his book How To Ru(i)n A Record Label in the Loft at The Grand Social, before a Q&A session hosted by Niall McGuirk of Dublin’s Hope Promotions. Afterwards they’ll both be playing some records in the beer garden.

How To Ru(i)n A Record Label
In 1987, Larry Livermore began documenting the burgeoning DIY East Bay punk rock scene with his newly founded label, Lookout Records. During the ten years he ran Lookout, first from his solar-powered cabin in the Northern Californian wilderness, then from a scruffy studio in the backstreets of Berkeley, it would grow from a shoestring operation into a multi-million dollar business responsible for introducing the world to the likes of Green Day, Operation Ivy, and a host of other artists.

The label’s meteoric rise to prominence was followed by a similarly spectacular fall from grace. In 1997, disillusioned by the pressures and conflicts that had accompanied Lookout’s success, Livermore abruptly walked away, handing control of the company to a 24-year-old junior partner. Within a few years, Lookout was bankrupt and ceased to exist.

In his book How To Ru(i)n A Record Label (Don Giovanni, 2015), Livermore describes what happened and tries to make sense of why. His story has resonance not just for fans of the music Lookout specialized in, but for anyone who ever dreamed of sharing their music or art with the public — or simply anyone who ever had a dream. “At my core,” Livermore writes, “I’d never stopped being that Detroit kid with a chip on his shoulder, out to show the world that ordinary people from ordinary places could, given half a chance, do extraordinary things.”

Since the book’s publication, Livermore has been speaking to audiences across North America and Europe, recounting his journey from gun-toting teenage hoodlum to Woodstock-attending hippie to California punk pioneer to watching his protégés being inducted into the Rock and Roll Hall of Fame. Though his tale spans multiple generations and subcultures, it ultimately centers on what he describes as “the heart of what it is to be human: the never-ending need to re-imagine, re-invent, and, above all, transcend ourselves.”

Niall asked Larry a couple of questions in advance of Sunday’s Q&A session:

Why a book and why now?
Well it’s been at least ten years in the making. It took that long before my emotions had cooled sufficiently for me to write in a level-headed manner about what was, after all, one of the more dramatic events of my life. Also, for reasons I can’t fully explain, I felt compelled to write another book first (Spy Rock Memories), detailing my attempts to leave civilisation and the music scene behind and move to the wilderness, only to find the wilderness more conducive to my punk rock dreams than the wilderness ever had been. And though it wasn’t necessarily my intention, Spy Rock Memories wound up describing a number of the events that led up to Lookout Records, and nicely set the stage for the current book, which will be the middle one of a trilogy (the third, now in progress, will deal with my years in England).

Why Ireland and why now?
As for why Ireland, well, Paul, who I met in 1994 when I was accompanying the band Huggy Bear on a tour he was booking, asked me! Under normal circumstances it would have been prohibitively expensive to come to Ireland for only a reading or two, but since I was going to be over in the UK anyway for a mate’s wedding, it worked out nicely. And now I’m doing a similar one-off in Rome the following week.

Any music on the go these days?
I’m not doing a lot with music myself right now, apart from plinking away at my acoustic guitar from time to time when the spirit moves me. Most of my time and energy are going into writing and travel, and as of late, dealing with impending homelessness. My building in New York has been sold and will be knocked down for luxury flats in September, meaning I’ve got to find somewhere for myself and/or my possessions to go. I may well put everything I own into storage and simply travel the world for a year or two.

u:mack Present
How To Ru(i)n A Record Label
A book reading and Q & A With Larry Livermore, founder of Lookout Records
Hosted by Niall McGuirk (Hope Promotions)
3pm, Sunday June 19th
The Loft @ The Grand Social 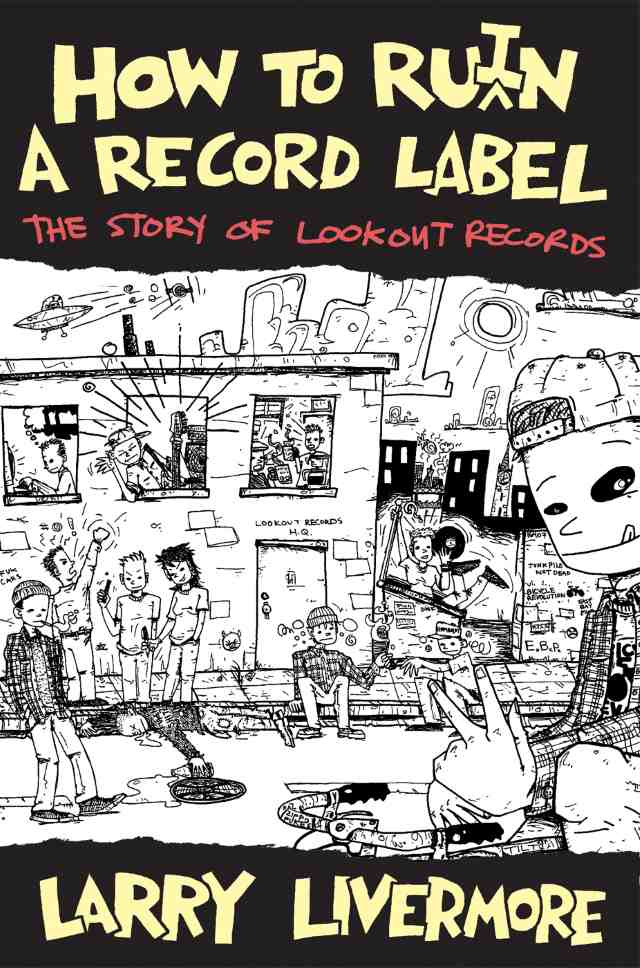 Previous
Arborist – A Man Of My Age