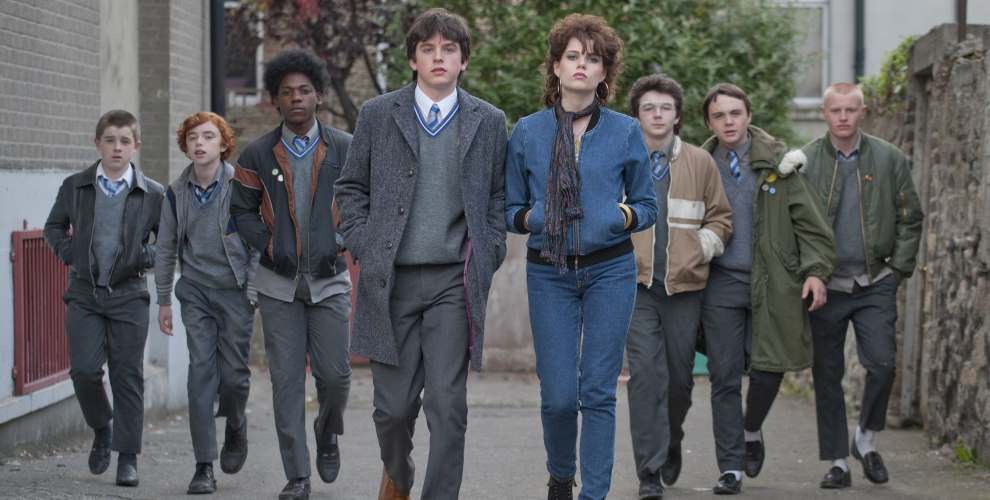 ‘In places charming, elsewhere frustrating, Sing Street will please many a viewer of a certain age’ says CJ McCanney

On viewing the recent German spy series, Deutschland 83, I remarked to friends on the seemingly inexhaustible source of inspiration the 1980s provide. Indeed, the ‘80s revival by my reckoning has lasted far longer than the actual ‘80s did. Sing Street is another addition to the recent crop of tv shows and movies that draw settings, soundtracks and other styling from that era.

Set in the environs of Dublin’s Synge St CBS in 1985, the film centres on the tribulations of 15 year old Conor (Ferdia Walsh-Peelo) as he tries to win the girl and win at life via the redemptive power of contemporary pop/rock. If you’re looking for a forensically detailed, gritty period piece then you’ll be disappointed. While the film pays lip service to the straitened times commencing with Conor being unceremoniously ripped from his private secondary school and dumped in the school of hard knocks, it’s played more as musical fantasia.

Several of writer and director, John Carney’s previous films (2007’s micro budget hit Once and 2013’s well received Begin Again) focus on the creative process behind writing songs. Sing Street is no different, using many of the signature songs of the era as well as an array of original songs written for the film, to chart Conor and his pals’ progress. When the band finally hit their stride As regards the original compositions in the film, to this reviewer’s mind, the better the band got at playing the worse their songs got. A few of the originals here are fun and catchily reflective of the sounds of the time but several of the latter numbers stray into wallpaper balladry.

Walsh-Peelo leads an ensemble of youthful newcomers and relative unknowns and this group’s chemistry is one of the strengths of this film. Reeling from being bullied by teacher and fellow pupils alike, Conor starts a band in an impromptu ruse to impress a mysterious and beautiful girl, Raphina (Lucy Boynton) with the help of wheeler dealer Darren (Mark Carolan). Conor and Darren proceed to recruit band members from the ranks of the school misfits with Percy Chamburuka, Conor Hamilton and Karl Rice playing their parts with charm. Particular mention should be made here of Mark McKenna who gives an authentic and heart warming performance as Conor’s slightly odd but loyal and talented wingman, Eamon.

The young central cast are given solid support by stalwarts such as Don Wycherley, playing a stock stern Christian Brother, and Aidan Gillen and Maria Doyle-Kennedy as Conor’s troubled parents. Sadly, the weakest casting link is Jack Reynor playing Conor’s ne’erdowell but sage older brother, Brendan who shepherds Conor through the best sounds of the time. Reynor previously made a name for himself with a fantastic lead performance in 2012’s acclaimed What Richard Did but here puts in an overwrought turn that, given the character’s pivotal role, threatens to sink the whole enterprise.

There is much to like about this film. The aforementioned group dynamics, the authentic schoolyard banter and the plethora of gags, especially surrounding the band’s attempts at music videos are extremely endearing. The way Conor discovers new music through his older brother also rings true and is a pleasant reminder of the days before the Spotify celestial jukebox. At its best Sing Street taps the same vein of teenage bittersweetness that made Freaks And Geeks such a compelling show (indeed Walsh-Peelo bears a passing resemblance to that show’s John Francis Daley). It will be interesting to see how Sing Street is received by a younger audience perhaps less familiar with the various hits that pepper the soundtrack and with no memory of the era depicted.

The film also has its fair share of weaknesses. The character of Raphina is left largely undeveloped, with brief mentions of past traumas substituting for real character development. There’s also the painfully predictable hat tips to Back To The Future and wacky fashions that highlight the limitations of nostalgia exercises such as this. Furthermore, the dissolution of Conor’s family as depicted does not possess the emotional heft intended. The overall story, as charming as it is in places, is also fairly flimsy and predictable. We never doubt Conor will wind up with Raphina, nor that the bully will be brought on side.

In places charming, elsewhere frustrating, Sing Street will please many a viewer of a certain age with long since excised delusions of rock grandeur. Early reviews suggest it will be a hit but Sing Street left this reviewer wanting something with more bite and more substance.