“The tone of the film – the empty, emotionally detached, high and mighty preaching – all of this is the film. It’s hard wired into every scene and for the first hour at least, the film cannot escape the weight of its own overblown tone. And what’s more…it’s fucking boring.”

How do you know when someone is a vegan?

The same can be said of anti-capitalists. Then, maybe they really are the same thing. Maybe they really do sit around together bad mouthing the machine while exchanging recipes for vegan burritos and finding new ways to make shoes out of old packets of ketchup. Perhaps they sit around making a fixie bike into a generator to power an iphone long enough to send a message which reads “d time is now bgin d revolt bothers vent your h8tred for capitalism 😉 xxx” to the global network of anti capitalists. In that moment all the irony of using an iphone to signal the beginning of the end of capitalism will be moot as the people smash through the walls of banks and houses of parliament the world over, bringing it all to its knees. Sure they tried carrier pigeon but the ones with the PETA leanings thought it was inhumane to force a bird to fly, and so the iphone brought about the end.

Well that’s the great thing about being ‘anti’ anything. You don’t really have to have one unifying belief except that the other guy is wrong. Is it barter that we get next? Is it a vague form of communism? Is it a de-evolution back to survival of the literal fittest rather than the fiscally fittest? Who knows? I get the impression that the ones shouting loudest at the rallies know even less than I do. Masking ignorance with volume and bravado has always worked for me so I admire their adherence to the simplest Darwinist idea: look scary and big, live to fight another day. Let’s leave the thinking to the weak-armed, limp-wristed types, the ones listening to Joanna Newsome – that’s where the real policies come from.

Cosmopolis is a film version of a novella by Don De Lillo. It stars yer man from twilight and it’s directed by David Cronenberg. Cronenberg has had a resurgence of late, A History Of Violence and Eastern Promises were fairly straight ahead thrillers (by his standard anyway) and got him back into the box office good books while providing some grim ultra-violence set pieces to alert the snuff porn generation to his existence. A Dangerous Method is, in a way, more his usual territory – psycho analysis, mad doctors running amok, a mentally damaged heroine and some excellent scenery chewing by its mega acting cast. Cosmopolis should, on paper, be the return to what Cronenberg is famed for – weirdness. Cold, austere, unsettling weirdness. Dead Ringers weirdness, Crash and Videodrome weirdness. That kind of weirdness. So is it weird?

Well yes, but it’s not weird enough. In fact the biggest surprise and the weirdest thing about Cosmopolis is that it’s actually a bit boring. Cronenberg is doing his best to create an unsettling ominous tone in which its main protagonist can watch his finances and, by extension, his life fall apart while having chats about capitalism to increasingly soulless nut-cases each adding to his despair as he mentally deteriorates . All of this happens as he tries to make his way across an unhinged, dangerous NYC on his way to get a haircut. Reading that back I’m actually starting to think that it sounds kind of great and it should be, but unfortunately it isn’t. Cronenberg manages to gift a fine character to Robert Pattinson who, to be fair, does a fine job as the smarmy egotistical uber creepy narcissist. He reminds me quite favourably of a young Christopher Walken. And though he’s become a poster boy for a certain sort of teenage girls’ first foray into panty fumbling, he’s just plain weird looking. Sorry ladies, he is. His skin and hair give him the look of a man kept in a basement for his entire life. It is as though he never sleeps. He’s got weird teeth and the kind of eyes that are just plain creepy. If anything, he should be the poster child for hepatitis.

Anyway, in this sense, it all works. He looks smarmy and creepy and he plays smarmy and creepy. Unfortunately though, he’s doing his best with a script which is essentially a series of black comic lessons about the failings of capitalism. The film’s first ten minutes pass by so excruciatingly that I was looking for the exit, or the twist – the David Lynch style moment where you realise you have been duped. ‘Yes real people don’t talk this way, I know this but I’m just fucking with you’ says Cronenberg and we breathe a sigh of relief and move on to firmer footing through our dystopian near future with an edgy feeling. But this firmer footing never arrives. The odd stage play setting in the back of a futuristic limo, the clunky dialogue which seems to be a kind of mad ‘Shakespeare of capitalism’, remains constant. The tone of the film – the empty emotionally detached, high and mighty preaching – all of this is the film. It’s hard wired into every scene and for the first hour at least, the film cannot escape the weight of its own overblown tone. And what’s more…it’s fucking boring. Everything visually noteworthy and threatening happens outside the limo. It’s like being at a drive in movie with a frigid scientist who insists on telling you why a real alien most likely wouldn’t want to harm you.

Probably the weirdest thing that does happen is that somewhere towards the final act of the film, Pattinson seems to grow more into his role, my brain became more accustomed to the wordiness, the other worldly delivery of every single line and the absoluteness of the black satire. I found myself engaged for the first time. For all its flaws (and there are many), when the film finally began to push the right buttons and when Pattinson is allowed to actually play a human instead of a soulless caricature (he’s in every single second of this and seemingly only plays a human being for about 10% of his screen time) it began to work. Well, work is slightly too strong a word. As a film in the most basic sense, as a piece of entertainment or as a story or even a character study, this is poor. However, as pure satire, as a series of vignettes, of attacks on culture. Like a series over intellectualised moments from a sketch show or long winded punch cartoons. Some – though admittedly very few – begin to hit the target. Most potently the detachment between the mega rich and the reality of pain and death and inability to have control over these and the equal detachment between anti-capitalists’ actions and their ability to affect genuine change, is evident in this film and brought a wry smile to my lips. There are occasional moments of genuine brilliance here but on the whole you’d have a better time by sneaking a raging far left anarchist vegan into an economics lecture in a McDonalds.

As I left the cinema and walked towards Dame Street, there were a congregation of people waiting for the lights to change. As they looked up at the facade of a building on the opposite side of the road they resembled an audience at an art exhibition. They all tilted their heads upwards to look at the same object. They did so absentmindedly, waited for the lights to change while looking across the street both distracted and at the same time engaged. When I looked up to see what it was they were looking at, I saw that a building’s facade on the opposite side of the road had been turned into a billboard. It featured a black and white image of a man’s torso. The torso was buff and hairless – its pectoral muscles bulged and its six pack looked engorged. The acceptable extension of the erection. The torsoman pulled the front of his jeans as low as possible without revealing the member – the connecting point of the shaft to the body. There was not a pubic hair in sight as the jeans fell below the hips revealing the angular bones, the arms and the bones pointing downwards like an arrow towards the penis and scrotum testicles which remain enigmatic, hidden in the barely present denim.

I looked back at the assembled crowd. A young woman blushed when she saw that she had been caught looking. The lights changed, we crossed the road and the billboard was instantly forgotten by the mass of onlookers. I walked towards the building and it’s facade and billboard. The man had no head, no eyes or jaws or mouth, no identity. Like so many female models in similar states of undress, groomed and fake, mere extensions of the vagina (and by further reasoning, mere extensions of the capitalist penis, like corporate headquarters, shimmering skyscrapers of glass and steel that stretch up like endless erections and cars that are curved like women or have we been fooled, advertised into submission, to find women with curves more attractive because they’re shaped like cars.) who appear on news-stands TV adverts and billboards. I looked up to identify the billboard – Abercrombie and Fitch. A clothing company I gather…oh the irony.

I looked up one last time and smirked at the relationship between the film I had just seen and the billboard above my head. It had become what it had always been – two dimensional and invisible now, because of my proximity to it. A vapid, irrelevant, tedious entity made vulgar and spectacular by its monstrous proportions. Equally fetishised and made shameful by our humanity and need to engender our own personality, our experience on even the most simple of concepts. Capitalism = bad, Love = good, Sex = good or bad, depending on your outlook on whether you are in the ‘have’ or ‘have not’ category. All of these things could be said of Cosmopolis because all of these things can be said of capitalism. Capitalism is not the problem, our human egos and failings, our greed, our disdain for the well being of others, our ignorance and impotence are the problem. Cosmopolis’ inability to fully humanise capitalism in order to have it torn to shreds is its primary failing and, like a billboard of a body with no head, it’s hard to care about. 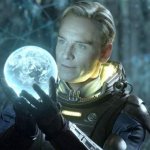