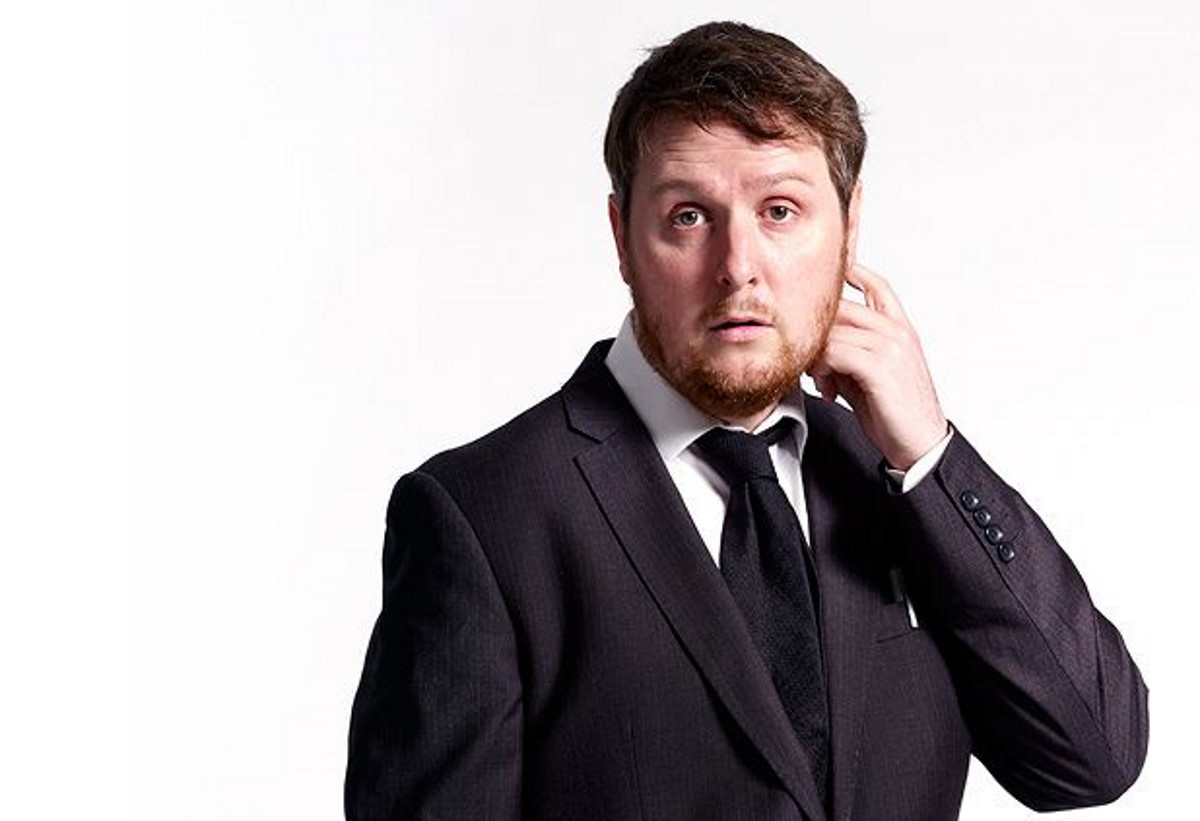 Tim Key is one of those people that gladdens the heart; his creativity and inventiveness at turns delighting and inspiring. Since starting out in the Cambridge Footlights production Far Too Happy in 2001 (which was nominated for a Perrier Award) he has gone on return to the Edinburgh Fringe (and beyond) triumphantly time after time, whether through his one man play Luke & Stella or the four man sketch show Cowards. His collaborative projects are always interesting, whether working regularly with fellow comics Tom Basden, Alex Horne and Mark Watson, or with Armando Ianucci and most recently Steve Coogan on Mid Morning Matters (the new online series of Alan Partridge), he is constantly working; from writing books to recording an album and making short films.

His love of language is evident from all of his work, but no greater evident perhaps than his 2009 show The Slutcracker, (which won the Edinburgh Comedy Award). The Slutcracker holds words up as the most sacred thing of all, and takes stand up comedy into the realm of a dreamy kind of theatre, perhaps working from a similar ethos of the great Daniel Kitson. It is wonderfully shambolic, but in an elegantly choreographed way, and the whole piece is punctuated with interesting musical choices and short films, but at its root, it is about poetry – the real love of Key’s life. This love is something that has been well documented, many people have perhaps seen him on Charlie Brooker’s Newswipe and Screenwipe as resident poet, where observations on the state of modern living routinely become a radiant kind of poetry – living, breathing and working, for example, poem 1020: “Phil and Dean just got married”./”I didn’t even know they were gay”./”You must have known Phil was gay”./ “Well, possibly. But I really didn’t know Dean was gay”.

Ahead of his Dublin shows, and the ‘Last Ever Slutcracker’ in London in early April, Siobhán Kane talks to the inimitable Tim Key.

The Slutcracker is something of great beauty as well as comedy, how long did it actually take for you to write?– and since you wrote it some time ago, have you found that is changed over the months, and that you are continually editing or adding to it?
Thank you. It’s quite an organic process. There’s some poems in there that I wrote a while back and some that were new and glistening when I did my first preview. Then there followed six months of previews and scrawling in pubs and moments of inspiration and moments of horseshit that fed into the first Edinburgh show. After that there was tinkering. It is almost finished.

Poetry is such a touchstone of your work, I know that words are mainly the currency of comedy, but your grasp on language is so interesting, when did you become interested in poetry?
I went on a lads holiday to ibiza when I was about 20. We weren’t lad-y enough. I remember sitting by the pool writing some ideal poems with my mates. We got lashed too, but we definitely had a poetry element. That resurfaced about ten years later when I started scrawling in a notepad.

How did working with Charlie Brooker come about? Your residency is always one of my favourite things about the programme. Charlie seems to relish language so much too.
Charlie’s a very intelligent beast. I was very lucky to get that job. A producer happened to see me do ten minutes underneath a pub and booked me. Simple as that. Makes going underneath a pub with poems seem very worthwhile.

The short films in the piece seem to pay homage to Monty Python, would they be huge influences on you? And is there a certain aspect of their work that you hold dearly? Their physicality comes to mind as something you might enjoy.
I love Monty Python but those poetry films are nothing to do with me. My friend Jason is a mercurially talented director and called all the shots on those. God know what his influences are. I think he’s probably watched too much European cinema. I love the way they look though. In terms of physicality. I tend to find I’m either standing still or climbing onto a fridge.

How has your relationship with performance evolved over the years? I am always amazed when quite shy people perform.
I am not shy. I am deeply confident. I think most comedians are. We just tend to be cripplingly shy in front of journalists so they like us more and write that in real life we are heroically polite and unassuming guys.

What was being part of the Footlights show Far Too Happy ten years ago like? Do you think it was very formative, did you learn a lot? What had your experience of comedy been like before that?
It was lifechanging. I suddenly found myself in a room full of frighteningly talented people. We quickly realized we had the same tastes and wanted to make something roughly the same, so we were lucky. It was a fun environment to write and we learnt a lot from one another I think. Before that I just had a vague notion that I liked comedy. It’s not the sort of thing your pointed towards by careers advisors. It’s a surreal sensation, when you find yourself, over a period of years, gradually turning into a comedian. Very weird.

You have worked in so many forms; radio, television, theatre – is there any way you can describe the differences in experience for you, do you prefer one to another? Or does it all flow into the same kind of strangely electric experience?
Live performance is the most nervewracking. You are vulnerable. You produce a load of old horseshit and people will be furious. In all the other forms there’s another layer. People don’t listen to something on the radio, decide they don’t like it, track you down and yell in your face. But you still have an enormous fear that you’ll produce something that isn’t good. I think that’s important. You stop caring and you’re dead. It’s just with live work that last sentence might get uncomfortably literal.

Who are some of the writers that you have held most dear over the years?
Nikolai Gogol. Dan Rhodes. Bukowski. Dahl. Carver and Steinbeck.

Has John Hegley [brilliant performance poet, comic and writer] been an inspiration to you? Like you, he relishes language and takes his relationship to it to so many odd and wondrous places.
I love John Hegley. And for those reasons. Also, in one of his shows he had a swing. I liked that. His work is constantly brilliant.

You have worked with Alex Horne a lot, how did you two meet and did you instantly know that you were going to have an interesting creative relationship?
I auditioned for a pantomime. It was total crap. He wrote it. A while later I met him again and became friends with him. He was a very funny stand-up. Now he’s pushed on – he’s a fearless comedian. Very affable. And very original. Our creative relationship extends to gossiping over coffee and occasionally hatching a ridiculous plan. The most recent one was making me his son’s godfather. Nuts.

You have done quite a bit of writing with Tom Basden as well, are you working on anything together at the moment? It must be wonderful to have met such like-minded people that you can work on such diverse projects with, and it just seems to grow and grow – what other projects are you working on?
Me and Basden are always tinkering. We’re lucky to have each other I guess. He’s writing a radio show which I’ll be in. Then I’ll have to put him in mine. We still do Freeze – our double act thing, from time to time and last week we got drunk together and had some problems. I’m lucky to find these guys but, once I’ve found them, I really dig my talons in.

Your work with Steve Coogan in autumn of last year also comes to mind, was that an enjoyable experience?It must have been quite surreal, because he is so ingrained in cultural consciousness. He also elevates the written word, and I wonder sometimes if he will write a novel one day, do you think that you might?
I might write a novel one day. Don’t think I’m quite clever enough yet. Working with Coogan was obviously nuts. He’s a big hero of mine and sitting next to him/his monstrous creation was a surreal experience. Again, lucky.

I read that you love Paddy Considine, he has a real warm intelligence about what he does. He has previously talked about the raw quality to his childhood, but that storytelling got him through, and fed his own desire to connect and learn – what about your own experience?
Totally different. My childhood wasn’t a struggle. My Mum and Dad are both funny though. As me and my brother got older I remember those times round the dinner table were always funny. My Dad would be stupid and my Mum would tell him not to be, and then it would all kick off. I guess the way they’ve helped is just by being constantly supportive – even when it was very unclear what they were supporting. As time went by they stopped using phrases like “Law Conversion” so much and now I’m on the radio sometimes or they see me make people laugh in a theatre and they’re delighted. That’s one of my greatest pleasures, seeing them in the gloom, chuckling away. I love that.