Sorry, but I have a vision of stormtroopers goosestepping with their brollies up as they sing Rain Drops Keep Falling On My Head. Probably directed by Mel Brooks. 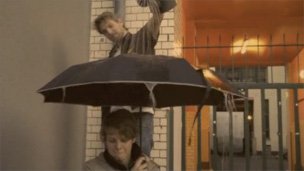 Gene Kelly is not the only one singing in the rain - German hardware hackers have come up with an umbrella that makes music when it is wet.

Berlin-based Alice Zappe and Julia Lager fitted 12 touch-sensitive sensors to the inner canopy of a brolly.

The sensors were connected to a simple circuit board that spotted when each sensor was struck by a raindrop.

It plays a different beep for each sensor to generate a random 8-bit tune in response to the falling rain.

The gadget was put together in a day for a 24-hour hardware hacking event in Amsterdam so had to be relatively simple, said Ms Zappe.

She said the idea for the umbrella came out of a visit to a design exhibition the day before that left the pair wondering how everyday objects could be connected by music.

Many of their ideas, such as a making a web app that recommended food based on the bands someone likes, proved too complicated, so the pair plumped for the musical umbrella. 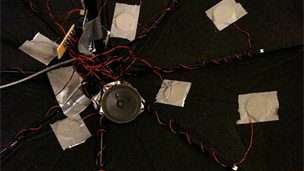 The first version of the umbrella has the sensors and wires fixed to the canopy cloth using duct tape.

The sensors are made of a piezoelectric material that generates a tiny charge when it is stressed or distorted.

The charges generated when the piezoelectric sensors were hit by raindrops were picked up by an Arduino microcontroller. This has a simple silicon chip on a circuit board studded with many different connectors that can take in data, analyse it and then produce a response via one of its many outputs.

Arduino microcontrollers are popular with many hobbyist hardware hackers because they make it easy to get different components working together.

One tricky part of the project, said Ms Zappe, was tuning the microcontroller so it generated enough beeps to make a pleasant tune. Too sensitive and listeners would get a frenetic cacophony in the lightest shower. Not sensitive enough and the music would be too plodding and sporadic to be interesting.

It does get a bit annoying after some time”

Alice Zappe
Testing the sensitivity of the sensors was tricky, said Ms Zappe, because no rain fell on the day it was being built. A bit of messy experimentation in a kitchen did not really help, she said, so the pair had to go on a foraging trip for a watering can.

"We went out to the city on a quest that cost us hours of precious hackathon time," she told the BBC. "It was ridiculous."

The delay meant there was no time to work on connecting the Arduino to an Android phone because writing software to do that task would have taken too long. As a result, said Ms Zappe, they were forced to fall back on the built-in 8-bit tone generator on the Arduino microcontroller as a musical source.

"We wanted to present something simple that actually works rather than something complicated we wouldn't be able to finish in the given time," she said.

"In the end we were quite satisfied with our prototype although we have to admit it does get a bit annoying after some time," said Ms Zappe.

The pair are now working on an improved version of the umbrella. This will have wires and sensors sewn on to the canopy and be able to play more pleasant sounds.

"It will also allow you to choose from a few different sounds like piano, guitar, drums and bells - and of course 8-bit," she said.
Click to expand...