A great way of getting over an album. I was just thinking of how absurd it would be to try and do that to Purple Rain; the Purple Rain tour was 98 shows long, including a support act playing all-Prince written songs, and every show would be recorded. Nevermind the hours of unreleased tracks. It's a 9 track album ffs

Lili Marlene said:
A great way of getting over an album. I was just thinking of how absurd it would be to try and do that to Purple Rain; the Purple Rain tour was 98 shows long, including a support act playing all-Prince written songs, and every show would be recorded. Nevermind the hours of unreleased tracks. It's a 9 track album ffs
Click to expand...

I like watching the unboxing videos on YouTube, but I haven't bought any of them tbh. The Pink Floyd early years box set is the bench mark for ridiculous boxsets. I think it was around £400 when it was first released. Too much for me. I know I wouldn't listen to half of it. I bought the 2CD cre/ation pack. Does the job.
Last edited: Aug 31, 2020

...I have four of those massive King Crimson boxes...

within reason like... i hate the box sets that have many versions of the same song - complete studio outtakes kind of thing. i have the coltrane box of all his atlantic lp's which is pretty great, although there are multiple lp's of just alternative versions and outtakes which are the ones i never listen to. there's a recent stooges raw power box set that has whatever 10 lp's of just different versions of each song. i couldn't be arsed with that, much rather pick up that new live album that came out - 1 lp. nearly 100% of the time the cut they put on the album is the one you want, and either way it's more than likely the first one you'll have heard so that's the one that sticks with you. now and then you might want to listen to another version but not 10 versions. you listen to them once and then it sits on the shelf like some awkwardly shaped trophy.

I tend to listen to a lot of mine often, I pick discs at random from some of those gargantuan sets and treat them as a single album for a week or so to get to grips with that material; otherwise it’s too much and I fatigue. Unless it’s the King Crimson Road to Red set which I listen to in full every few months.
G

Damn!!!!!! Definitely would buy an lp of this

Out of print music set free

GARYXKNIFEDX said:
Damn!!!!!! Definitely would buy an lp of this

Out of print music set free

do you have this boot LP ?
ten of these songs are on:
Demolition Killed By Hardcore 1981-83 LP
w/ Die Kreuzen, Mecht Mench, Zero Defex.

all demo material by two Wisconsin greats and Z.D. from Akron.
there was at least one more LP in the series featuring early NYHC demos.

the first DIE KREUZEN EP and LP are as good as it gets.
also Cows and Beer has my favourite art work ever.
whenever I see a T shirt of the EP it only has the front cover which is
a pity as the drawing continues around to the back sleeve...


when they recorded their s/t LP in early 1984 for Touch & Go the songs
were already all old.
I always think maybe Corey Rusk and the band wanted the songs put on
vinyl for posterity as they were already moving on from hardcore ?

anyway as the CD version of the first two LP's was one of the first HC
records i ever got, Die Kreuzen - s/t LP is my most listened record ever.

FWIW I think the first BUTTHOLE SURFERS LP was released at the same time by T&G.

discogs link for above mentioned boot:

EDIT:
the other boot in the series has THE ABUSED, S.O.A. and HONOR ROLE.
so obviously only ABUSED were from NYC...
all 3 of those bands recordings are available elsewhere
Last edited: Sep 12, 2020
G

I have both those boot lps. But would always take better quality
N

i thought you would have those records. they're still easy and cheap to get even now.

another thing that comes to mind about Die Kreuzen is that
they were very little mentioned in the 90's.
i can barely ever remember hearing them cited until the 2000's
when a wave of bands playing old school HC gave them dues.
they were in a field of their own.
G

I remember them getting talked about a lot in the late 80s. But only the later tecords seemed to be around so probably got forgotten to a certain extent because of that.

I met the drummer in the early 00's. He was ( is?) Working in Melkweg in Amdterdamn as a cook. Real good lad.
N

cool that you got to meet Keith Brammer.
the odd time I've met people from old bands on a bus or at a gig or whatever
and suddenly I realized who I was talking to.

I actually like the second LP October File (which is much more rock) but the
rest of their records I couldn't get excited about.

the same with VOID a band that sometimes get lumped in with Die Kreuzen.
their unreleased LP Potions For Bad Dreams (?) is wack.
sounds like early 80's metal crossed with Killing joke to me - but for whatever
reason I love it as well ! nowhere near as great as their other recordings though.

I just remembered Corey Rusk recorded that one too. he apparently asked
Bubba Dupree to to let him release it a number of times over the years
and he always said 'no'.

the would be a good blog subject - 80's HC / punk bands whose second LP's
lost the plot and are wildly different to what they were great at.
there was more than a few.
N

another mistake to correct:
Erik Tunison was Die Kreuzen's drummer.
Keith Brammer was the bassist.

my dodgy memory isn't as good as I'd like to think.
G 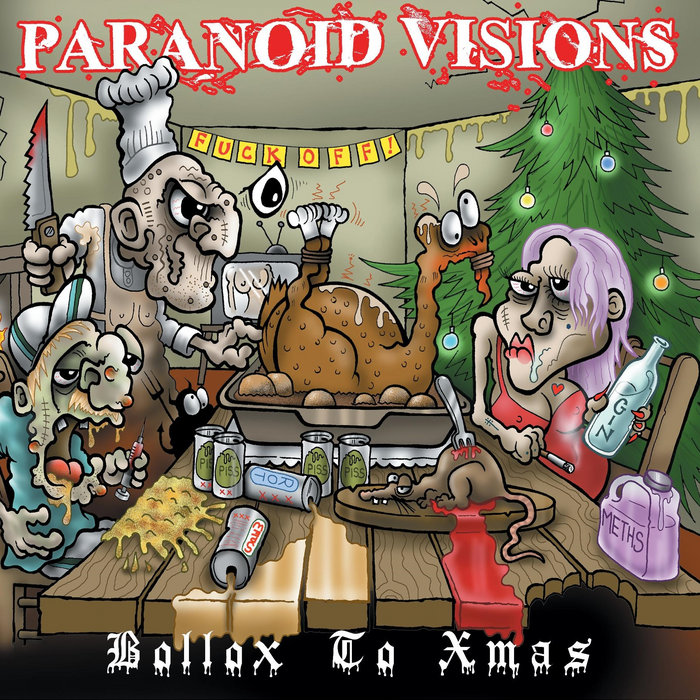 Bollox to Xmas, by paranoid visions

( a long shot,but,if anyone has the cassette version,im interested in buying)

prefuse said:
Which one did you buy?
Click to expand...

I recommend the following outtakes as a WTF was he doing not releasing these: