pete said:
the only version worth watching


it's what i'm showing the kids even though i own a few DVDs
Click to expand...

It reminds me of the time I was deep in Steve Hoffman territory and I came across a guy who was working, fairly successfully, to recreate the Sgt. Peppers recording sessions, day by day.

I can watch a gif of what's supposed to happen on one of those search results. 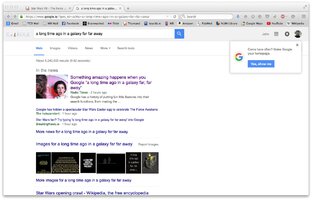 Doesn't work in FF, it does in Safari/Chrome.

Cornu Ammonis said:
I can watch a gif of what's supposed to happen on one of those search results.View attachment 11022
Click to expand...

7 - No tomorrow said:
Brainwashed?
Oh, the chortles.
Click to expand...

Nothing to do with work, music website that I used to write for. Think Thumped but stranger music and no forum full of pricks.

Cornu Ammonis said:
Nothing to do with work, music website that I used to write for. Think Thumped but stranger music and no forum full of pricks.
Click to expand...

That's why I got the chortles. I did the research.

New one for the sith

It has always been about the merch, i kinda like seeing how brands will try use it to shit their shit but that's just me.
Star Wars Marketing Tie-Ins Have Jumped the Gundark With Lucky Charms, Lipstick, and Crocs

STAR WARS: The best stamps in the galaxy at Royal Mail Shop

That interviewer is over 40?

That is fucking depressing.

I feel like I'm over this. Zero excitement. Not bothered to pre-book. I'll get to it eventually.

During today’s press conference for Star Wars: The Force Awakens, a conference in which none of the press had seen the film because it wasn’t screened for them,J.J. Abrams revealed that while other franchises can load up on stingers, once the credits roll his movie, you don’t have to worry about leaving the theater because the movie’s over. There is no mid-credits or post-credits scene.
Click to expand...

The day this comes out I have my Christmas lunch with my lab and then my departmental party. Conveniently my tickets for Star Wars are for a time in the middle of the two, allowing me to go from party to party with a Star Wars interval.

Films of the year