For Sale CDs for sale (1 Viewer)

Whittling down some CDs while putting boxes of them up into my attic.

Some Autechre albums and EPs. The one third from the bottom one is LP5, and the top one is the limited double CD version of Quaristice in stainless steel packaging. All of them except Quaristice are €5 each or €25 for the 7 regular editions. Quaristice goes for €200 on discogs so that one has a spicier price tag of €180 for thumpeders before I stick it up on discogs itself for €200. 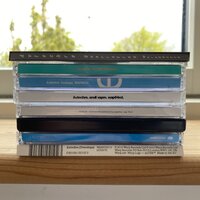 Three Suishou No Fune albums, the blue one is a double CD and the top one is a self-released limited edition. €5 each or €10 for all three. 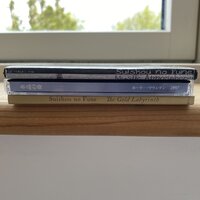 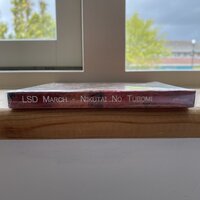 And @rettucs isn’t allowed in this thread after insulting me in @Nate Champion’s thread. More stuff to follow in the next few days.

Cornu Ammonis said:
And @rettucs isn’t allowed in this thread after insulting me in @Nate Champion’s thread. More stuff to follow in the next few days.
Click to expand...

There are some real messers on here.

Hope you get trolled by cormcolash though. Hope we can eventually cargo some heavy action early 90s Jean Claude Van Dam me VHS through such action in the classifieds forum.

Btw you tagged some guy called Nate who joined in 2001, and posted twice in said year.

"Young U.S punk soon to be new in Dublin."

Wonder what happened him?

Whoops! I did click your name in the drop down. Or so I thought. It must be @pete’s fault in some way.

He lived here a few years iirc. Not sure where he is now.

moose said:
He lived here a few years iirc. Not sure where he is now.
Click to expand...

I would have went with

GARYXKNIFEDX said:
I would have went with

more appropriate for sure.

Burgerbarbaby said:
Ach....you'll defo get €150+ for it on Discogs....
Have you entirely given up on Autechre?

I haven't entirely given up on them but I'm happy to stream them and I have the bonus disc from Quartistice on a hard drive now.

Cornu Ammonis said:
I haven't entirely given up on them but I'm happy to stream them and I have the bonus disc from Quartistice on a hard drive now.

I'm sorry...in my head I had written that post properly...I'd love to buy them all except for the Quaristice one...your price is totally fair but I couldn't justify the spend for CD2 only. I have a few of these already, but they've barely survived some formerly lax care habits and several house moves. How do I pay you? My partner is in Dublin for work a bit these days, she could possibly meet you.

moose said:
He lived here a few years iirc. Not sure where he is now.
Click to expand...

Did he end up going out to Kildare to play with those boys?

Great prices for the Autechre ones not 150 eu...they always strike me as a "get them on vinyl" band, but actually there's probably no real difference.

Anyone selling any Handel* cds?

I have a bunch of Jandek albums but I’m in two minds about selling them. I’ll let you know if I do.