“We may as well be dressed in black, standing by a pile of dirt next to a grave, about to toss a flower onto a wooden casket.” – Aoife Barry on Blues Funeral, the new Mark Lanegan Band album.
What a voice Mark Lanegan has: tough like an old boot, rough like callouses. Like each line on an elderly man’s face, there’s a story in every one of his throaty notes, a story that has depths most men like to leave unplumbed.

For a man who’s famously reticent to embrace the limelight, he has played a solid and important role in American independent rock music since the 1980s. Leader of grunge heroes Screaming Trees, player with Queens of the Stone Age and the Gutter Twins, contributor to Soulsavers, singer alongside Belle & Sebastian’s Isobel Campbell. At the helm of the Mark Lanegan Band on this album, he’s at home: on his own, but backed when needed by musicians including Josh Homme, Greg Dulli and Jack Irons.

Blues Funeral is his first release since 2004’s Bubblegum. Recorded in Hollywood, California with Alain Johannes, it opens with the stomping Gravedigger’s Song and its pulsing guitar and creepy lyrics. “I’ve been dreaming of you / and the taste of your love so sweet, honest it’s true,” he half-snarls. Only Lanegan is capable of writing a song that’s as threatening as it is romantic, with its talk of crows flying over head and shovels six feet down.

There’s a constant preoccupation with darkness on this album, which, knowing his previous work and life story, is no surprise. “I hear the winter will cut you quick,” he informs us on St Louis Elegy. “If tears were liquor, I’d have drunk myself sick.” He’s a great man for uncomfortable imagery: a house of cards, a tower of stones, a diamond-headed serpent, children losing their mind (Ode to Sad Disco). Things that are just pretending to be something else, images that make you feel a shiver of strangeness. “I lay my guns on the table,” he admits in Leviathan, before confiding in us that a hangman is following him.

Riot in My House brings us even more forceful imagery: death’s metal broom; battlelines; fearless ferocious dogs. Musically, it’s Queens of the Stone Age territory, with rasping guitar solos that remind us of Lanegan’s past. But every time he brings us close to this past, he reminds us that he is not stuck in it, such as when he combines disco beats and slide guitar in the opening to Ode to Sad Disco (which, quite literally, is a sad disco song).

When he sings of literal blackness (Grey Goes Black), it feels like familiar territory, but the drum machine is a clever touch, and demonstrates perhaps the influence of his work with Soulsavers and Gutter Twins. It’s through touches like this that Lanegan brings his music forward, while still retaining the grungey spirit that made him adored in the first place. He is able to straddle these two worlds – past and present – with ease.

Phantasmagoria Blues is the closest we get to a ‘love’ song, but it’s a twisted love we find here. “Do you hear the tolling bells that ring down from above?” Lanegan asks a woman called ‘Jane’. Their love is torn and tattered, bruised and beaten; there is talk of razorblades and crying on piers. Here, he is a corrupt, tortured ghost, roaming a seafront town with a battered heart.

It is the religious imagery that is most striking on this album. “Lord now the rain done come/muddy water rising up,” he moans on Bleeding Bloody Water, warning moments later of a “celestial flood“. Jesus appears in St Louis Elegy, before Lanegan announces: “Here I am earthly bound/ said Hallelujah I’m going down/ and the River Jordan is deep and wide“. Is this redemption he is singing of, or has he crossed over to another spiritual plane?

The religious imagery continues in Harborview Hospital , where we find more electronic beats, and talk of Sisters of Mercy, Agnes Dei, and devils ascending on crystal wings. It’s like a song created by a depressed New Order, with its talk of being down in the dirt, where “they say it doesn’t hurt“.

Funeral Blues lives up to its name – there is nary a light moment here. We may as well be dressed in black, standing by a pile of dirt next to a grave, about to toss a flower onto a wooden casket. But curiously, it’s not depressing. It’s somehow vital, energising, with its weird, frightening imagery, religious elements and wounded, mysterious characters. Like Lanegan himself, this album has its secrets. It doesn’t reveal itself to us easily, and each listen is a little revelation.

Blues Funeral is out on February 3rd on LP, CD & download. Mark Lanegan Band play The Academy on March 7th. 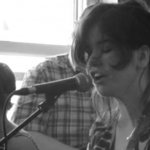