Hallock Hill – The Union / A Hem Of Evening

“Nothing feels unnecessary here, each note seemingly thought through in a severe editing process. Still, the bed of improvisation means that you’re never sure where the melodies are leading, always taking a turn and heading off somewhere unexpected.”

There are few instruments in modern music as over-wrought as the acoustic guitar, and few instruments have such towering figures standing over its contemporary development. Anyone who has spent even five minutes with the American primitive/Takoma school of guitar playing will be familiar with names like John Fahey and Robbie Basho. They have seeped, by drip or torrent, into almost everything that has happened on acoustic guitar since.

Developments have been myriad, but few have stepped so boldly into their own like Tom Lecky did with The Union last year. Originally released on CD by Hundred Acre Recordings, The Union has been given the vinyl reissue treatment by MIE and it is as beautiful an edition as you’d expect.

Lecky, a native of New York state, crafted a beautifully sparse and ethereal record, exploring a series of extended techniques, improvisation and effects on acoustic, electric and lap steel guitars. Resonant tunings abound as layers of improvised guitars float in and out of each other, overlapping, complementing, taking control and moving on. Of the nine songs on The Union, most follow a strong line of thought, variations on a theme. However, ‘Pencil Spin‘, moved Lecky into more droning territory, interrupting his golden tones with harsh bursts of noise and extended the whole thing to over ten minutes in length, examining every note in sublime detail. The album has lost none of their sparkle in the months since the original release; it’s still a beautiful, ambitious, innovative album that sounds like nothing else out there right now.

Alongside the reissue of The Union, MIE have also included a new album of Hallock Hill material, called A Hem Of Evening. This album picks up where first left off. ‘On Sundays When I Wake Up‘, the last track on The Union, was a warm, spare exercise on electric guitar with each note echoing in space, reversed sounds coming in from the sides and less frantic over-dubbing all round. It’s measured and concise qualities are seen again in ‘Psalms‘, the opening track on A Hem Of Evening. Considerably more sparse than the guitar work on The Union, the layers have been pared down, showing a refinement of sorts in Lecky’s approach. Nothing feels unnecessary here, each note seemingly thought through in a severe editing process. Still, the bed of improvisation means that you’re never sure where the melodies are leading, always taking a turn and heading off somewhere unexpected.

Side A maintains this approach throughout its four tracks, keeping it minimal and bare. Side B contains two longer pieces, clocking in at over ten minutes each. ‘The Sheets‘ and ‘Cashmere Exhange‘ hark back to The Union in their layers and more prominent use of effects, but the playing feels softer and more focused, warmer and more welcoming. The titles imply comfort and that’s how these pieces feel, a musician in control of his work, comfortable in exploring it’s possibilities.

Lecky’s great strength is finding the narrative thread in his instrumental works, linking together distinct improvisations expertly using musical and emotional touchstones. Simultaneously a planned and unplanned construction, his music now feels familiar but unique, bringing new colour to tones that are as old as the hills. 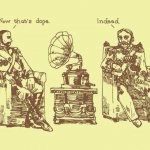 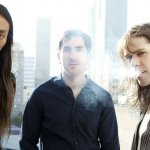