‘Listen close and listen well; you won’t be able to half-ass this.’ Ian Maleney reviews the new LP of improvised synth drone from Billy Gomberg.

You’ll need some powerful speakers to catch the opening notes of Billy Gomberg‘s False Heat. They rumble around in the depths, a hulking shadow at the very, very bottom of the spectrum, more felt than heard. It’s an immediate signal to listen close and listen well; you won’t be able to half-ass this. A couple of minutes in, a high signal breaks through, a wisp of noise high above the cavernous bass. It flits and fades and then holds its place for a long time, lapping against the void separating it from the next frequency down. We’re held in place, between the two, hovering. Things go bump in the darkness. You hear an intake of breath, the tones shift and we’re covered in a new shade of light.

One one hand, there’s not very much going on, a few tones and noises rubbing up against each other, but the effect is transformative. You follow the low feedback drones and the hollow presence of the sub. Almost metallic overtones emerge above, on the verge of feedback but never quite straying out of control. Gomberg is light of touch but never loose, threading his tones through each other carefully and intuitively. He shifts the focus gradually, quietly transforming the field as he goes.

The second side is somewhat more robust or more active. At least, it takes place a little more in the middle of the spectrum, swirling and pulsing right in front of you rather than slipping constantly from your view like the first. It’s leaner than the first too, thin and vapourish without the constant menace of the bass. At times it grows into something extraordinarily beautiful, layers of sound dappled like the sun on lake waters. Bass wells up and tones appear to rise through the layers around them, up into the ether, rain falling upwards into an infinite, cloudless sky and there it soon begins to hang, a mist of gently clashing distortions. In the end this is all dispersed and we’re left once again with the quiet presence of the bass, a warm, solid earth to lie upon.

I fell asleep under a tree in the garden while listening to False Heat the other day. It was warm and I had my headphones on so the sounds were right up in my ears, at once demanding attention and lulling me, tricking me into unconsciousness. The world slows way down when False Heat is playing and sometimes it stops altogether. I slipped in and out of a waking state, catching snippets of glorious sound and colouring my hazy half-dreams.

False Heat is released on a limited edition of 108 LPs by False Records.  http://www.falserec.com/ 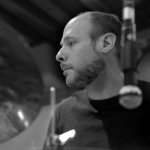