The Dudley Corporation, Jogging, The Run Ons – Upstairs at Whelan’s, 11th May

‘He knows his way around a melody the way Jimmy Savile knows his way around a sweet shop‘ – Annabel Minsk-Treacham popped into The Dudley Corporation‘s album launch last Saturday. A gimlet is a gin based drink. Gin and lime. Or lemon. It depends. When you’re offered one, you take it, and when the edges of the evening begin to soften, you’ll know who to blame. Oh, this is how we do things these days, with a cocktail before the Show. We’re very excited about the show.

There a largesse to our gait as we arrive at the venue, upstairs in Whelan’s of Wexford street, where some helpful person, possibly an Eskimo, has lit a fire, to keep the May chill out of our bones. How thoughtful! That’s the kind of attention to detail that keeps a venue like this on top of its game, many years after it stopped being relevant. Ah yes. I recall with great fondness asking Paddy Casey for “a short” at the Xmas party one year. And I remember never again being invited back. C’est la vie, dedicated listener. Reader. Whatever.

We’re there halfway through the Runaways set and my dear, if they haven’t gotten a whole lot hairier since their late seventies heyday. Girls, they’ve invented the Ladyshave since then, don’t you know? I’m just glad there’s no legs on show.

Jogging, the band rather than the sport (is jogging a sport? Competitive jogging? Is it a pastime? What the fuck is it?) are deeply influenced by Haruki Murikami’s What I Think About When I Think About Running. Hence the name. He thinks about them when he’s running which is why he’s so uptight. These guys clearly think in haiku. Shouty little haikus that they bark at the audience, as if asking for us to do you something on their behalf. Perhaps make another pitcher of Tom Collinses. “Hey! You! Make! The! Tom Collinses!” Says one guy. Then the other guy says: “Make them really STRONG!” in a higher pitch. Then they jump around a bit. It’s contagious and now I really want a Tom Collins.

“I shouldn’t have had that gimlet, I’m beginning to think” I announce to my consort Tall And Strong Dave (no, not that dreamboat, the other one), but he’s giving me the gimlet and I can feel the hem of my skirt ride up a couple of inches. Ooh eer, missus. It must be the sultry heat in the room. Thank god for the roaring fire, eh? I remember that summer in Dublin, when we had fires burning, at gigs, in May. When Liam Reilly tells us he got on the 46a and stopped off to get his guitar, did he get the bus driver to wait while he went up to his Clyde Road bedsit to wrestle it from the hands of whatever drunk, O’Donoghue’s hussy he’d picked up the night before? I’d say he did. Bus drivers used to be like that. Sorry, ma’am, but sure aren’t I after telling bagatelle I’d wait for himself to get his guitar. Perhaps it was in a pawn shop. Whatever. We shan’t see the likes of those summers again, I can tell you. It’s silver slivers of ice forever falling from the sky, that’s all. It’s scarcely cocktail weather, worse luck. I’ll have a hot whiskey, a single malt if you don’t mind bar keep. No, you fucking minstrel’s bastard, that’s a BOURBON. My god, don’t they have SCHOOL in Poland?

The main event of the night is The Dudley Corporation. Dudley Colley is from old, old money. He can make a Tom Collins with his eyes closed, and frequently has to. Little known fact is that his family invented the border collie back in 1843 and have been making money off that since. No wonder he can afford to look quite so dishevelled. He knows his way around a melody the way Jimmy Savile knows his way around a sweet shop. He’s a real Ranelagh talent in a Dundrum world. It’s a shame, Dudley should be on tv, richer than a fleet of Biebers and releasing the occasional duet with Bryan Adams. In the video they’ll be sitting around, laughing so much their baseball caps will fall off. They’ll stand next to the microphone in the vocal booth, one hand holding a can to the right ear, the other hand clenching the air, the eyes squeezed tight, like an important poo is about to happen. Oh, Dudley, I’ll dream for both of us, mmmokay?

They’re always a treat to watch, if only for the nicest man in rock, or proximitous to rock, on the drums. Joss’s feet spin quicker than a new Samsung Diamond Washing Machine, but CONSIDERABLY louder. It’s marvellous that they’re releasing another record. I remember the first one quite clearly, in that I remember being so hung over I had to phone my workplace and report a felonious indigence. Women’s problems, I said. Far too many Tom Collinses, I didn’t say. It was a stroke of luck too as I got to stay on my couch draped in Japanese silk chewing on the celery in my BM watching famous buildings come crashing to the New York sidewalks. Somehow amid the rubble and the wound licking, people suddenly forgot that The Lonely World Of The Dudley Corporation was now in the shops. I’m not suggesting that a Dudley album launch need necessarily precipitate an unspeakable act of mass murder, but it was with some trepidation that I pulled my swollen head from the toilet bowl on Sunday morning to check Sky News. “Oh, dear God,” shouted Tall and Handsome Dave (definitely not that one, people), “they’ve killed Scholsey!”

No, dear reader, me neither. 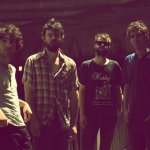 Previous
Suuns – The Grand Social, 16th May
Next
The Dudley Corporation – Grey lights