It’s a beautiful sunny evening in Barcelona, and I’m surrounded by middle-aged men in today’s second-biggest cloud of hash smoke (Lee ‘Scratch’ Perry is playing later). The balding man in front with the bad dye-job and very tight pants is recording Michael Rother of Neu!’s set with one hand while using the other to wave fingers at people, press imaginary buttons, and turn non-existent dials. The nerds are out in force, and they are very pleased. Rother sets off some glitchy samples and melodies on a keyboard and laptop, moves to guitar as Steve Shelley and Aaron Mullan kick in on drums and bass, and it instantly sounds great. The end of each krautrock workout is greeted by enthusiastic whoops, in response to which Rother smiles beatifically, appreciative with just a touch of smug. More people have chosen Rother and friends than Atlas Sound. On the Pitchfork Stage, Bradford Cox works up loops with his acoustic guitar and a few pedals, sings tunes on top, and blows his harmonica, but it doesn’t seem to be grabbing people with the same gusto. 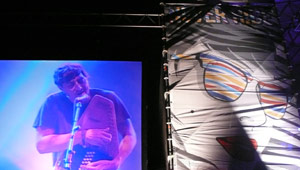 Pitchfork is one of the less branded stages at Primavera, and a few people have commented on the amount and prevalence of branding. Ray-Ban sponsored a couple of stages, and have massive banners on theirs and the Vice stage, which also has a pink neon Vice sign. Yeasayer were unimpressed on Friday night and shouted “Look at these fucking Ray Ban posters. Aren’t they the ugliest things you’ve ever seen?!” They are indeed pretty ugly, but then again this is why tickets from Primavera start at €99 and Electric Picnic is €240. At least nobody from the festival tries to enforce using brand names.

The organisers are fairly pleased with themselves this year. 35,000 people were in on Friday night for the Pixies – the largest crowd they’d ever had. An impromptu press briefing is held to announce this in the Pro area with it’s private swimming spot, sofas, and fancy restaurant. Meanwhile in the regular food area, punters are fed dreadful swill. Pizzas that taste like they’ve been microwaved several times over, peanutless saucy noodles masquerading as pad thai, and undercooked chips. The food and queueing problems mean the organisers shouldn’t be too smug yet. Nonetheless, the festival is generally safe, well organised and friendly. It probably doesn’t hurt that most attendees are old enough to want a non-camping festival and to be able to afford Barca hotel prices. The promoters can hardly do anything about the fact that several days of wild pissing have left the green areas smelling like a jungle.

Grizzly Bear grace the area between two of the big ugly banners at 10pm, and despite the lovely harmonies, great playing, and copious compliments to the crowd about “one of their favourite festivals”, few people seem to be getting that excited. For me, they were the main draw of this evening, and maybe it’s the chatter around us, but the songs I’m so fond of aren’t really bowling me over either. Then again, it’s hard to beat their gig in front of 1500 excited but entirely silent sycophants in Vicar Street earlier in the year. Very nice and all, but maybe I’d been expecting too much. 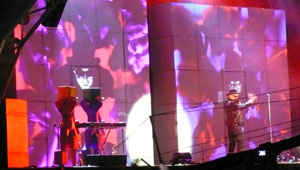 The big draw of the evening is Pet Shop Boys on the main stage, who appear with boxes for heads before Chris Lowe decamps to what looks like a small hotel bar in the right-hand corner, equipped with an imac. Up until now, my favourite aspect of Neil Tennant’s career was his writing for Smash Hits in 1982, but this is pretty great. Even the non-hits are rendered interesting by the elaborate stage show that begins with Gilbert & George-alike images of the pair of them broadcast behind Tennant, before the screens break down to boxes that are danced on, shifted about, have cityscapes broadcast onto them, and are dangled like baubles. Several non-believers are getting steadily baked while Lee ‘Scratch’ Perry croaks over a solid band playing 70s-style roots reggae. Flashy entertainment isn’t for everyone I suppose, but it doesn’t seem worth missing the Pet Shop Boys for. Our flatmate said that they made him want to become a dancer and gay. Personally I just reckoned it was tremendous skit, and it didn’t even involve queueing.

Next
Tweak 2010 Call For Submissions