rhizomes – a tour of legitimate sharing

Over the last two years, all of the artists involved in this tour have been forming rhizomatic connections resulting in collaborations, remixes, one-off events and so on. This tour brings these three acclaimed bands together for one tour with collaboration at the heart of it. With work shared in advance of the concerts, each act will present their own sets yet each performance will also feature collaborations between the artists developed for the tour.

Patrick Kelleher is a 24 year-old musician based in Dublin, Ireland, although he spent much of his childhood in the English town of Rugby. His music varies from brooding, tense electronica to jaunty acoustica to 8-bit dance-floor ditties to evocative, experimental pop but always with a twist of something ethereal or idiosyncratic. 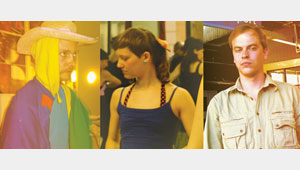 Thulebasen are a Danish ensemble operating within a parallel pop universe where they uncover lost gems of sound and successfully blend the microtonal scales of American composer Harry Partch with the popular music sensibilities of the Human League to transport the listener to an interplanetary discotheque or rather a BBC Radiophonic ‘Top of the Pops’.