Open Ear, a new experimental music festival will be held on Sherkin Island on the June Bank Holiday weekend

The inaugural Open Ear weekend will take place this June bank holiday weekend for the most part in the grounds of the beautiful Sherkin North Shore Guesthouse, with everyone repairing up the road to the Jolly Roger pub for tunes and pints on the Sunday of the festival. Inspired in equal parts by the wealth of diverse electronic music talent in Ireland and by other alternative festivals, from Unsound in Krakow, to Rathlin off the coast of Antrim, the organisers hope Open Ear will carve out a unique space in what is a crowded Irish festival landscape.

The concept behind Open Ear, as much as it can be said to have one, is simple: Invite the best experimental electronic musicians Ireland has to offer to come and perform live on a single stage, to a receptive audience, fostering a greater sense of community throughout this blossoming scene Playing live will be a motley assortment of inventive minds: Bjork collaborator Spaces will be playing solo and as part of leftfield Techno duo Ordinate. More out-there Techno will come from Cork’s Ellll, who will also be premiering her new Double Glaze project in collaboration with Mariah Black.

Sunken Foal will treat audience members to a set of his otherworldly electronica, while exciting new Dublin “digital mixtape” collective wherethetimegoes will have a special showcase featuring young artists Minos and Lastminuteman. Their desiccated beat structures and lo-fi productions are at the vanguard of a new wave of young Irish producers. Other artists on the bill include instrument maker and educator Ed Devane, making a welcome return to a rowdy techno-informed idiom, classically trained cellist turned wonky beatmaker Niamh De Barra, leftfield R’n’B chanteuse Meljoann (ahead of the release of her new LP), and Alphabet Set co-founder T-Woc, while the noise and post-punk contingents will be ably represented by Cholera House (a new project from one half of Piratical Hip-Hop mentalists Melodica Deathship) and Ger Duffy’s School Tour project, where Cabaret Voltaire collides with Eno.

While the focus is on live performance, there will also be sets from experienced selectors such as Platinum Ray, Kenny Hanlon from Apartment records (fresh from his triumphant set at BLOC) and SIAS (aka Frank B) and Lumigraph doing a rare Six Month Vacation set (Lumigraph will also be playing live.)

Open Ear tickets are €75 which includes camping; return ferry tickets to the island are available at a reduced rate of  €7 for festival attendees. 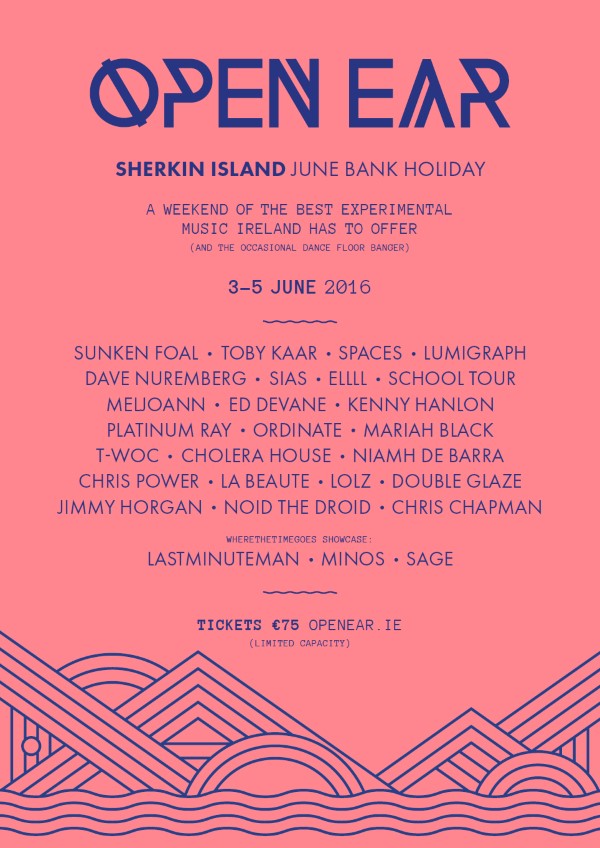