pete·
Events
·30th June 2009·4 min read
Share
40 artists will be exhibiting and auctioning their work at Achieving Art in aid of Saplings school for children with autism.

The work of over 40 Irish and international illustrators, street/graffiti and contemporary artists including MASER, ASBESTOS , DANLEO, SNUB23, SUMS & many more will be exhibited and auctioned in aid of Saplings, a special needs school for children with autism.

Launch Party
featuring
Scribble DJs
The Bernard Shaw, 11-12 south Richmond street, Portobello, Dublin 2
Opening night Friday 17th July ‘09 to August 12th
Doors 7.00pm
Silent Auction
Complimentary drinks
Friday 17th July sees the return for the third year of the hugely successful ACHIEVING ART – a charity art exhibition for ‘Saplings’, a special needs school for children with autism.
Achieving Art was conceived in 2007 by a parent concerned with the chronic under funding of autism services in Ireland. Upon enlisting the skills of good friend working in the street art scene, together they organized the inaugural Achieving Art exhibition in July 2007 which ran for 2 months, also at the Bernhard Shaw . This was the first exhibit of its kind in Ireland showcasing a variety of street & graffiti art alongside contemporary artists & designers. Due to the overwhelming success of the previous 2 years, the exhibition returns for its 3rd outing.

Saplings is a school in Rathfarnam which caters for 24 children in varying degrees of the autistic spectrum disorder. In order for the children to achieve their maximum potential it is necessary to raise funds for speech & language therapy, & occupational therapy. All funds raised during the art exhibition will go towards the provision of these essential services.

Without the artists involved, who have so kindly donated both their time & art pieces to this worthy cause, this would not be possible. Therefore, we are delighted to launch this month long exhibition with an opening party at the Bernhard Shaw Bar in Portobello’s Richmond Street, where all the artists & public are encouraged to enjoy the celebration & hopefully go home with an original piece of work from some of the countries most exciting upcoming artists.
ARTIST BIOGS
MASER:
Maser is a Dublin based graffiti artist and has been painting for over ten years in the Irish and international graffiti scene, painting in New York, Copenhagen, London, Holland, Belgium, Spain and Sweden. He began studying fine art and continued on to graduate with distinction in a BA in Design Communication (graphic design). From that he was awarded Membership of the International Society of Typographic Designers, MISTD. http://www.maserart.com
ASBESTOS :
Asbestos is an Irish street artist who has spread his toxic cloud across Europe and beyond over the last few years (Including London, New York, Barcelona, Milan, Amsterdam, Paris). His art transports passers by from the blinkered safety of their daily routines. His newest work is a combination of photography and painting, painted onto found pieces of wood and metal. He then installs these found objects back onto the streets. He has been profiled in ‘The Art of Rebellion 2’, ‘Candy’, ‘Izastickup’ and he has exhibited all over the world in the last few years. After finishing his show in Dublin late last year, called ‘Hope & Despair’ (with Canadian street artist Other), he jetted off to Sweden with D*Face to spend 2 weeks building a suite in the Ice Hotel, entirely out of ice http://www.theartofasbestos.com/
SNUB 23 :
Snub uses high impact graphics to make a statement on anything from backdrops for parties to album covers, clothes, toys, and then back out on to the streets. Experimenting with new techniques to produce diverse works using stickers, paste-ups, stencils and freehand spray paints. Coming into being in the 1990s, SNUB is the alter ego of a graphic designer, inspired by fictional robot Hammerstein. As part of the Grafik Warfare Collective and as a solo artist, SNUB has exhibited and painted at events across Europe, growing a glowing reputation with every new piece. http://www.flickr.com/photos/43331974@N00
L.e.t
Coming from the graffiti scene the Franco-German born L.E.T. (Les Enfants Terribles) made himself a name with his humorous stencil figures.Starting with stencils in the early 90s , L.E.T experiments with graphics, sprayed scripts or images on posters or walls. He is well known as well outside his home town Dusseldorf due to exhibitions in Hamburg, Berlin, Philadelphia, Milano, London & Los Angeles where his works had been shown as well as in several online platforms. http://www.flickr.com/photos/14244672@N00/
Sums
He has been actively part of the Graffiti scene in Ireland since 1989 and therefore has played a major part in the growth of Graffiti in Ireland and through his involvement and co-organizer with ‘Bridge Over Troubled Water’ aka ‘The Bridge Jam’ festival for the last 15 years, which is one if not the longest running graffiti festival in Europe if not the world. He has played a vital role in increasing awareness around the globe of the Irish Graffiti art scene. Sums designed a mural for the current campaign for Mini Cooper. He has exhibited work in Ireland, England, Scotland, Sweden, Denmark, New York and as far way as Sydney, Melbourne, Adelaide – Australia. Today, Sums works for the leading post production facility in Dublin as a Flame Operator, composting special effects for commercials and film. He along side fellow artists run TDA KLANN, Ireland’s longest running graffiti crew. TDA KLANN have been pioneers in producing some of the largest scale outdoor murals ever seen in Ireland. This year alone has seen Sums travel to Melbourne, Copenhagen, Scotland, New York in a bid to promote Irish graffiti and TDA KLANN. www.myspace.com/sumstar1 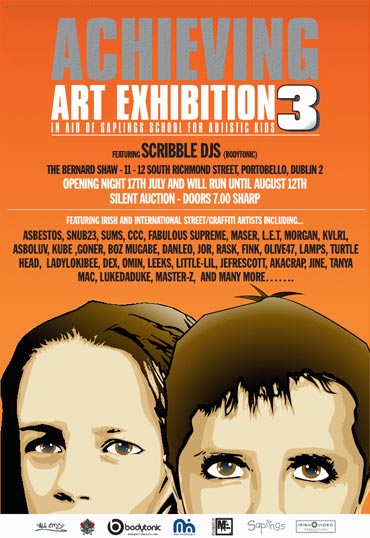 Next
Liquidator To Be Appointed To POD Concerts