The War On Drugs – For The Real Love Of It

Siobhán Kane talks with Adam Granduciel of The War On Drugs who played a sold out show in Whelan’s last week.
The War on Drugs is essentially a loose rendering of Adam Granduciel’s quite eclectic and ambitious grasp on music. Recruiting as he does various musicians to translate the sound (which has included Kurt Vile), the live line-up was never really settled, until around the recording of second record Slave Ambient.

Previously there had been various collaborators and EP’s such as Barrel of Batteries (2007), last year’s Future Weather, and debut LP Wagonwheel Blues in 2008, which was all tangled guitar, with elements of Springsteen and Petty, The Waterboys and Yo La Tengo filtered through. The music is expansive and inclusive, scuzzily romantic, and effortlessly careworn; a testament to the lovely kinship between Granduciel and Vile, as it was really a collaboration between them, and their gifted multi-instrumentalism.

Last year’s Slave Ambient however, expanded further; the road is wider and longer, stopping over in a place where My Bloody Valentine is fronted by Mike Scott and Danny Federici plays keyboards, where propulsive rhythm is the nucleus, and moving ever-forward is the theme. And yet other War on Drugs touchstones remain; isolation, abandon, despair and regret, all couched in something of a euphoric freewheeling atmosphere, reminiscent of The Traveling Wilbury’s, and the ’50’s and ’60’s Bay Area abstract painters Granduciel holds so dear. With songs like the layered ‘Your Love is Calling My Name’, and the centrepiece ‘Come to the City’, Slave Ambient revels in a contrarian way of living, with sampled sounds (on the latter song) moving in unison, kicking against the daily grind. Siobhán Kane talks to Adam Granduciel.

You have been touring for a while now, how have you been finding taking Slave Ambient out live?
It’s been going great, actually. It’s amazing to be so far from home, where you start playing music and play to so many different people from different countries.

And now your concert in Whelans is sold out.
That’s awesome! We played in Crawdaddy in 2008, and after the show we went over to Whelans to have beers, and we were brought into the venue and shown the room, and I thought “man if we ever get to play here that would be the best thing ever”, and now it’s sold out, it’s nuts! How was Kurt’s show there, was it awesome?

It was, and it made me wonder about your own music, and in particular Slave Ambient, which seems even more ambitious in scope than anything you have previously done, do you remember a sea-change some years ago?
I feel like around 2006 – 2007 there was a change in just the amount of dedication, you know? I feel like since I was a teenager, music has been the most important force in my life, I played guitar obsessively, listened to music obsessively. I always loved music and playing it, and loved going to see it and collecting it, but I didn’t know what was in store for me, and around 2001 I was in the beginning stages of trying to work on it professionally, but obviously working jobs and other things. Then around 2006 it was the first time I had been living in the same space for a stretch of time and had some friends around me who were also musicians, and like-minded, and all playing music. To really think of it come full circle, that is also the time where Kurt [Vile] and I spent so much time playing music together. We recorded a lot at each others houses, played gigs in each others bands, and were constantly working on each others songs. That is a time when things took on another level for me. Then after the first record, and around 2009 – 2010, it was a whole other thing, my personal approach to music changed. I was recording in my house and was constantly working on stuff – Slave Ambient started without me really realising I was working on it. For the first year and a half I wasn’t really working on a record, just at home working on whatever, coming up with weird techniques, then in the last two years it was about putting it together, recording it for real. I guess I was always devoted, but after the first record I wanted to make a second record that people would enjoy and see as really special. I don’t want to be the kind of musician that just puts out records and hopes for the best, I want everything we do to be something special and feel like it’s really true. For this record, I knew there had to be something really special in it.

Even the way you described that time in 2006 brings to mind The Last Waltz, which I just saw again recently, it is such a document of kinship, looseness, and a lovely free chemistry between those players.
For sure. You get into a groove where you have been playing and touring, and things come naturally. It is really comfortable to have this band, there aren’t any train wrecks, you know? Even a show that can come across as a little off will still be nice, and when we have a show as a band that is really magical, those are the nights that really come across to an audience. It can’t happen every night, but it’s great touring because you do have those moments, where you can play the same set, but one particular night it could be magical. We just played Berlin and played Slave Ambient all the way through, with all the instrumentals…maybe we’ll do that at Whelans, then come back for an encore, but it’s a nine song encore [laughs].

I have a really special cover song to play there as well, The Waterboys – we are going to play ‘A Pagan Place’, it’s my favourite song! People for years told me that we sounded like The Waterboys, and I kept finding Waterboys records, and when I had some time off I listened to them obsessively, and I think ‘A Pagan Place’ is my favourite one, maybe because it is the first one I put on. I had friends who were like, “this sounds like The Joshua Tree” and I was like “yeah, four fucking years before, dude”. Fisherman’s Blues and all of that is amazing, I felt we had to do a cover for Glasgow and Dublin. Also they really didn’t play A Pagan Place live so often, and it’s a great song to play. It has a similar War on Drugs thing, two chords alternating through the arrangement with piano and bass, it’s going to be amazing.

Mike Scott comes to mind on some of the language you use on this record, when you write of harbours and freeways, there is such a strong visual sense, something your love of photography must inform.
Oh yes, and his lyrics on ‘The Thrill is Gone’, when he says, ‘I am too tired to deceive you’, I love it, and then ‘A Pagan Place’ – ‘Drink my soul dry, there is always more’, I was singing that line for three months and thinking about Whelans.

I was also thinking about Raymond Carver a little in relation to your work, where his language is so sparing, but he often encompasses so much of human mystery in one line.
Oh my God I love Raymond Carver; he’s my favourite writer, my favourite author of all time. I have never been into novels, so I went to him instead.

And there’s his poem Gravy, a testament to struggle, do you think you are attracted to those artists that have struggled?
I think those are the things that I am definitely attracted to in people, and artists. Also people that keep moving forward in spite of minimal success or whatever, and they are kind of unfazed by that, because first and foremost they continue to play music or paint or whatever, it shows the people that do it for the real love of it.

Do you think that through touring, you somehow reconnect with the mystery of music, because it often seems like such a misty thing, it can be hard to hold in your hand for too long?
I think there is something to that, I keep learning. We have been touring for seven months and it can be tiring, but I still get there early to soundcheck, and I love playing with the band, and reinterpreting the songs. I don’t like standing still with it. In Berlin we were walking around, feeling really inspired, it is a great thing when you are against the wall and still do it, that’s when you know you are really doing what you are supposed to be doing, it’s a great feeling.

Jeff Zeigler, your producer, also seems to help you sustain that, he is very like-minded.
Definitely. A lot of the stuff was recorded in different places, but the last year was me and Jeff working on it, he was good about me not having lyrics for a song, and we could work on a song for three weeks, I would keep doing different takes, but would sometimes only progress lyrically as the song progressed musically. There were times when he would say, “that’s the one” and we would go with it, he has a real feel for it. He was there with Kurt actually in Dublin, doing sound. He’s great. With sound you can’t just really throw it up and go with it, it has to sound good.

It really does on something like ‘Baby Missiles’, which instantly brings to mind Danny Federici.
Oh yeah, it’s like my homage to him! I feel exactly the same. I love the music, but I think the Springsteen elements of our music is all the keyboards stuff, it’s all Federici – on Born in the USA those keyboards are amazing.

Do you think that your voice is something that you are continuing to explore, that it is still a mystery to you?
I am still trying to reinvent it as we go, to see my comfort level. I listen to the first record and can’t remember singing it that way, because I sing it so differently now. I don’t have a classically good voice, but when I have a good mix on stage of my vocal I have a real blast with that.

I remember once Owen Ashworth (previously Casiotone for the Painfully Alone) saying that he advised aspiring songwriters to always get a receipt from the ATM machine, as most of his songs are written on those scraps of paper, I believe you are the same.
Totally! Unfortunately I accidentally throw a lot of stuff away. I find stuff in drawers and think “I remember that song” but then throw it away, but don’t worry; it’s definitely stored in my head, for sure! 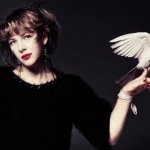 Previous
Niki & The Dove – The Spark Comes From The Person 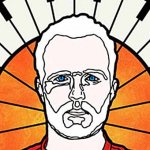 Next
Somadrone – You Learn Lessons