Groove Armada… Super Furry Animals… Jape… The Rapture… you can see all these and more at Lovebox Dublin, which takes place in Malahide Castle on Saturday 21st July –  and the good news is we’ve got three pairs of tickets to give away.

But fIrst, some details:

What began 5 years ago as Groove Armada’s UK club residency, LOVEBOX has grown into London’s only real fully fledged and independent festival with live stages, dance tents, fabulous food stalls, cocktail bars and cabaret all set to a wide and varied soundtrack lovingly curated by its esteemed hosts. On July 21st LOVEBOX DUBLIN by BACARDI will be heading to Dublin to celebrate its fifth birthday, bringing a slice of LOVEBOX to another great city.

“We decided to come to Ireland because it just sort of felt right,” explains Tom Findlay of GROOVE ARMADA. “We did the ELECTRIC PICNIC last year which was really fantastic, and we just wanted to come back and do that again. It seemed like the right time, it’s probably our second home really…the Irish audience is always up for it as you know,” adds Tom.

The Lovebox Dublin lineup for the four stages is:

Send your answer, along with your name & contact details, to [email protected]  – closing date is midnight, 17th July. Oh and remember – this is an over 18’s event.

And we have our winners! The following message board users each gets a pair of tickets:

The answer was of course: Jape a.k.a. Richie Egan. Enjoy the day, chaps. 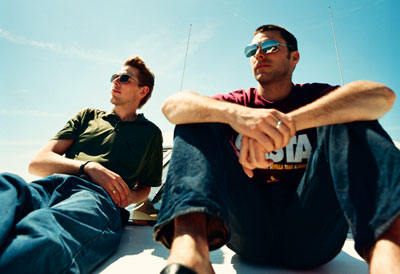 LOVEBOX DUBLIN by BACARDI
THIS SATURDAY – MALAHIDE CASTLE
ONE DAY.
ONE LOVEBOX.
ONE CITY UNDER A GROOVE.
The first ever LOVEBOX DUBLIN by BACARDI is almost here and the schedule for all four stages has been announced. With over 25 acts promising ten hours of cracking in music in blissful sunshine…..OK, we’re hanging in there on the weather and the latest has heady highs of 15 degrees with sunshine and according to metcheck.com NO rain. The tents and stages are in situ on the mud free rolling lawns, ready when you are!
The Super Furry Animals or a DJ set by The Rapture? Daddy G or Groove Armada? Sasha or Just Jack? The choice is yours but the one guarantee is LOVEBOX DUBLIN by BACARDI is the perfect escape from a conversation about the weather.
One day. One Lovebox. One city under a Groove.
Tickets E79.50 from usual outlets and on the day.
Strictly Over 18’s – Gates 1pm – Licence Granted.

Tickets are 79.50 euro for the one-day event and further information is available from www.lovebox.ie