What Book Did You Read Last Night??? (1 Viewer)

A realistic enough take on how climate change might be stopped over the next 50 years or so, maybe the only optimistic thing i've read on the topic. Even his optimistic, try and keep things the same, take involves mass death and climate refugees by the million, targeted terrorist attacks killing all the rich, and a complete upheaval and overthrow of capitalism as it stands.

The writing is functionally good, has a lead character who is Irish called Mary who occasionally says morto things because of her "Irish sensibility".

He really works hard at the economic stuff and the huge resistance to change there, a lot of talk of people who'd rather short the entire of civilization than change the systems in place, it's quite interesting from that perspective. If they kept the detail in it'd be a better tv show than book i'd say, but worth a read nevertheless. I feel like the "Paris 2015 turned out to be the most important deal ever made" lines were thrown in specifically to gain favour with Obama.
Last edited: Nov 25, 2021

FAO veterans of The Three Body Problem bukes - is this any good?

i'm reading a short history of germany at the moment - at about 1800 now - and christ, it's a headmelter. at least with ireland, you know where the place stops and starts, but with germany it keeps moving around, disappearing and reappearing and it's hard to keep up.

Ten Thousand Light-Years from Home by James Jr. Tiptree aka Alice B. Sheldon. I only made it through half of these short stories. I feel sort of bad as she’s so well regarded but the writing just annoyed me. It was like it was purposely trying to subvert and confuse, rather than delight and challenge. Having to read over a sentence three or four times becomes a chore after a while. Shame, because the actual story ideas were good.

Sweet Home by Wendy Erskine – I loved this collection of short stories. Great Belfast humour and a nice mix of sadness and fun and some shocking explorations and visceral moments. Consistent too – no disappointing stories and the ones that were great were really great. One of the best things I’ve read all year.

That Old Country Music by Kevin Barry – And then I read this, which completely bowled me over and might have been even better. I think it’s the best thing he’s written. There were more than one or two that left me hollowed out. Wow. I do feel that KB walks a tightrope in particular with his mad prose and especially his dialog but in this case he got it just right.

The Fifth Season by NK Jemisin – I had actually given up on this previously but gave it another go based on the fact that no less than three people said it was amazing. I thought it was just grand. I don’t know, I’m kind of over fantasy where magic people have power of stuff like rocks and crystals and that. It’s part one of a trilogy – not sure if I’ll read the whole lot based on this one.

The Cyberiad by Stanislaw Lem – Completely silly, almost cartoonish sci fi, if you want to call it that – more allegory, really. All about two ‘constructors’, Trurl and Karpaucius, who go about on adventures and I guess represent scientific endeavour. Some great ideas in this and I laughed a good bit.

Crash by JG Ballard – I picked this up in a secondhand bookshop but didn’t enjoy it much. Non-stop references to penises, anuses and lady’s pubic areas (but never their faces/personalities) while in car crashes, watching car crashes, or fantasising about car crashes. As a reader you can either view the sex as depraved, in which case after a while the descriptions just become really silly, like a cheap airport dirty novel (or worse, a pastiche of one), and the whole lofty intent of the novel falls like a house of cards. Alternatively you can switch that off and view the sex as mechanical and the characters as machina like Ballard, I suspect, intended in which case there’s nothing to grab onto except the central conceit, so it becomes a protracted thought experiment (“we’re becoming machines”) that would maybe have been fine as a short story but as a novel gets a bit old, though this is somewhat tempered by his fluid, elegant style. It did feel a bit dated, like I would imagine the film would now.

The Lathe of Heaven by Ursula K LeGuin – Really good, this. I got the feeling she just knocked this one out but still, wow, what an idea, and executed so well. All about a guy who rewrites reality with his dreams. It doesn’t have the arch prose style of other books I’ve read by her, or at least not all the time. And the characters are your classic 60s-70s sci fi characters, American and wise-cracky and jock-y. But that’s not a criticism – it was all the more readable for it.

The Master of Petersburg by JM Coetzee – semi-fictional story about Dostoevsky when he went to St Petersburg after the death of his stepson. You can’t really go wrong with Coetzee, he writes masterfully and he always has a nice balance between the inner world and the outer story. This was pretty great for the first three quarters but did flag a bit, in particular with the story surrounding the revolutionary Nechayev.

Hold Up the Sky by Cixin Liu – Half way through this set of short stories (some quite long), all sci fi and all batshit, predictably enough, full of cardboard cutout characters, stunning ideas and daft plotlines. Great fun though often quite nihilistic. You’d wonder does the lad have any hope for us at all.

The Great God Pan and Other Stories by Arthur Machen. Oh yeh this is the good stuff - 19th Century gothic folk horror stories with a dash of gruesome body horror. Way ahead of its time. Machen is the master.

Then Pilate took Jesus and had him flogged. 2 The soldiers twisted together a crown of thorns and put it on his head. They clothed him in a purple robe 3 and went up to him again and again, saying, “Hail, king of the Jews!” And they slapped him in the face.

4 Once more Pilate came out and said to the Jews gathered there, “Look, I am bringing him out to you to let you know that I find no basis for a charge against him.” 5 When Jesus came out wearing the crown of thorns and the purple robe, Pilate said to them, “Here is the man!”

6 As soon as the chief priests and their officials saw him, they shouted, “Crucify! Crucify!”
Only kinda messing but It just crossed my mind the obove is body horror. Other than that I'm not really making any comparison.

David Kronenbourg said:
The Great God Pan and Other Stories by Arthur Machen. Oh yeh this is the good stuff - 19th Century gothic folk horror stories with a dash of gruesome body horror. Way ahead of its time. Machen is the master.
Click to expand...

Fuck yeah! Machen is unreal. I read this in Eurodisney on my honeymoon.

Some of the material hasn't aged well. I was a big fan as well.

snakybus said:
The Lathe of Heaven by Ursula K LeGuin – Really good, this. I got the feeling she just knocked this one out but still, wow, what an idea, and executed so well. All about a guy who rewrites reality with his dreams. It doesn’t have the arch prose style of other books I’ve read by her, or at least not all the time. And the characters are your classic 60s-70s sci fi characters, American and wise-cracky and jock-y. But that’s not a criticism – it was all the more readable for it.
Click to expand... 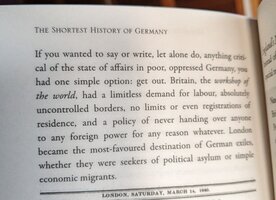 How times have changed

Re-read Simon Price's Everything recently enough. Quite strange looking at it now, coming out only 4 years after Richie Manic's disappearance. When we wanted them to release another Holy Bible and thought he might be skipping about India.

Reading Tim Key's first lockdown book at the minute He Used Thought as a Wife, which is really good. And started Lord of the Rings for the craic.
New posts

Hip hop as poetry (in schools)