Black Sun are delighted to announce that musician, artist, actor, film-maker and author, Jean Louis Costes is doing his first and only Irish show in Cork at the Granary Theatre on September 26th. Costes has been working on a special show in english, combining performance and music, for this gig. Due to the graphic nature of his live shows, this performance will be strictly over 18's.

Here is an interview with Costes and Philippe Simon of Prism Escape
+ + + http://www.digital-athanor.com/PRISM...?id_article=82 + + +

.|..|*Jean-Louis Costes in scene with Vincent Cassel from the movie "Irréversible" of Gaspar Noé (2002) 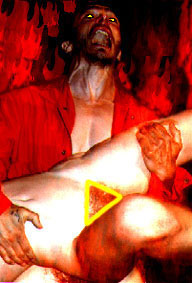 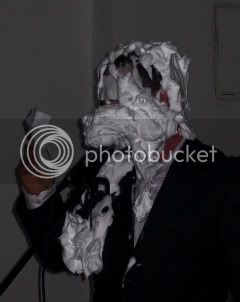 Not Abel and Alex Conway
http://www.myspace.com/kunstfds

Congratulations on getting Jean Louis Costes! That's going to be an amazing night!

Thanks lady, it sure will. I mentioned already on Metal Ireland that this was a pretty unique event. Here's some more info for y'all...

Jean-Louis Costes is a controversial, ecstatic and extreme performer. Since 1986 he has worked primarily with music, releasing over 40 albums on cd, and others on cassette. He has also made several full-length and short films (and appeared in Irreversible and Baise-Moi). All of this work comes together in his performances, such as Little Birds Shit (2007) a two person drama about a repressed couple who ‘look for more’ in S/M, or in The Holy Virgin Cult (2008). The shows are highly physical and also highly-charged, this is an interaction that stamps all over social networks and wants to break things down. His work is a physical meditation that cannot live with the everyday. He loves shit, sex, the body as tool, the body as object, the body as something more and less than a person. He also has fun with fears of racism, with an album called Nik ta Race (Fuck your Race). There can be no borders for Costes, no demarcation lines, as we all come together, immersed through fluid, ranting and black (or brown) humour. If this all sounds too serious, it’s not – Costes is always humorous, nothing is sacred – and that means all can be made funny. The word ‘uncompromising’ if often used and rarely lived-up to, but the author of the novel Viva la Merda! (Long Live Shit!) is just that. Highly theatrical, but shunned by official theatre, we have sneaked him into one - he is fierce and joyous as he pulls down social taboos, and he will prise open your ears, eyes and head with this first ever performance in Ireland.

A selection of Costes' short films will be screened during the night. Vegan cakes and records/tapes/cds from distro's Bold Lump (Dublin) and Rimbaud Records (Cork) will be available for purchase throughout the night.

Can we expect any Thumped heads at this? Gimme a holler if ye have no place to stay. I'll try to be of assistance x

Here's a link to some beautiful pictures taken by Donal O' Caoimh at the last Black Sun in May. 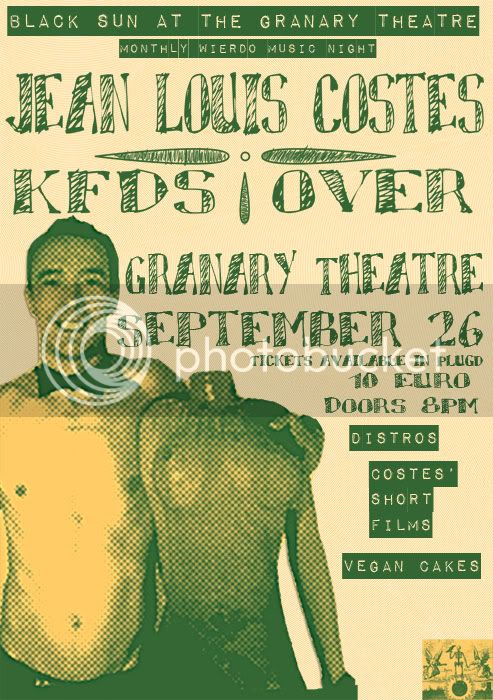 KFDS are collaborative artists Not Abel and performance artist Alex Conway. They deal in brooding, darkly vibrant atmospheres, where treated vocals, tapes and bass swarm around rogue trance beats and the remnants of disco pulses. Combining music and performance, they build on prepared materials and texts through improvisation. Combining from these sounds is a physical performance that is intimately touching, maybe too intimate.
http://www.myspace.com/kunstfds

OVER -based around the duo of JG and AD with a revolving collaborators and assistants, OVER is an entity dedicated to encapsulating dread through sound.Inspired by horror films,creaking doors, haunted houses and the moment where TV static takes on a sinister life of its' own. Bring a blindfold.On this occasion,OVER will be augmented by VL, BC and SG.
http://www.myspace.com/oovveerr 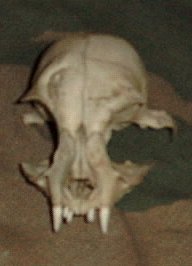 Anyone curious about this monthly Black Sun thing oughta take a look at this new innerview by Aoife B on her Sweet Oblivion blog. Click on the fangs y'all.

DotDotDot will be selling stuff at Black Sun alongside Bold Lump and Rimbaud Records.

Myself and Paul are off to check out the No Fun fest this Thursday in Sweden. I gots my eye on some people there I want to invite to Black Sun in the new year. If anyone's innerested, we're doing a stopover at Resonance fm tomorrow where Paul's doing a noise show and I'm lurking in the background. 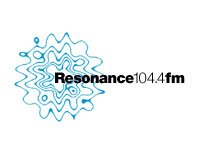 After party in the Quad!! Weirdo DJ sets/visuals from Brian Conniffe and Black Sun DJs 12am-2am. 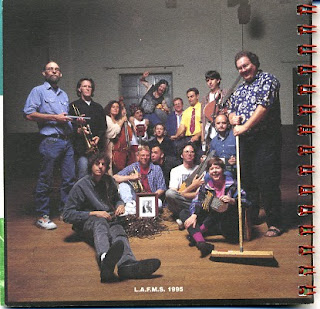 Vicky, I may sneak my way into the dj box when noone's looking. Be forewarned.. 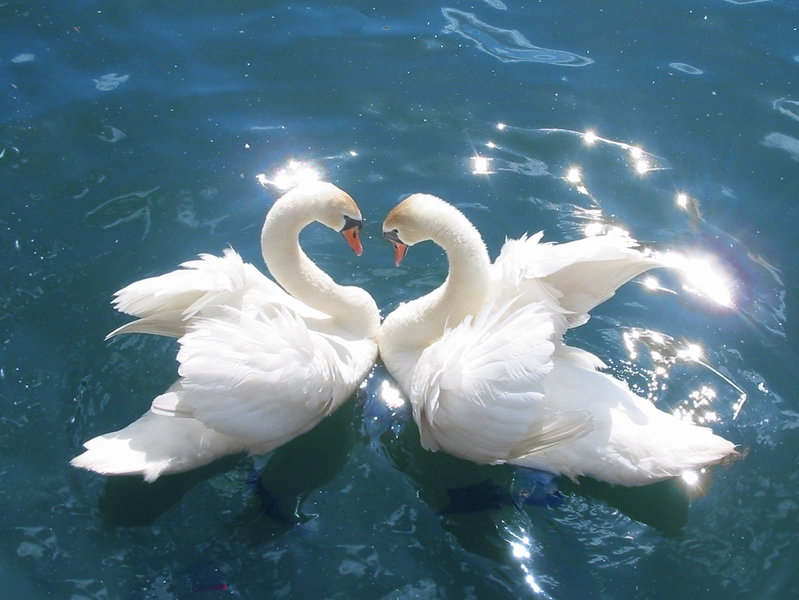 haha, you know it!

Jean Louis Costes will be doing an in-studio interview on Cork Campus Radio's ArtBeat this coming Friday between 4.30 and 5.30pm. Tune in on 98.3fm. Listen online here:
http://www.ucc.ie/ccr/

curious and a little nervous about this but looking forward to it!!
getting my house fix friday bai to get it out of my system for the rest of the weekend bring on sat!

the venue is especially remarkable, and pretty much perfect. it's a great example of two recent trends in independent live organisation.

firstly, the move of live music away from bar / pub based venues and function rooms - as can be experienced in dublin in the appearance of independently created and maintained gallery and performance spaces - is a massive breath of fresh air and revitalisation. the move away from music being co-opted by bar owners (who up until now have maintained a monopoly which has forced artists out of a sheer lack of possibilities to be complicit in) who care only about alcohol being sold is one that must be applauded and encouraged (for instance, a certain dublin venue - a function room in a large pub - which i will refrain from naming shocked me recently by refusing to give out glasses of water at the bar). it means the social aspect of the evening is based on a shared experience of the performance and not on just having a place to drink and talk with friends during performances. it really is a vital thing to have attention focused in this context, live musicians have been forced to provide background music for far too long now in this country. any independently organised events which re-instate the art as the primary focal point must be supported if we want to see situations where organisers, audiences and performers can engage with the least amount of irritating distractions (from ignorant bouncers looking for trouble to sound bleed from bar djs to drunks loudly talking through quiet performances) and ultimately enjoy the event to it's fullest.

secondly, the combination of music, performance art and visual / film artwork into a congruent whole. personally, the more the divisions between these various forms of creative endeavours dissolve is an important development, as not only can it make for a more stimulating and enveloping overall experience, but it also allows the audience to experience aspects of expression that they may not ordinarily be exposed to or inclined to seek out. the move away from the assumed high level of academic entry implied in the art world and it's galleries into a situation which is more accessible to anyone in the audience and more likely to reveal to people sights and sounds that may be entirely new to them. it's much more exciting to go to a gig and see and hear things that you may never have experienced before. sure, you may find it bizarre, confusing or difficult, and some of it may not be to your taste, but the possibility of the discovery of something new that really excites you should be an irresistible one. you can either take that gamble and check these things out, or you can accept an endless stream of derivative rock bands and bland singer-songwriters.

and with regards to the audience turn out which was considerably lower than expected, it's a variable which has become pretty much impossible for organisers and performers to predict. i would say that if you want to see more well organised events featuring genuinely unique and interesting performers in perfect venues which value the highest quality of music over how much cash is made from booze, then you must support these gigs. they will not be able to continue without you.

a couple of other brief remarks on what was, all things considered, a flawless venue used to its greatest potential. the incredible baked goods, to which i dedicated the first song of my dj set to, and the excellent taste in the foyer music, including maurizio bianchi and coil... it's a rare thing to be able to enjoy such delights in such a comfortable setting organised and manned with consummate professionalism.

kfds : the gorgeously minimal yet lush rhythms reminded me very much of chris carter's work, principally on his "e.a.r. 3", carter tutti's "cabal" and throbbing gristle's "third mind movements" (incidentally the only consistently decent thing the reformed tg have done), along with a touch of coil's "red skeletons". combined with an idiosyncratic treated vocal performance, it made for a rather mesmeric bath of sound. very good.

over : it's always quite difficult to gauge how one's own performance sounded from within the eye of the storm, so to speak. it seemed to come together well and seemed to go down well (giggity).

jean louis costes : i actually have never heard any of his music or seen any of his films, which is fine with me since i wanted to have no expectations for his performance, which i found hugely entertaining. fun and devoid of pretension, and an absolutely riveting physical performance with incredibly tight timing (his syncing to the musical cues exemplified his rigorous preparation). some members of the audience were surprised that it wasn't confrontational, an assumption perhaps based to some extent on the comparisons to gg allen and whitehouse, though i believe they refer more to the scatological energy in the case of the former and sloganistic poetic comedy in the case of the latter.

the after-party was an absolute blast for me, as i took over the dj-ing duties for the whole night. many thanks to the mitzi boys who were coming up like bastards and to the glitter girls who swung their handbags and posteriors with great aplomb.