I saw a thing in the garden (1 Viewer)

A raven just dropped by there.
I was sitting working and I heard him chuntering away to himself, perched on the wall outside, like an extra from a spooky movie. The beak on this lad.

I've seen ravens along the cliffs, but not in the garden before.
S

60 quotes from The Raven: ‘Once upon a midnight dreary, while I pondered, weak and weary,Over many a quaint and curious volume of forgotten lore,While ...
www.goodreads.com

I saw a heron catch and eat what I think was a mouse,just along the canal there.

I also saw a shoal of little fishes in the canal.
M

flashback said:
A raven just dropped by there.
I was sitting working and I heard him chuntering away to himself, perched on the wall outside, like an extra from a spooky movie. The beak on this lad.

I've seen ravens along the cliffs, but not in the garden before.
Click to expand...

do you get choughs down that part of the world?

magicbastarder said:
do you get choughs down that part of the world?
Click to expand...

Yeah, there's, reasonable numbers by me. I'd be up the cliffs roughly every day and I'd probably see choughs most times I'm there.

At the start I could tell them by the weird CHEEEEah call they do. I didn't realise that they were the ones that were making that noise until I saw one up close and was looking at their bright red curvy beaks when he took off and did his chee-ahh thing.

After a bit I noticed that the choughs do this special flying saucer thing when it's windy. They somehow make their wings into a disk shape, with their heads sticking out at the front, and shoot along for a moment. They don't always get up to that flying saucer craic, but they're the only ones that can pull it off as nicely.

The peregrine chick that they were all screaming and roaring about during the summer is beefy now, got into a bit of a fly off with a raven as I was on the way home.

GO said:
I saw a heron catch and eat what I think was a mouse,just along the canal there.

I also saw a shoal of little fishes in the canal.
Click to expand...

There was a cormorant out the front there manfully trying to choke down a little plaice. He'd flip the plaice up and do the gulpy open beak bit, but the plaice just didn't fit and eventually fell out.
So he'd gather the poor bastard back up and try again. This went on for minutes until it gave up. I'd imagine the plaice wasn't in the best nick afterwards.

There's been very few fish around over the last couple of weeks though. I can see wrasse and little pollock lurking around the rocks if I'm swimming with goggles and looking for them. The odd shoal of sandeels. I dunno... feels like not very many.

I saw two tuna fish jumping just off the shore where I usually swim.

At the start I thought it was dolphins messing with me, because the first time they jumped it was about 3 meters from me and I didn't really see them in the air, just splashing back in. But later I was sitting on the rocks and saw them jumping in exactly the same spot again, and they have to have been tuna, they look nothing like dolphins and jump nothing like dolphins. I didn't even know tuna were around Cork.

I rescued a frog from the front garden yesterday. Saw something move while I was strimming the long grass by the wall and did a double-take. There were two of them, I think, but I was only able to catch one. Took it across the road to the shaded grass by the rail line. Little brown one, camouflaged as a leaf!

There was an unwell gannet wandering about the place there earlier. The WhatsApp group was going berserk.

I saw a squirrel get cornered and chased by two different cats. Down the gangway, onto my boat, across another gangway onto an attached boat, then onto another. They'd left their door open so squirrelly nearly went in there. That boat is tiny, would've been carnage.

Cat's are smart but squirrels are smarter. He got away.

There's dead, and dying, gannets cropping up all over the shop now. Seems like there's some class of avian flu that's knocking these guys really badly.
M

yep, it's caused major mortality in the UK. surprised it took this long to get to ireland.

flashback said:
There was an unwell gannet wandering about the place there earlier. The WhatsApp group was going berserk.

The sick gannet people got called, and I believe he's been carted off to the sick gannet recovery and wellness center.
Click to expand... 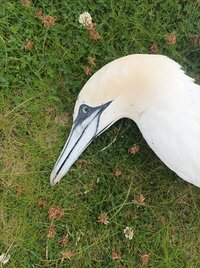 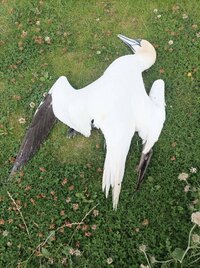 Man. I really like gannets too. They're regularly diving away in front of the house. Poor lads.

I'm starting to think this peregrine is mates with this raven.

Almost every time I go down for a swim I'll see them, well, what looks like playing. I've been suspecting they're playing for a while now, if they aren't at least one of them is very keen on flying around with the other for some reason.

It doesn't sound likely, a peregrine being mates with a raven, but I know the peregrine was a chick this summer so it's possible they're still doing their youthful things?

I think wrasse must do that sort of harem thing, with one boss wrasse guarding an especially tasty rock and running the show, and loads of little wrasse hanging around with her. Him? They stake out peaks, and you'll see them throwing shapes and looking tough.
S

Sticking my head out the window over the last few weeks, yesterday I saw a dragonfly. Not sure I've ever seen one in a city.

In my first week here I peaked at a crab in the shallows. The next week I saw an upside down dead crab. The next week I could only see one crab leg. I hope there's a happy well fed fox somewhere.

There's a heron and a mad coot and an angry moorhen. There's swans around but they hang out on the other side of the boat, swanning around like a Polish delicacy.

seanc said:
In my first week here I peaked at a crab in the shallows.
Click to expand...

in the shallows of where? Are you living by an estuary or something?

If you can even get a barrel and lob in some duckweed, elodia maybe, and a few reedy sort of things sticking up you'll likely get dragonflies breezing through. They seem to crop up all over the place, even in urban type settings, once they have water and stalks to perch on to look at the water.

I'll be putting in a little pond in the non-sea side of the place here. There's a sporadic leaky tap here, which if it's leaking invites all sort of birds and things down, and you'll see the odd dragonfly ripping past if they see the pool forming. They're really active and good at seeing stuff.
New posts