The album contains "…ten songs about suburban boredom, nightmares, sex on TV, Angry bums, insomnia, and dead gangsters all churned up from Funk, Rock and Electro influences such as Bowie, Prince, Gary Numan and Talking Heads." and will be available at the launch gig or can be picked up at music shops in the city centre soon afterwards. Alternatively, go all modern and get it online at www.downloadmusic.ie and www.artists-first.net. 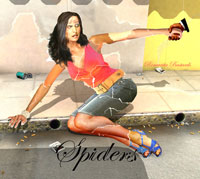