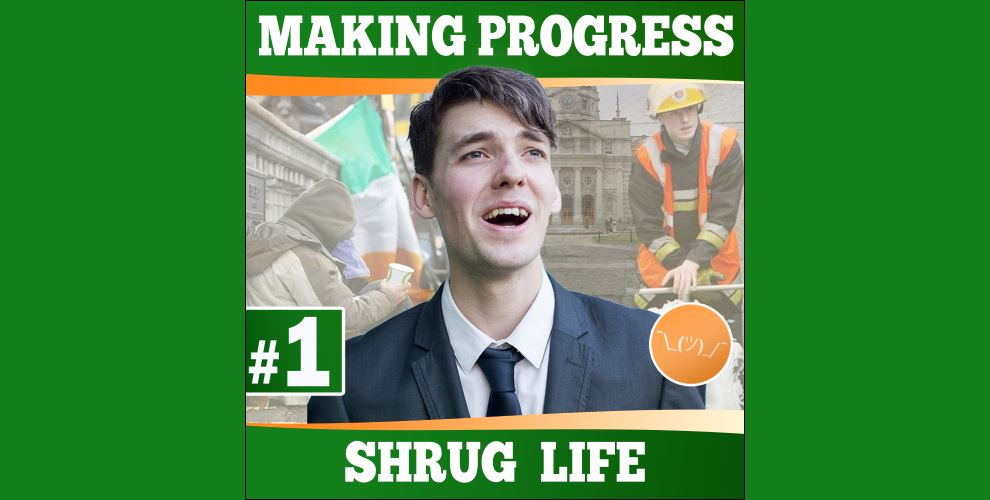 Shrug Life today stream the follow-up to their acclaimed EP ‘The Grand Stretch’ (Popical Island) with the political pop satire “Making Progress”, released free for Election ‘16.  Evoking the rabble rousing spirit of The Jam and the biting black humour of The Smiths, ‘Making Progress’ is fuelled by the uncertainty and false promise of electioneering Ireland.  Produced by Fiachra McCarthy (Squarehead, Dott, So Cow) and mastered by Mark Chester (Ginnels, Paddy Hanna), the song will be available as a free download from the band’s Soundcloud and Bandcamp pages from today.

About Shrug Life
Danny Carroll (vocals/guitar) and Keith Broni (bass) first met in secondary school aged 15, where after bonding over the melodrama of Morrissey and the bombast of Queen they set about making overly earnest rock throughout their formative years.  With Josh Donnelly joining on drums, the trio started jamming their first self-penned songs in late 2014.  Their debut EP‘The Grand Stretch’ was released via legendary local label Popical Island in July 2015.

Shrug Life will be playing the Bernard Shaw this Thursday (18th February) at 9pm – the venue has a capacity of 80, and it’s free entry, so vote early and vote often.