Out On A Limb May News

The latest news on Crayonsmith, Rest, Giveamanakick & Hooray For Humans from Out On A Limb records.

Here's the the latest on Crayonsmith, Rest, Giveamanakick & Hooray For Humans from Out On A Limb records.

Ciarán (Smith) has just returned from a very successful West Coast tour in the States (and Canada!). Here is a message from him: “The US West Coast solo tour was a great success which saw me go from Vancouver to LA hitting everything in between over the course of one month. There's some new pics including me in front of the Goonie's house at www.myspace.com/crayonsmith. We plan to return as a band within the year so we'll keep you posted”

On the Irish front, Crayonsmith be playing the Boom Boom Room, Dublin on Friday June 8 with the excellent BATS and Thinguma*jigSaw opening. We're also delighted to announce that they’'ll be touring with Ted Leo & the Pharmacists and playing with Monade (Stereolab's Laetitia's side project) at the end pf June.

Please check out The Vinny Club's excellent version of "Lock-In" from the 'Stay Loose' album made using a SID chip (used back in the 80's to write the music for Commodore-64). It's in the mp3 section on Crayonsmith’s Myspace . Check www.myspace.com/thevinnyclub out also 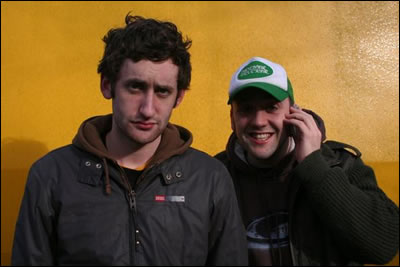 giveamanakick will be appearing in an Irish town near you soon as part of the 2fm 2moro 2our, that also features Messiah J & The Expert and The Flaws. This shows are free, but you got to apply for tickets, so go to http://www.rte.ie/2fm/2moro2our/
Here are the dates in full
Wednesday 16th May: The Music Factory, Carlow
Thursday 17th May: Electric Avenue, Waterford
Friday 18th May: Trinity Rooms, Limerick
Saturday 19th May: Cyprus Avenue, Cork **SOLD OUT**
Sunday 20th May: Cyprus Avenue, Cork – All-Ages gig
Monday 21st May: Roisin Dubh, Galway
Tuesday 22nd May: The Left Bank, Sligo
Wednesday 23rd May: Spirit Store, Dundalk **SOLD OUT**
Thursday 24th May: The Nerve Centre, Derry
Friday 25th May: The Stables, Mullingar
Saturday 26th May: Whelan's Dublin **SOLD OUT**
Sunday 27th May: Whelan's Dublin – All-Ages gig

A new giveamanakick session went out on Dan Hegarty’s show on Monday night/Tuesday morning of this week with 3 tunes. Not sure if this will be repeated but will update when we know. Album number 3 will be recorded in June.

Hooray For Humans have some shows coming up, including a show in Limerick with Dry County (who are about to release their excellent debut LP “Attention Falls” with our good friends at the Lazybird Label), plus dates in August at the Indie-pendence fest in Mitchelstown, and a tour with Alps of New South Wales(from Australia). 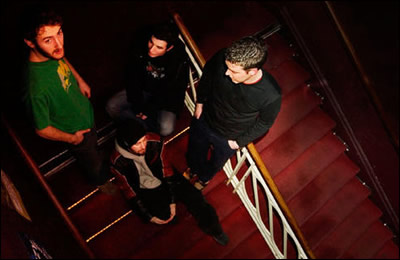 “Operation: Impending Doom” is now available to buy as a digital download at the following places:
http://playlouder.com/downloads/rele…ing-doom-fi-0/
http://www.fnacmusic.com/ (spain)

It will be available via iTunes any day now…On the live front, we’re delighted to say that Rest have been confirmed as guests to the mighty ISIS when they play Dublin later this month. Some more dates are been lined up for the summer, and we will keep you updated:
Wednesday May 23rd: Temple Bar Music Centre, guests to Isis

Next
The Chalets @ Drogheda