Cyclobe: “The Eclipser”
7″ single limited to 300 copies, clear vinyl
Cyclobe (1999-present) are a music duo based in London, formed by Stephen Thrower and Ossian Brown. They make hallucinatory electronic soundscapes by mixing sampled and heavily synthesized sounds with acoustic arrangements for strings and woodwind. Their approach draws upon diverse forms, including acousmatic, drone music, dark ambient, noise and sound collage. Ossian Brown worked with Coil from 1999 until the band’s cessation on the death of John Balance in 2004.

Fear Falls Burning – “Dead of Night”
7″ single limited to 300 copies
Fear Falls Burning – founded in 2005 as an exercise in minimalism and as a conscious counterpoint to the refined complexity of vidnaObmana, fear falls burning has gradually turned into a musical meditation on purity and subdued power. as part of this transformation, the guitar has evolved from a mere instrument into a veritable shamanic tool for trance. in a sense, dirk serries, who has held a deep fascination for the subtle power of drone music ever since embarking on his personal odysee in 1984, is returning to his roots here: fear falls burning presents listeners with a primevally physical experience that is in turns contemplative, rhythmically agitated and thunderous.
“From huge walls of sound to soft humming shimmery buzz, My Bloody Valentine-ish blown-out bliss to raga-like buzz, Fear Falls Burning is a truly unique and surprisingly melodic take on doom and drone.” Aquarius Records

All releases are available to buy at http://www.dotdotdotmusic.com/ 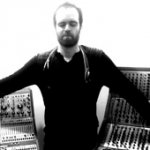