LPX‘s mini album ‘Experiments in Dub & HiFi’ is due for release on 25th August with a launch gig in The Boom Boom Room.

LPX‘s mini album ‘Experiments in Dub & HiFi’ is due for release on 25th August with a launch gig in The Boom Boom Room.

After a quite year (and a bit of a rethink), LPX finally got ’round to remixing and remastering the free download release of "Experiments in Dub and HiFi" and is now putting it out on a bright shiny sparkling CD.
It’s still (mostly) free however – if you wish get a copy, just send a package envelope with cost of postage and it will be distributed immediately.

This 9-track piece (that was originally released on www.alphabetset.net) lasts exactly 30 minutes and mixes electronica with chilled out orchestral and folkesque bits and bobs (which recently got its live airing as the back Martin Hanley-Hopkins)

This particular jobby was written, recorded, mixed and produced by Leigh O’Gorman.
There will be a gig to celebrate all of this!! Not only will LPX/Martin Hopkins be performing, but you may also see the likes of LeGalaxie (formerly 66e) and Fringe with more to be confirmed. 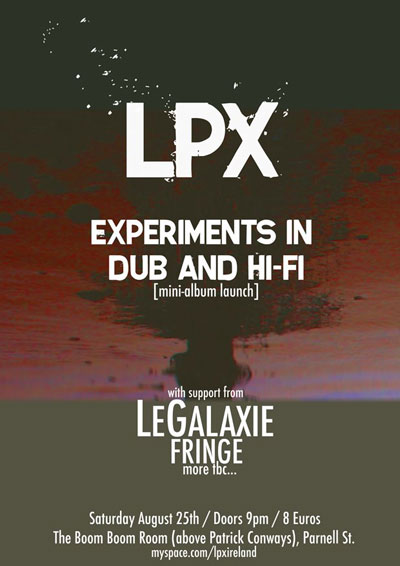 Next
The Flat Lake Festival