Large Mound – My Whole Life Is Have To

Large Mound release their latest LP ‘My Whole Life Is Have To‘ on November 9th.


Large Mound release their latest LP ‘My Whole Life Is Have To‘ – the much anticipated follow up to 2004’s ‘Go Forth And Amplify’ –  on November 9th. You can check out a track from it, Rock Is For Sanity , right here, or you can buy the (download only) single Your Holiday Sounds Boring from Outersounds for 99c. A video for Your Holiday Sounds Boring has been shot in Seomra Spraoi and should be available Read Soon Now.

The LP will be ofiicially launched at a gig in the Boom Boom Room on November 9th (although you can pick it up in Limerick the night before), featuring an extended Large Mound set sandwiched between the instrumental ROCK of  Limerick’s Sea Dog and the DJ & MC duo of You’re Only Massive. Admission is €10, which gets you either a CD or limited edition vinyl copy of the album. Winner. 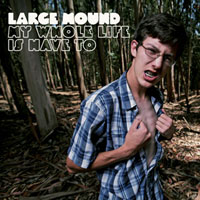 My Whole Life Is Have To is the fruits of a years rocking in the life of the Mound. It was recorded in Dublin and Navan; mixed in Dublin, Portland and Chicago; and mastered in California. It sounds big, it sounds tight. Its got 13 killer songs that run the gamut from sweet pop, to grooving pedal to the floor riffing, to manic guitar mayhem. Lyrical subject matter covers ongoing Mound fixations such as work, rocking and lifes little peculiarities; as well as more weighty subjects such as hating your friends, and the problems that arise when one accidently becomes immortal. Weve all been there.

The bands biggest problem was trying to decide what would be the first single, as there is a Hysteria-style abundance of potential radio play hits. In the end, they plumped for the track Your Holiday Sounds Boring, a pert little riffer from the pen of Mark Jordan. A video for "holiday" has just been shot by award winning film maker Ian Lawton in the social centre Seomra Spraoi in Dublin.