It’s the first day of Primavera Sound 2010 and by lunchtime the area of east Barcelona around the forum has been taken over. Manbags, obscure band t-shirts, and loads of Irish people. I don’t think I’ve heard so many Irish accents since the last time I was in Berlin. The crowd look like they’ve been airlifted from ATP: the sort of people who quite like festivals if there’s a nice bed and a mirror for flouncing one’s hair in the morning. The festival is in the area behind the forum and a couple of things quickly become apparent. Firstly, the stages are well spaced and are at a variety of levels, meaning there’s no sound spill between stages. Secondly, despite there being plenty of toilets and urinals, people micturate everywhere here, like their brethren at Irish festivals. There are loads of hilly grassy areas, but sitting near the bottom of these is risky business as ladies and gents further uphill empty their bladders with impunity. 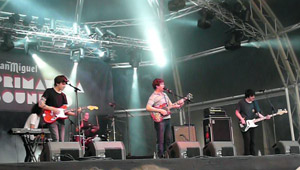 There’s music too. The Pitchfork stage is guitar-heavy and several undergrad-types are playing them at 7pm. Surfer Blood look like four fresh-faced young chaps who decided to let the hairy acid casualty from down the road in to their band to make it more interesting. The hairy lad plays keyboard, extra drums and some percussion. Other than that it’s pretty one-dimensional guitar rock. The big cheer when ‘Swim’ gets played shows that everyone else was waiting for the hit too. Then the exodus begins for The Fall on the main stage. The current Fall is incredibly tight and, despite Smith’s stated dislike of musicians who can play, more proficient than any Fall band I’ve seen since Hanley & Scanlon were turfed out. The drummer is particularly nifty. No fills. He has a spare second snare beside the kit. This is Smith’s coatstand and the leather jacket is placed on it when he makes his showman’s entrance a minute in. There’s a lull halfway through and even Smith seems bored, so he does his usual routine of messing with the amps. Other than that it’s solid stuff, almost all from the last LP, with a great Sonics cover tucked in the middle. 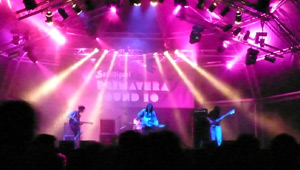 The XX make even fewer concessions to showmanship. There are the white Xs in front of the sampler and one big one behind them. Playing their low-key, minimal tunes to several thousand people in the rain requires some adaptation. This is done by chucking in tons of noisy sub-bass and adding loads of fancy lights. Two songs in, Islands sparks a big singalong, but there’s not much variety. The set ends with loads of filthy noise and the bassist leaping about like a madser thrashing a cymbal for about a minute. The next big draw, surprisingly, appears to be Tortoise, but I managed to avoid the sound of polyrhythms and marimba narrowly drowning out the sound of several thousand chins being stroked. In the meantime, I made the poor decisions to see bits of Smith Westerns (more dull guitar rock) and Crocodiles (coked-up yahoos take on the hits of the Jesus & Mary Chain via Clinic with the tunes surgically removed). Comanechi play more enjoyable tuneless noise to 150 or so sweaty punters in the Ray-Ban Unplugged tent. Most of these punters are holding cameras. There is an audible groan of disappointment after drummer/blogger/self publicist Akiko Matsura shouts “I need to get naked” and they realise it’s just a song title. 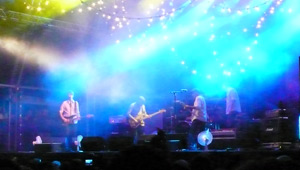 Judging by posters, set length, and the crowd at the main stage, Pavement are tonight’s big draw. A few minutes before they’re due on, Malkmus jogs across the stage with a wave, and within seconds they’re away. They begin with Cut Your Hair and by the guitar solo bit his guitar is already being played behind his head. This is the way for most of the set as he showboats through (especially Spiral Stair’s) songs with guitar either held either above his head or swung about like a baseball bat. Still, at least he seems enthused, and the whole band seem pretty excited to be there: “You can tell it’s a big gig. The whole band are wearing button-down shirts.” Gaps between songs are kept to a minimum (at one stage Malkmus shouts “Allez! Allez!” to speed things along) so it takes Kannberg two gaps to tell his anecdote about getting into a lift with Mark E Smith, two of Mission of Burma, and the bloke from Wire. “And they didn’t recognise me!” Songs from the first 2 lps get the best response, while later ones seem paper-thin, but the set as a whole is a bit of a triumph. A couple of pointless guests are wheeled out (a Broken Social Scene shouts along with the “why didn’t I ask”s with Spiral Stairs, Nastanovich waltzes with a Monotonix for We Dance) before the set ends with Kannberg guitaring inaudibly (Malkmus must get his amp adjustments in during soundcheck) while being passed above the audience’s heads.

Across on the Ray Ban stage, Fuck Buttons are on. They are two blokes standing opposite each other messing with samplers, one of them wearing a Mayhem cap (finally some metal!), with a massive disco ball behind them. They make pleasant white noise with a few beats and filthy sub-bass underpinning it and people try gamely to dance to it. A clue to why this is is provided when a random lady offers me MDMA (politely refused). The proper dancey punters are at the Vice Stage in front of Moderat. Their stage set up looks like a half-arsed Kraftwerk and they sound like I want to go home. So I do. It takes 15 minutes to get off the premises amongst an increasingly ghoulish and bedraggled looking crowd. A massive taxi queue means we choose to head past the snoozing human detritus on the pavements for the 5am metro. The security staff glare at the pasty bunch mooching on to the train and once onboard there’s complete silence, other than the American chap behind us, telling the world that his first Primavera experience was totally awesome.