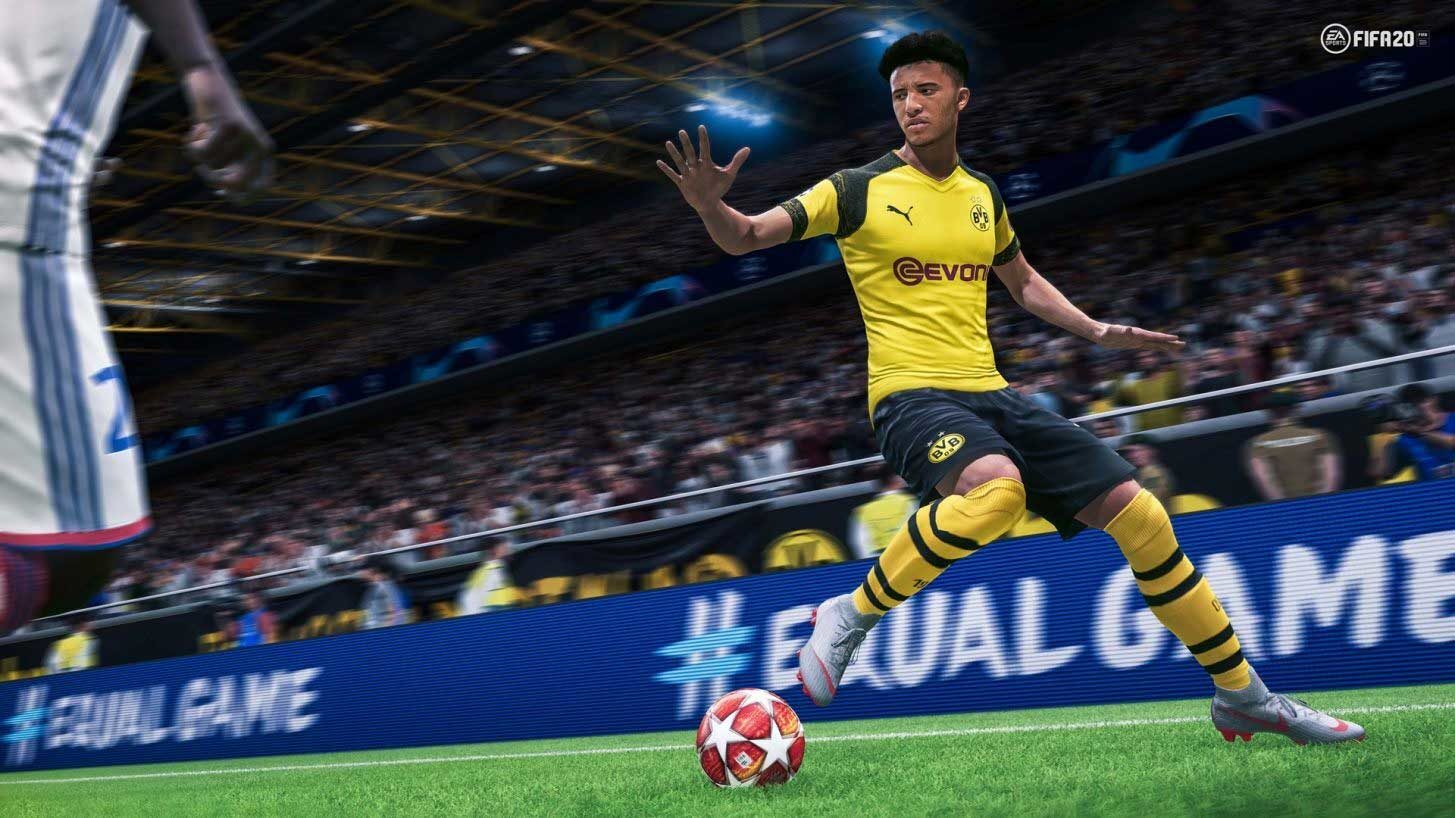 Meet the new FIFA. Same as the old FIFA. I was tempted to dig out the last FIFA review I did and change the number, but, let’s be fair, there’s been some minor tweaks and a colour palette change requiring my undivided for a bit. Fair’s fair.

Once you get past the shiny bells and chiming whistles of the opening sequence, once you get into settings and turn down the shitty music to zero, you can get stuck into the meat in this marketing sandwich. The actual pretend football.

Your match-day experience is largely unchanged. There’s still the irritating little cut scene with the lads warming up you can’t get past fast enough. Mid-game your right winger will disappear under a graphic telling you Mickey Quinn’s left Coventry for Newcastle, like you were watching the match at home with a tin in your fist and not trying to play the thing. It’s all part of the verity of the armchair fan’s perspective which EA correctly assume is the experience of the overwhelming majority of fans. It’s the tiny pixilated lads in the stadium I feel for. No one thinks about them, do they? And there they are, every game. Real fans, who now leave their seats and rush the hoarding when you score into the Kop end.

FIFA loves accuracy, to a fault. The reality of how a stand’s shadow falls across the pitch on a sunny evening might be worked out with a Keplerian precision, but it can mess with your vision when your little lads nip from light to dark and back again like a Mariah Carey mood swing.

The commentary is as you were, with the odd au courant tidbit here and there. Play enough matches and you’re mumbling the Alan Smith’s aphorisms to yourself before they even happen, like a mantra. If it’s raining, the lads piss on about it ad infinitum. Lads wearing blades. Impairing somewhat our vision. We’re nice and dry up here. Derek Rea and Lee Dixon sound like a good cop – bad cop routine from an episode of Emmerdale where a cow’s been rustled and they’ve been summoned from the nearest town’s cop shop to get to the bottom of it.

Gameplay, in a match at any rate, doesn’t feel much different. Which is fine. It had reached a place of sanguinity, once that impact engine guff was benched. AI teams defend in front of their box, so sliding a through ball down the wings to an overlapping full back is the way to. Because otherwise the defenders just stand there. Unmoving. Implacable.

If anything the same niggles remain, the feeling you’re not controlling the match, the narrative already written. When the AI invokes the Yashin Principle, you know, when their keeper stops everything, or the Ollie Reed Protocol, where everyone repeatedly hits the bar. Or the Sanchez Paradox, where previously solid performers forget how to pass and run into one another. Then the opposition score with their only shot on target, and it feels as if the result was pre-ordained and there ain’t nothing can be done about it. In these instances, the game changes format, from sports simulator to RPG. Meaning Random Pass Generator. (That’s the joke. Sorry. You can stop reading now, if you want. It’s not getting any better. That was it.) There you are mashing the Lump It button and your gnarly centre back will instead feather a lobbed pass to the nearest opposition centre forward. You hit the slide tackle but your Big Virg crumples like he went ragdoll in Goat Simulator. So far it feels as if games are heavily weighted towards late goals. It’s forced drama.

There’s no VAR. Not even a nod to it. No mention. No wankers doing the screen motions. No pauses while the ref looks stoically bewildered as he talks to the sponsors to find out how they want this to unfold. This can only be a good thing, even though I’ve been on the wrong end of some marginal offsides and the referees are still shitheads. There is, however, diving. You can’t control the dive, but players will throw themselves to the turf at opportune times. What’s the game coming to?

There’s other little deets that don’t reflect the changed world in which we live. Two weeks into Career Mode and Chelsea are throwing cash around like strops at Di Canio’s gaff. Where’s the transfer ban, lads? Neymar’s tattoos are there in their infantile glory, but the actual laws are not? And as we’ve all already probably heard, Juventus have been replaced. Undoubtedly this is punishment for the absolute fucking state of their new strip, and this is worthy of applause. Hipsters look away, there’s still no Boca Juniors. No Bomobanera? CALL THIS FOOTBALL? IT’S A SHAM!

I crunched the numbers on FIFA 19. It took 13,000 throw ins to finally get the ball to go where I wanted it, so the new free kick and peno mechanism looks like it’s going to take a while to master. On the surface it seems like an improvement on the Just Guess and Hope dynamic they had on the last few iterations.  Now there’s a target to aim at the goal, and a few options on how to hit the ball; with a bit of spin, say, or the “knuckle ball,” which is a phrase from baseball, a totally different sport, and has little or no relevance here because you’re gonna be using your feet. Do toes have knuckles? But hey, I’m pedantic, which is why I’m sat here writing shit and not living the dream in a cave somewhere under EA headquarters on whatever planet they live comparing unrelated sports LIKE A BOSS LOL.

Also in the Ring (or pitch or whatever) there are new ball physics, which frankly I’ve yet to notice. Even when my player’s bowling at the crease near the paddock, he left hooks the egg into the twenty two. But some fiddling with the options (I tell myself I won’t every time, but after my Star Striker piddles another shot wide, I can’t help but ramp up Shot Speed, drop down shot error. I’m not after a challenge, lads. ) you can watch the ball rip a hole in the space time continuum as it flies in, top bin. Or, if it’s Divvy Origi you’re in control of, enter the Earth’s stratosphere. Hey, for a game so hopped up on details, why have they got Divock’s hair wrong, again? He saunters around the pitch launching projectiles looking like a beleaguered Theolonius Monk. Except he performs like one put there to carry the piano, not play it. A bit of Shanks there, showing my pedigree. Speaking of Shanks, that’s half your shots, that is.

Relax, everything’s tweakable. You can’t complain about the opposition goalies being too good when you can reduce their ability to nil. If it’s a frictionless 8-0 every game you’re after, fiddle with the settings until it’s in Toddler Mode or play against Watford every week. Don’t put it in Legendary mode and then complain you can’t get the ball, you dozy prick. And after all these years, it may be time to wrestle with the tactical defending. It’s more “rewarding” we’re told.

There’s a “new” playing mode, VOLTA, which isn’t new it’s just FIFA Street with a different name. FIFA Street. Yeah, it was a thing. Ask your parents. You can toss about three on three on a tiny pitch in a garage somewhere, doing flicks with an Adidas Tango (nice touch) and wearing Stussy if that’s your thing. It’s better than that Journey yoke they had which has been thankfully binned, but Volta does contain some kind of story mode I’m not going to bother looking at. Soz.

You can, if you wish, get involved in that FUT palaver. Nothing’s changed there. Why would it, it’s a money spinner. Pro Clubs involves all kinds of revamping that’s pure gibberish to me. Personally,  it’s always Career Mode I crave. I’m not into playing against ten year olds online who’ll either batter me, or disconnect once I score. Nothing beats scouting a promising 15 year old and watching him develop into world class over many seasons and realising I love that guy more than my own children and my youth’s gone behind a cloud, age has darkened my features and I have responsibilities and what the fuck am I doing playing this game? I remember FIFA 95. Toni Polster rinsing Liam Daish. Peter Beagerie. It had an indoor five a side option. That was class. Bring it back. ISS Pro. Ziderm. Rivalno. I remember International Soccer on the Commodore 64, where primary coloured blobs “kicked” a square across an expanse of green, and how we cheered! Nowadays you can’t move for fucking football. Back then we took it where we could. Subbuteo, the streets, The Screen Sport Super Cup. Fuck this, I’m turning this shit off…

HOLD THE FUCK ON. You can edit your manager avatar like it was in the Sims. I’m giving myself some hair. A Pep sweater. Some nice brogues. A woolly hat I can wear to tense negotiations with the agents of players I want to let rot in the stiffs, despite my crazy promises. Where in the past all that stuff was done in the manager’s office, now we can have secret assignations in fancy looking hotel rooms, a table at the local Bistro. A dingy Services on the A25. All in my Pep sweater and beanie. Maybe I’ll get my manager avatar to wear a suit for the League Cup third round away. You can now reply to annoying players who demand time on the pitch by telling them to get fucked. Watch his morale slide to left like a greased deadbolt. And look at this! Post-match interviews in front of a board of advertising, like you were on TV? Apparently what you say helps with squad and player morale. Stuff like “All credit to the lads,” and the guy you’ve just told to get bent is in clover again.

How long until that becomes a groaning pain in the arse?

Previous
Autre Monde – On The Record